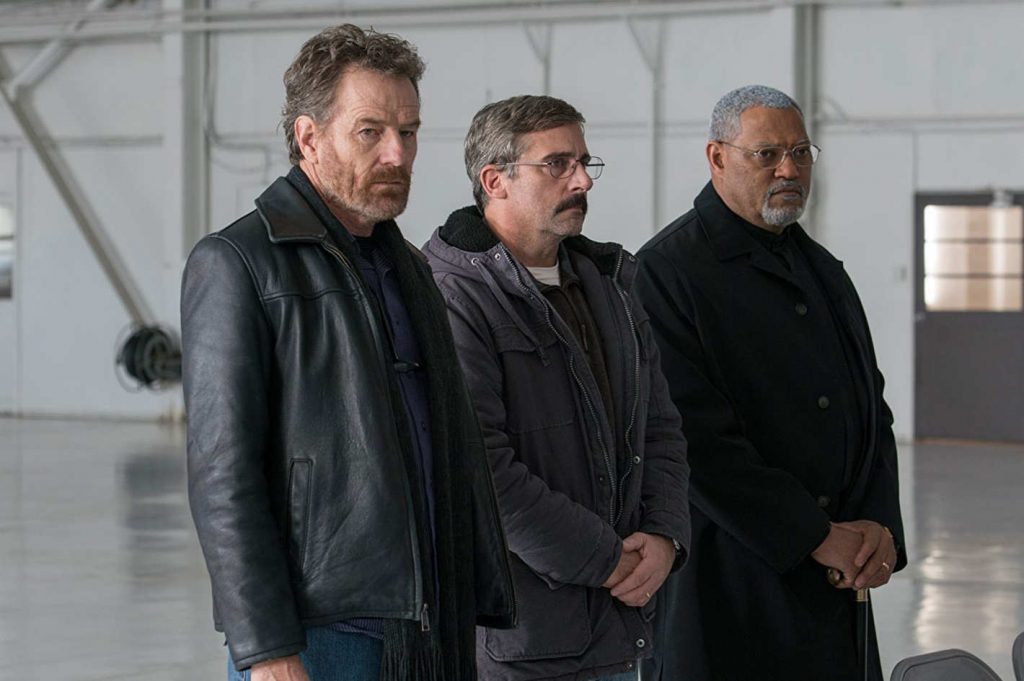 Richard Linklater has directed some of my favorite films of all time, so I didn’t hesitate to catch a viewing of his new film Last Flag Flying. It’s a spiritual sequel to The Last Detail, in that it tells a simple road trip story about three aging Vietnam War veterans in 2003.

One of those veterans (“Doc,” played by Steve Carrell) has recently lost his son to the horrors of the Iraq War. His fellow former marines (Sal, played by Bryan Cranston and Mueller, played by Laurence Fishburne) embark on a quest to help Doc bury his son at home in New Hampshire instead of at Arlington Cemetery in Washington D.C.

“I’m not going to bury a marine,” Doc says. “I’m just going to bury my son.” If that sounds unpatriotic to you, then Last Flag Flying has you on its allegorical mind.

Throughout Last Flag Flying, Doc faces an existential crisis of sorts. This is a man who served his country and ended up in a US Navy prison for a bad-conduct discharge. Later, he got married and had a son. His son grew up wanting to become a marine. Then he became one and lost his life.

Doc himself comes off as a passive, despondent person caught between two boisterous personalities. Sal plays the devil on his shoulder, urging Doc to make choices that feed into his own personal morals, regardless of how they affect others. While Mueller, a now reformed pastor, counsels Doc through prayer and cooperation. But as the conflicts between Sal and Mueller intensify, lessen, then intensify again, you begin to see common ground between all three men. That no matter what the government did to them or what they may think of their country’s failings, they’re still marines.

How do you display patriotism when the country you want to respect has lost its way in your mind? If you commit to blind loyalty and allegiant ignorance, then you can be accused of complicity and moral relativism. But if you protest your country’s wrongdoing, you can be questioned for your love of country and the greater good. Is there common ground between audacious truth-telling and reverence? Last Flag Flying makes that case over the course of two hours and arguably chooses a side by the end.

I’ll be honest. I’ve grown up resentful of particular marines. I constantly have to keep myself from generalizing servicemen, for that matter. I show outward respect, of course, but inside, I bury a prejudice and fight it however I can. This is because some of the women closest to me, one of them including a family member, have been abused by marines, both emotionally and physically. This is partly why I’m fascinated by war movies. I want to fight my prejudice with empathy and fairness toward the men and women who serve. Every person deserves to be evaluated on their own terms.

I appreciate Last Flag Flying, in part, for that reason. It reckons with the brutal personal fallout of service without disingenuously glorifying it, or even giving it a pass.

“They sent him off to a godforsaken desert. Why?”

Maybe the conflict between patriotism and war-mongering is best realized through conflicts between three very different marines. I’m not sure, yet. I know that Last Flag Flying is a challenging watch that I suspect I’ll enjoy more the second time. I’m not recommending it as some sort of triumph of cinema with universal acclaim tattooed across its back. The movie is quiet, subtle, and specific. It’s a dark drama about grief with slivers of humor and heart. Those are some of the hardest stories to love, which is why they’re among the hardest to tell.

Some will find Last Flag Flying dull while others will find it invaluable. I’m somewhere in the middle.

6 thoughts on “Last Flag Flying: When Loving Country is as Easy as Hating It”