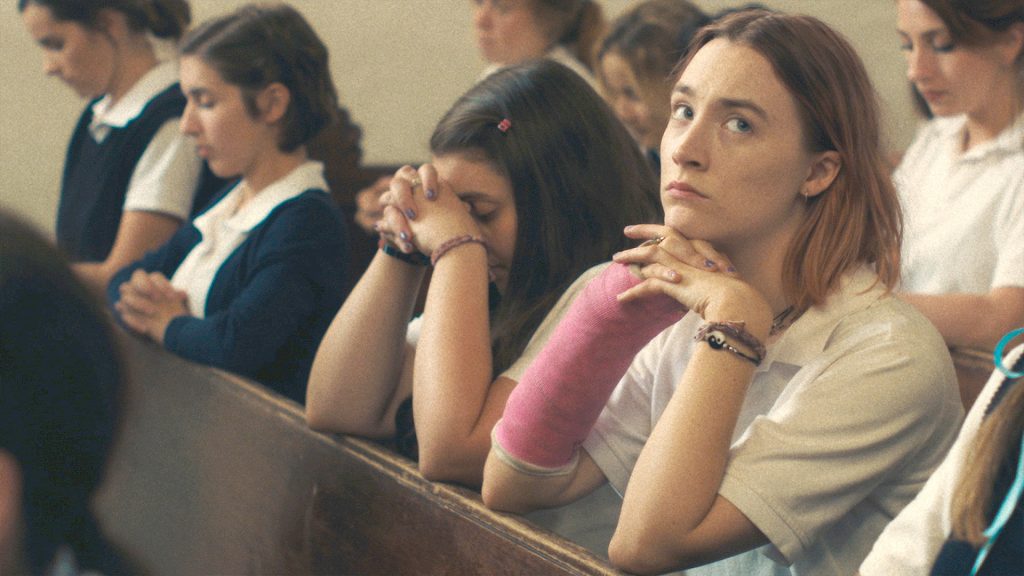 Our lives are a string of incidental situations, or events. Some of these events are caused by other events. Many events are indistinguishable from coincidence. They appear chaotic and might as well be.

I found myself thinking a lot about structured chaos while watching Lady Bird. It was only after the credits rolled that I clicked with director/writer Greta Gerwig’s “point,” so to speak. That she desired to bring about meaningful change in Lady Bird’s life through both choice and conflict. Not much else.

There’s a reason why critics adore this movie. And I also suspect there will be some general audiences who disagree with the praise. This is because there are some among even the most fervent filmgoers who measure the quality of a film by its trappings. The dialogue. The cinematography. The performances. These are all important, of course, but they don’t amount to much removed from what the events onscreen  mean. Understanding this is the first step to “getting” objective film criticism as a whole. Even if you don’t necessarily agree with it.

A lot of film criticism relies on referential name-dropping (“this movie isn’t as good as this other movie from ten years ago”), and this isn’t inherently a bad thing. It’s usually quite useful. If a friend asks me what they think of Lady Bird, I’m going to ask them what they think of Noah Baumbach’s films. Or if they’ve seen any performances by Greta Gerwig. Or if they’re familiar with the acting career of Saoirse Ronan. I can then explain the similarities and let this person decide if Lady Bird is a movie they have enough premeditated interest in to give the film a fair shot.

For some, it’s an easy sell if a given movie, like Lady Bird, has reached universal acclaim. The problem is that audiences aren’t going into films looking for the same things that a film critic might be ready to observe. It’s often said that the cynicism of film buffs is that they’ve seen it all before. They have a harder time enjoying many films because very little of what they see is “new,” as if familiarity is some sort of poison to a good time at the theater and raw experimentation for the sake of it is instantly held as a value prioritized above structure and cohesion. Regardless.

I went into Lady Bird with some worries.

What if I didn’t find a film about a teenage girl relatable enough? I often enjoy films that take me to new worlds and put me in the shoes of someone I don’t easily understand, but I also abhor other films that do this poorly and feel boring as a result. The conflict that enters Lady Bird’s life is very specific: she wants to live somewhere with more culture, she doesn’t get along with her mother, and her love life tends to break just as easily as her arm.

You can watch this movie and perhaps relate with one or two of these conflicts. And that will surely enhance your experience with the movie. But that can only go so far to make a movie good, at least in your eyes. It’s the change through these conflicts, told through events, that we derive meaning. Lady Bird is essentially a string of incidental situations edited down to showcase one meaningful change in a young woman’s life. Well, two actually, but they’re related and I don’t want to spoil anything.

Change in a film can be a lot of things. It can be Bruce Wayne as a kid with deep fears and regrets, only to become a masked hero by the end who conquers fear to save lives. It can be as simple as a character being alive in Scene 1, but dead by the time the screen fades to black. We don’t criticize Batman Begins over a lack of relatability to Bruce Wayne’s crime-fighting career and riches. Many of us love Batman Begins because we can relate to the meaning found in how Bruce conquers his fears.

In Lady Bird, Gerwig expresses her point of view on how relationships (especially with parents) sometimes hurt the most before they start to make us better. And how our choices tend to drive these conflicts, even when it seems like the bad in life is coincidental or chaotic. This is what makes Gerwig’s otherwise standard coming-of-age story feel new, by choosing a unique location in Sacramento, lending Lady Bird a fresh voice for Ronan to fill, and many other aesthetic decisions that flesh the world out as both original and bright.

I sometimes feel exasperated when trying to explain why a movie I like is “good” to someone. We worry that our subjective experience won’t translate. That they won’t “get it” like we did. And that’s fair because many bad movies intend to have profound, relatable meanings, only to fail for reasons too nebulous to get into. But when trying to identify what makes Lady Bird particularly memorable to the point of topping year-end lists, I find it smarter to avoid the usual discussion around trappings and other tangential details that lend themselves more to subjective nitpicking.

I can’t help but dig into the precise moments when Lady Bird felt its most authentic and used specific moments to deliver its point. It’s not just that the film has good pacing and you don’t notice the time go by. It’s that the film is brilliantly edited to cut through large swaths of time in Lady Bird’s life that convey the entire spectrum of change found in a single year (2003, of course). Put more simply, I was able to feel how casually time passed in Lady Bird’s life and how that might have believably set up certain choices she makes in the third act, defining who she’s going to be when the story ends.

When you believe the change onscreen, it allows for self-reflection. Even empathy. And when a film gets us to open up to even a modicum of honesty about ourselves, each other, and the world, it’s easy to point to the work as being “good.”

7 thoughts on “Lady Bird: Understanding What Makes A Film Good”