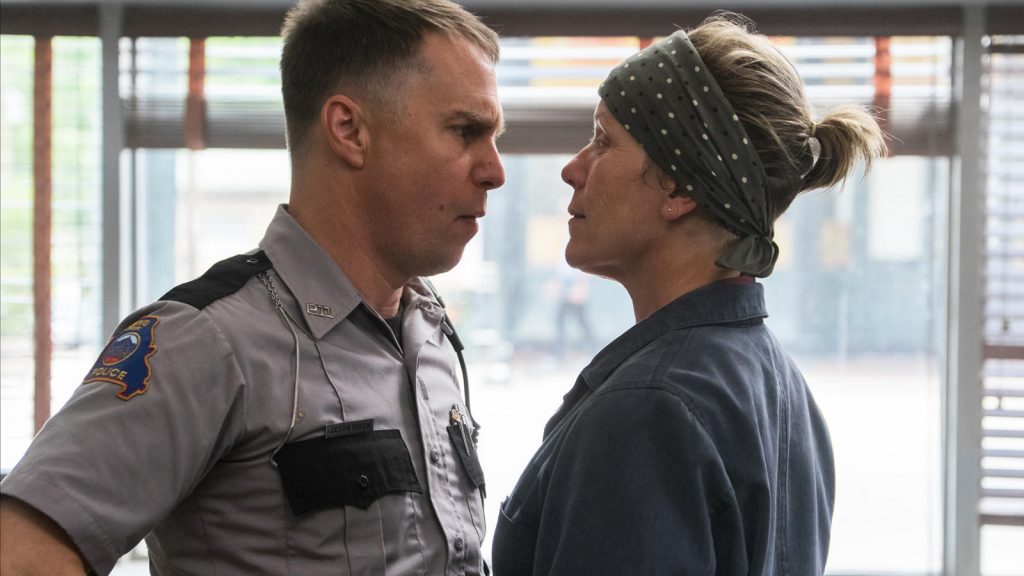 Three Billboards outside Ebbing, Missouri is the actual name of a prestige film in 2017. Naming movies is hard, no?

On the one hand, this title reminds me of the suggestive power found in names of short stories. A lot of contemporary short stories have this stylistic flair, like a recent one I enjoyed called The Shape of the Darkness As It Overtakes Us by Dimas Ilaw. For whatever reason, short stories lend themselves nicely to intriguing “sentence titles,” while novels and movies typically go for the short punch. Just as look at Disney and Pixar: Tangled, Frozen, Up, Coco.

In a strange way, Three Billboards is like a short story. It’s a dark comedy you’ll hear heavy praise about in the coming awards season due to its perfected dialogue written by director Martin McDonagh and how much of a thrill it is to watch Frances McDormand process anger in a movie about flawed people desperate for justice. But like a short story, Three Billboards feels intended to pass you by without offering resolution. It’s niche. It’s focused. And it’s not concerned with what you think about it.

I watched this film with a good friend (we’ll call him Brian), and after the credits, we walked outside the theater for a few minutes to talk about what we had seen. To be honest, neither of us had anything particularly compelling to say, so the conversation drifted to weekend plans and how our loved ones are doing. At one point, Brian pulled out his phone to find out his girlfriend had seen Three Billboards at the same time as us, but about 40 miles away near where she lives, and it was at this precise moment that we both felt obligated to start articulating our opinion. After all, she didn’t hesitate to call it “gnarly.” What were we waiting for?

Despite all this pressure to deliver a knockout review and impress Brian’s girlfriend via text message, we both came up short.

We could agree on a few things. Three Billboards is unconventional. It’s hard to watch at times, not for any disgusting reasons, but because of the normalization displayed when it comes to race, homophobia, and frankly realistic attitudes one will find in just about any small town in America, let alone Missouri. We both enjoyed the surprising arc had by Sam Rockwell’s character, a fascinating study in redemption that will surely and perhaps rightfully annoy critics of softened, vulnerable bigotry, though others will appreciate the attempt at humanization without glorification (Rockwell at no point is presented as a hero).

Coincidentally, I watched another film that tapped into this cultural pressure point not long after seeing Three Billboards. The new Netflix film, Mudbound, which is another Oscar contender, gets under the skin for the same reasons, but heightened by the sheer drama of its presentation. This is a serious epic, Mudbound, and it’s faint in its hopeful summation. When Three Billboards presents itself as a comedy (dark as it is) and proceeds to balance genuinely amusing scenes with an unpredictable story, you can find yourself affirming its blunt take on 2017 America.

Yet Mudbound — a film that doubles down on the misery, complete with arguably equivalent performances in terms of talent and caliber — feels like the less consequential film, in my opinion. Both are tremendous works, and Mudbound is certainly a more important film generationally with few major flaws to pick at. But come 2018 and beyond, Three Billboards will have left the lasting impression on me. And I have to believe the name of the film will be a small reason for that. It’s a simple, matter-of-fact stretch of words that doesn’t presume to be much more than a window into one specific, complete thought.

Perhaps that is why I had a hard time evaluating Three Billboards so soon after watching it. When we experience a story that overwhelms us with message, we can scramble a bit to decide if this an objectively good message for the world. Before we can get to discussing the technical and spectacle, we’re left to wonder if the movie should be deemed bad by unseen forces because it doesn’t align perfectly with a worldview we find readily appropriate. You can be confident in your worldview when watching film, but it’s also helpful to be confident in everyone else’s, too, hoping they approach subject matter with an open mind before diminishing any aspects they immediately disagree with. Not too unlike the way we might disregard a film altogether over a simple detail like its title.

6 thoughts on “Three Billboards outside Ebbing, Missouri: A Film Better Than Its Title”