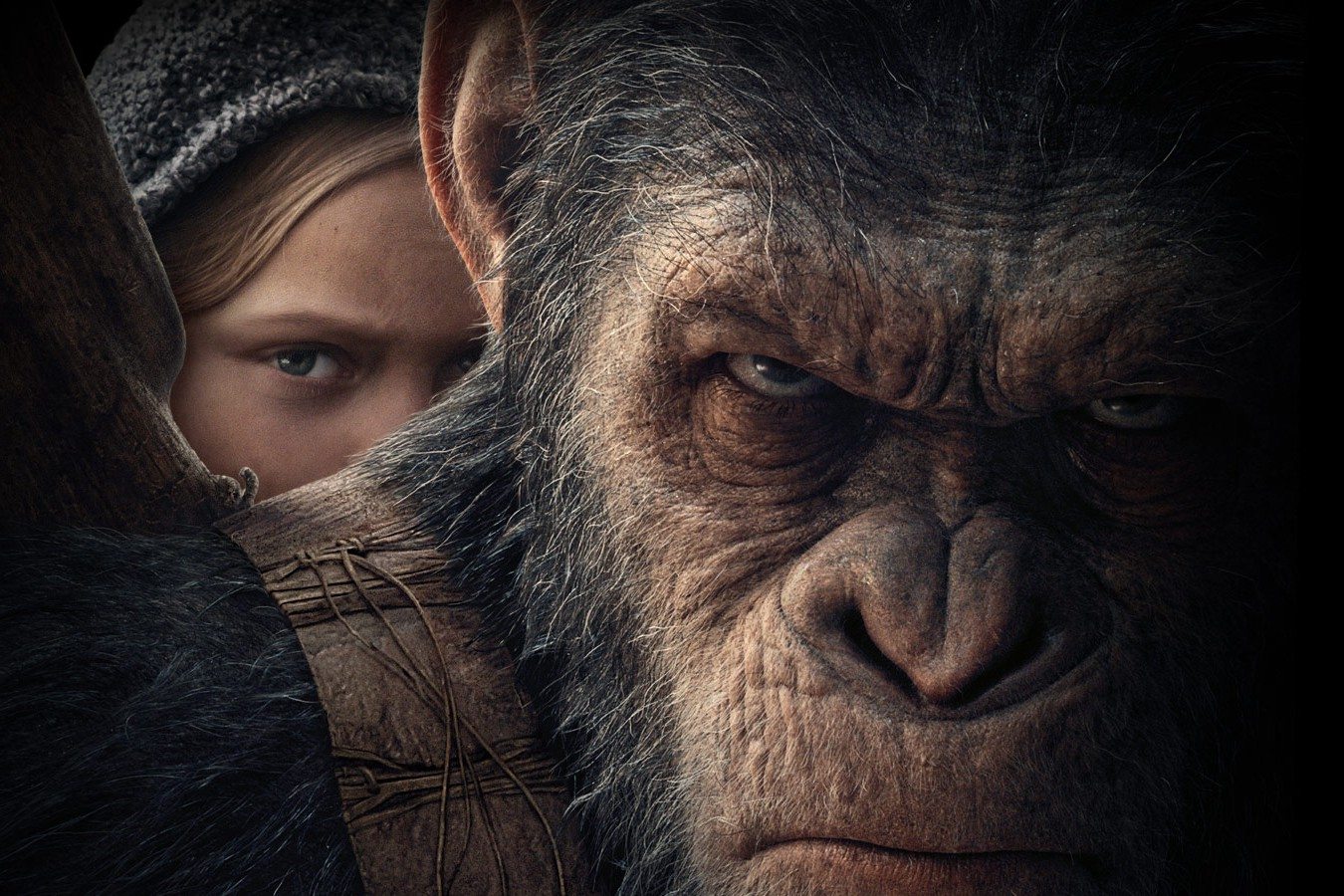 War for the Planet of the Apes is the final film of the prequel trilogy based on the 1968 classic Planet of the Apes. Once again, viewers step into director Matt Reeve’s post-apocalyptic version of a world where a micro-colony of hyper-intelligent apes led by the world-weary Caesar must fight for their right to exist against humanity’s last stand.

The central conceit of this prequel trilogy has been to follow the evolving humanity of a brilliantly realized character named Caesar (brought to life by stunning motion capture and played by an Oscar-worthy Andy Serkis).  It’s clear at this point that Caesar is one of the greatest film characters of the 21st Century, born in Rise of the Planet of the Apes and fully realized in Dawn of the Planet of the Apes.

This new film takes Caesar’s journey to its most desperate state. After two years of evading the last of humanity’s armed forces, Caesar’s nomadic colony of apes are brought to their breaking point when a ruthless colonel (played by Woody Harrelson) finds their hiding place and forces the apes to go on the run. Caesar craves revenge, however, and sets off on a journey with his closest confidants to discover what the humans truly have in store for his apes.

To say more would be to rob the viewer of War‘s signature delights, a twist-and-turn narrative that is more interesting to follow along with than reflect on for the most part. The first hour of War is easily its strongest, perhaps because it focuses the least on its human characters, who at this point in the series have nothing to offer narratively against the vastly more compelling ape characters, including newcomer “Bad Ape” played by Steve Zahn in one of the film’s stealth heart roles. When Harrelson’s character (a blatant play off of Apocalypse Now that feels better suited for neo-nazi commentary) lays out much of the movie’s subtext later in the film, War struggles to recover despite having so much to offer in other respects. 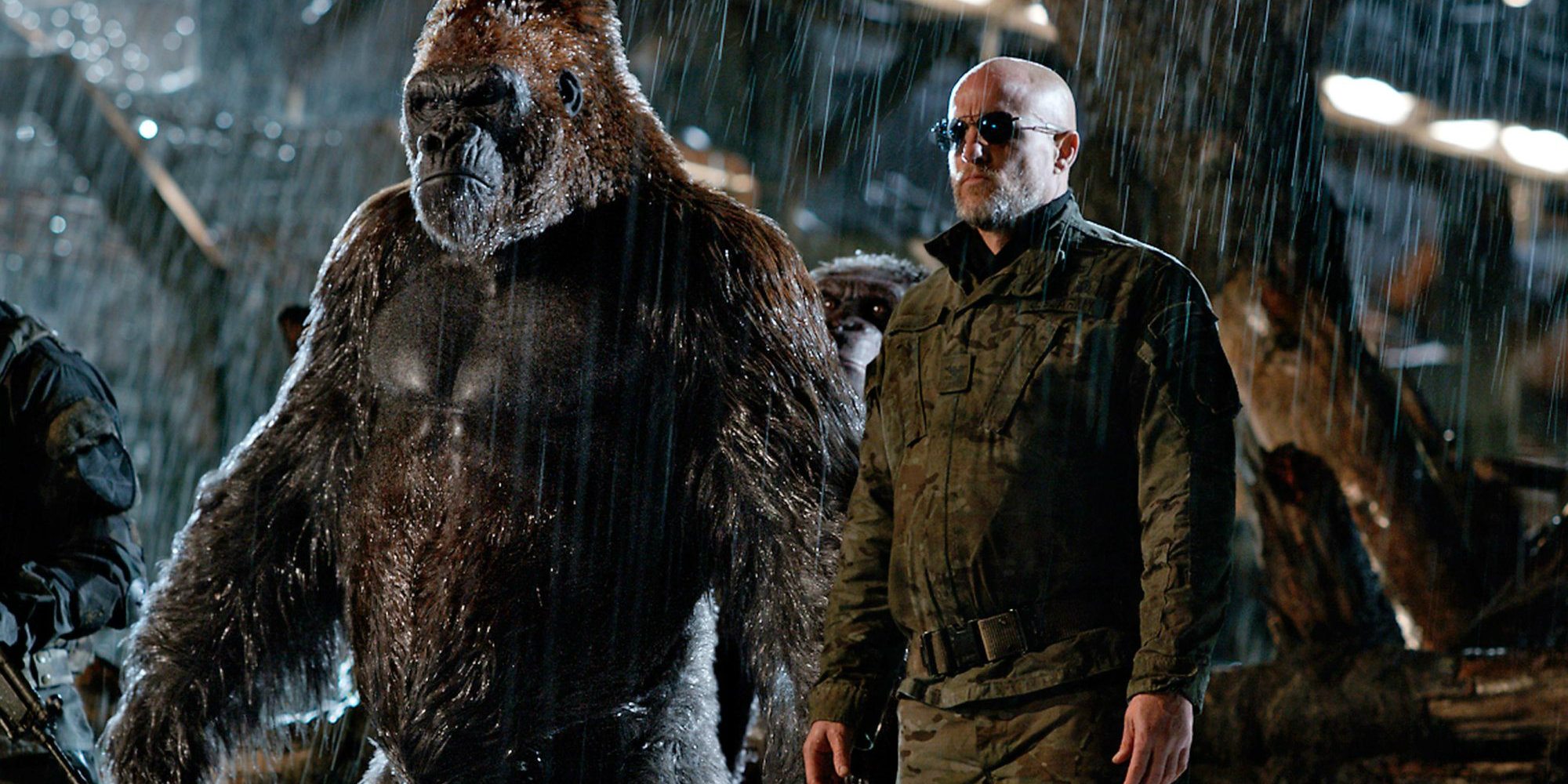 If Dawn of the Planet of the Apes was akin to The Empire Strikes Back, then it suits War for the Planet of the Apes to take on the role of Return of the Jedi and a fraction of Rogue One, actually. It contains some of the most mythologically poignant scenes in the entire trilogy, a rapturous score by Michael Giacchino, the boundless talent of Andy Serkis, and an effortless ability to fool the audience into rooting against their own species.

But War also suffers from immense implausibility in one too many action set pieces, one-dimensional human characters, an overabundance of storytelling tropes that range from western to POW, and an overlong second act that is undercut by an almost silly conclusion (though that itself is followed by an epilogue that may go down as one of 2017’s best film endings).

War for the Planet of the Apes is a film of contradictions, some of them serviceable to the plot and others that are hard to dissect once the film lets you out of its grip. It doesn’t take long for the audience to realize they simply want to see a movie with only these apes while humans pushed far into the background, which in itself is a narrative flourish that paints the classic 1968 film in an incredible new light. Technology has caught up with this thinking man’s sci-fi, so why hasn’t the story?