Guardians of the Galaxy Vol. 2 picks up right where its predecessor left off both story-wise and in regard to its timeline. Just a few months or so after the a-holes saved the galaxy and became a family, Peter Quill, Drax, Gamora, Rocket, and Groot embark on a new adventure that does something most sequels don’t really do. Rather than go bigger and double down on beloved set pieces of the first film, Guardians of the Galaxy Vol. 2 goes smaller and more introspective.

Comparisons will undoubtedly be made to the first two Star Wars movies. The first Guardians was a rollicking space adventure that lampooned the hero’s journey (specifically the “chosen one” trope) and won a lot of hearts through surprise in its ensemble storytelling. It was A New Hope, but for a new generation. In the same way, director and writer James Gunn clearly crafted this follow-up to be Empire Strikes Back, but not really in terms of being “the dark one” where everything goes wrong so the third movie can wrap things up. No, Vol. 2 is very much a standalone sequel, as Dave Schilling poignantly put it in his review.

The story this time around follows the Guardians of the Galaxy taking on a big mercenary job for a group of gold-skinned “conceited douchebags,” capitalizing on their newfound fame as “one-time galaxy savers.” Thanks to some mischief from Rocket, however, the team is chased through a dangerous asteroid field (one of many clear homages to Empire that’s played for laughs) and forced to crash on a nearby planet.

The team splits up at that point (Empire, again) and gets hounded by some old favorites from the previous movie. Yondu and his Ravagers are after the Guardians again and Nebula has Gamora-sized tunnel vision, looking to settle their sibling rivalry over one last fight to the death. There are some other big developments, including Peter’s own struggle with some planet-sized daddy issues that were hinted at during the end of the first film, and there’s a subtler twist going on with Drax, who has become the de-facto heart of the crew in surprising ways, pairing up with newcomer “empath” Mantis for some of the film’s best moments. 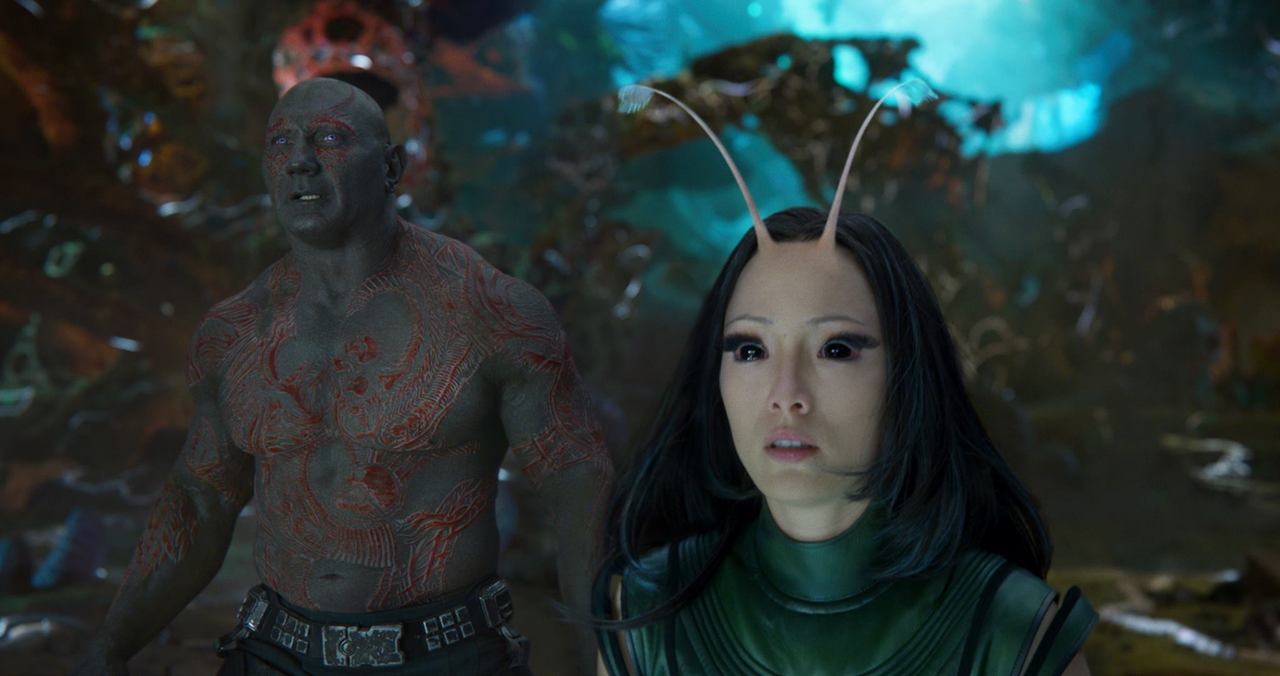 In some ways, Vol. 2 is as much a paradox of space opera as it is a parody of it. The heroes of the film go to far fewer locations, the main threat of the film is more ambiguous this time around, and even the mixtape has been altered as a plot device. In the first Guardians, “Awesome Mix” was a clever musical tool used to illustrate moments when the team would gel together and prepare for their best moments. It was loud, fun, lively, and reflective of the movie’s tone. The music in this film truly acts as a “B-side” with some tracks that are less familiar, but also deeper. Gunn has crafted a personal story that departs from a lot of what fans loved about the first film by giving them something they might not have known they wanted.

For some, that will amount to major criticism over Vol. 2 being a massive departure from much of what worked in the first film. Yes, the humor is still there in force, but in almost every other respect, Vol. 2 tries hard to make you feel something new about these characters, the universe they inhabit, and what you’re generally looking at. I’m not sure space have ever looked so beautiful the way Gunn and his team see it, rivaling Doctor Strange for sheer insanity in its colorful vignettes of time and space. The paradox, though, is in how these characters are ultimately simpler than the intricate comic-lore heavy environment they inhabit, just as this story tends to be at times, for the better.

That’s probably Vol. 2‘s greatest asset. It exists solely to exist on its own terms, not as a crowd-pleaser or recapturing of previous success. Despite releasing in May, it still aims to be an “August movie.” It does what most sequels should aspire to accomplish in the same situation, especially when following one of Marvel’s best films, period. Vol. 2 is technically a better film and a must-watch for Marvel fans, but more importantly, it’s a great example of how successful a film can be when put in the loving hands of a trusted visionary who doesn’t really care what detractors may think.

4 thoughts on “Review: ‘Guardians of the Galaxy Vol. 2’ Doesn’t Really Care What You Think”