In The Circle, our world of disruptive technology from social media to search engines has been conveniently consolidated into one uber-corporation called, you guessed it, The Circle, a simple name for what is strangely a shallow, unimaginative invention representative of what our near-future might be ruled by. Sharing through technology. Although…isn’t that already a reality?

Rather than take us through the implications of our world’s current affair with technology, the fictitious Circle and its inner leaders want to remove all privacy from the world in an effort to create true transparency. If you’re wondering “why” they want to do that, well, this movie clearly wasn’t made for your curious mind. “Sharing is caring” the employees echo to their leader, Eamonn Bailey (Tom Hanks), who advocates a master plan that has all of the absurdity of a 70s paranoia thriller without any of the logic or intelligence.

Much of The Circle takes place behind the eyes of Mae Holland, played joylessly by Emma Watson. Playing off of the geographical diversity of the San Francisco Bay Area, Mae is a small-town working millennial who is swept away to work at the idyllic Circle, an amalgamation of Silicon Valley tech clichés rolled into one hipster paradise. Mae is initially overwhelmed by the workplace culture of The Circle and its astounding obsession with invading her personal life through bombarded questions about her father’s very personal health issues, played off as a quirk she immediately embraces instead of questioning them in horror.

It’s this type of nonsensical character behavior that plagues The Circle throughout as both a screenplay and an adaptation of the book by Dave Eggers. Director James Ponsoldt (The End of The Tour) weaves a fragment of a movie looking for basic conflicts, antagonists, and even a protagonist, as Mae’s shaky motivations take her on a journey of discovery (maybe?) that is incomprehensible up to the final frame, partly blamed by a ham-fisted performance from Watson.

The pieces of a sleek and provoking paranoia thriller are there, but they’ve been hastily rearranged and badly edited into a montage of unbalanced storytelling that ranges from horrifying to “OK, that would never actually happen.” At about the halfway point, the audience is finally clued into The Circle‘s self-imposed meandering when Mae goes “full transparent” and starts broadcasting every moment of her life to millions of people, frustrating the viewer with endless questions about…well, everything that sort of lifestyle implies. The Circle hardly ever explains itself, the technology, or why many of the characters (John Boyega and Karen Gillan, for instance) are even in this film. 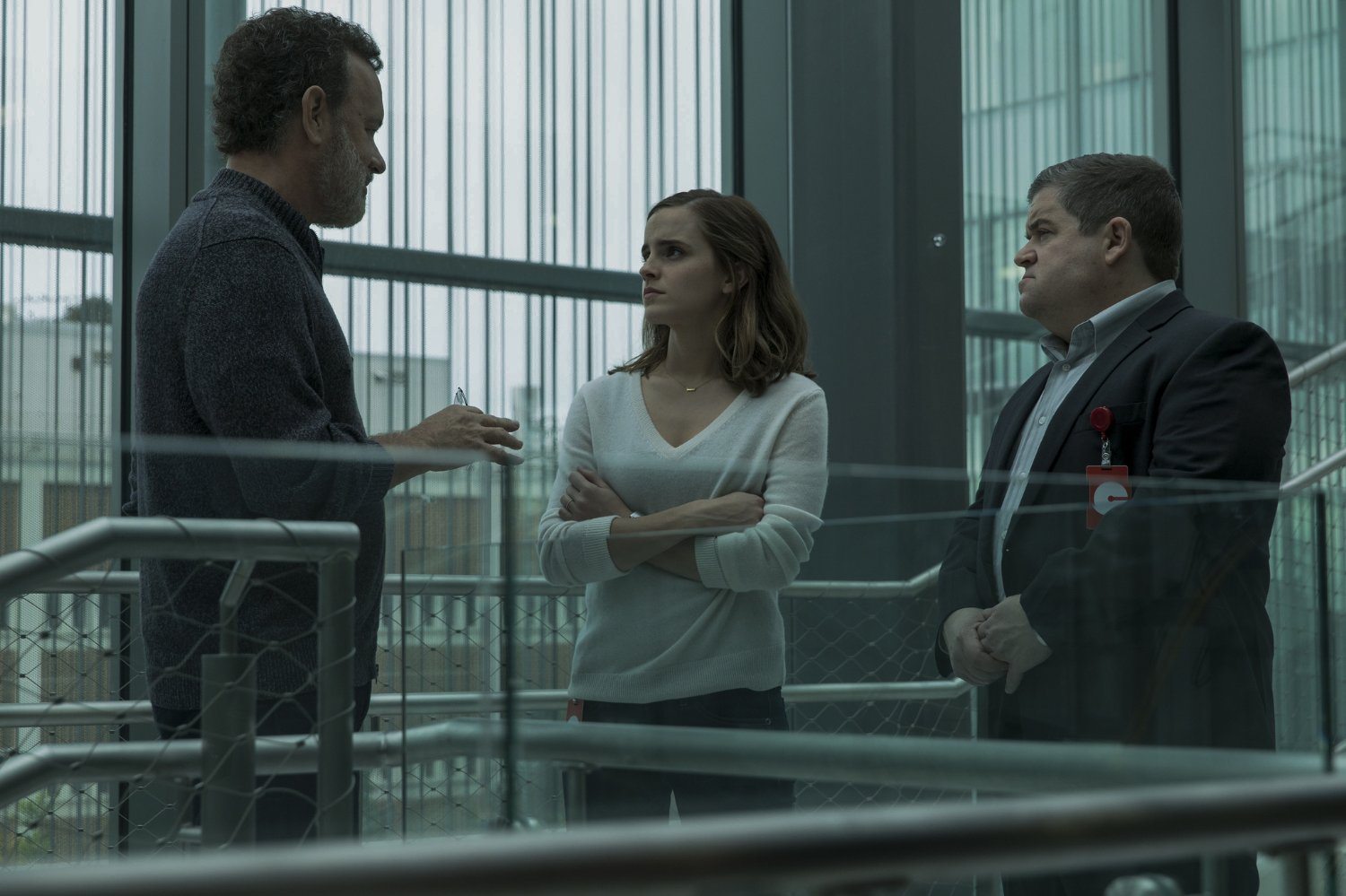 The Circle has a slew of intriguing ideas that it wants to say about privacy, data mining, humanitarian endeavors, and how much control we give to others when it comes to our personal lives. It’s great fodder for a novel, but less so for a compact movie desperately in need of a purpose to drive these characters. Not even the motivations of our proposed antagonists (maybe?) are all that clear or in conflict with our supposed protagonist. And it all amounts to a frustrating movie that is easier to hate-watch for all of its blatant inaccuracies and logical leaps about what would really happen if an American tech company scattered countless HD cameras across the world without any hint of an international incident.

It’s a reckless, brainless mind dump of familiar sci-fi ideas we’ve already seen before in real life and with more meaningful, thoughtful consequences. The Circle is too silly and irresponsible with its themes to take seriously, and it’s unfortunately dragged down even further by sloppy filmmaking.