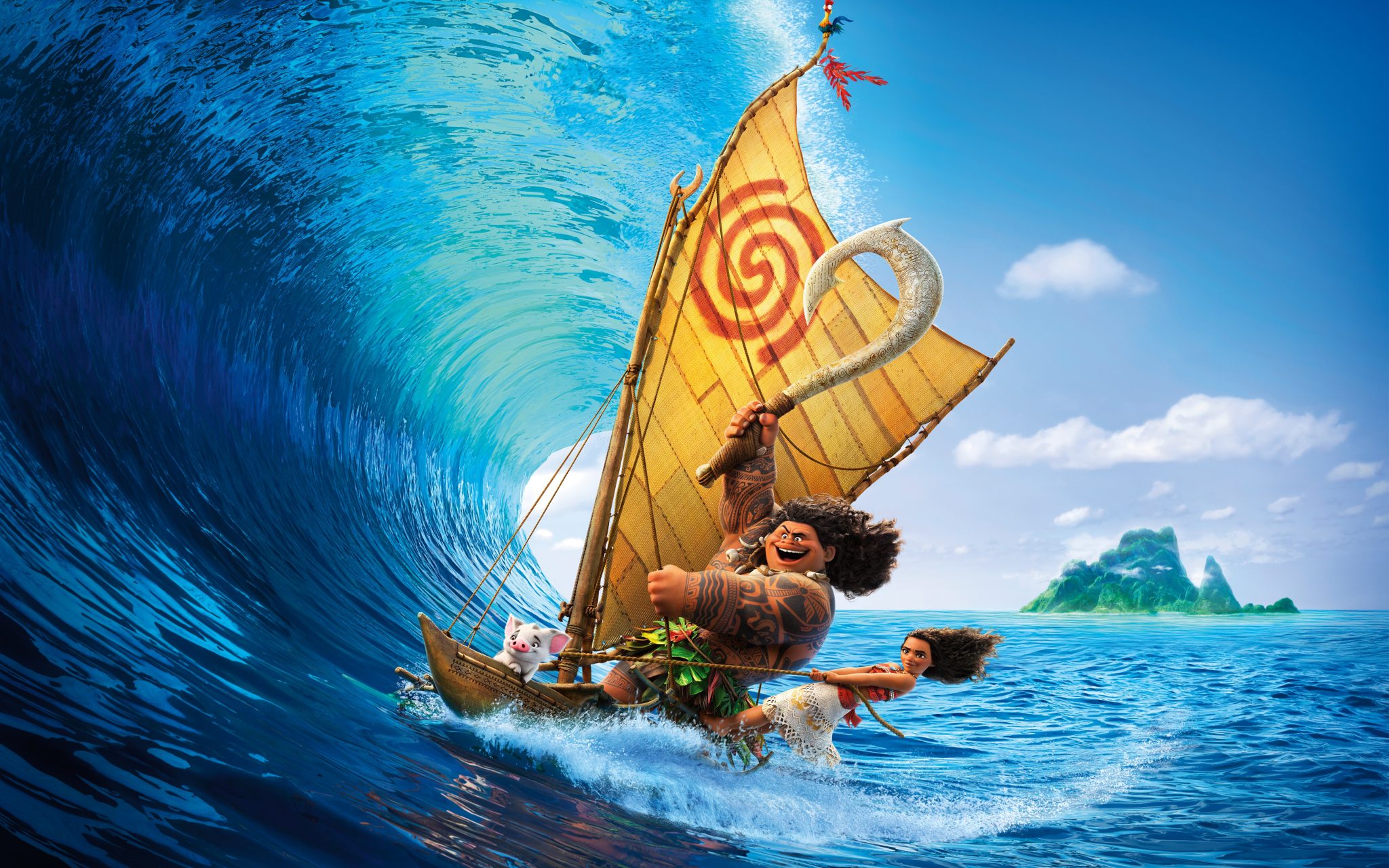 Snark + Sarcasm = what you’re about to read

I correctly predicted that Zootopia would beat out Moana for Best Animated Feature at the Oscars this year. Not because Zootopia deserves it, but because I know an Academy Award winner when I see it, borrowing from the same universe where a socially relevant movie like Spotlight will outshine the crowd-pleasing favorite for Best Picture. Only in this case, Zootopia happens to be a favorite among many Disney fans, as well.

My issue with all this is less an attack against Zootopia and more a lament for how under-appreciated Moana is as both a movie and one that happens to be made by Disney. If you slapped the same movie with the logo of any other animation house, it would deservedly be hailed as a new classic and breath of fresh air. But as we’ll get to in a minute, Moana is dragged down by baggage it didn’t ask for, and in many ways, went out of its way to defy.

Why? Because film critics can be a bit lazy. They see something that sort of resembles something else and jump at the chance to make a comparison, usually knocking the film down because of their pseudo-intellectual word associations and cultural references, as if film borrowing inspiration is something to be ashamed of. This is a persistent annoyance with reviews for animated films because nearly 80 years after Snow White and the Seven Dwarfs, some critics are still refusing to take the art form seriously. Seriously.

Thankfully, most critics do appreciate good animated movies and approach them fairly. Of course, there were a small amount of unfavorable reviews for Moana in November, but most of them were perfectly fine for what the reviewer was trying to accomplish, which was a basic interpretation of their own subjective take on the film. But one in particular caught my Snarcastic attention, not because it was badly written or as outrageous as what I usually bring up in this column, but because it’s so tragically misguided in its bias. It’s also a summation of the criticism received by many who did like Moana overall.

To Rizov’s credit, he really does go into detail over what makes Moana a technical achievement in animation, so let’s focus on his main argument, that Moana is same-old, same-old for Disney.

In a way, that’s true. A young “princess” is the heroine, and she has to go on an adventure to save her village. Of course, most movies can be boiled down to a well-established plot structure, but we forgive it because of everything else that happens on top of the familiar “good vs. evil” and “buddy cop” tropes that show up again and again. Let’s see why Rizov disagrees.

Moana is an animated film of the subgenre codified at the start of the ‘Disney Renaissance’ by 1989’s The Little Mermaid.

Oh no. He’s not about to compare Moana to Little Mermaid is—

Both films are co-directed by Ron Clements and John Musker, and start from the same premise:

a young woman next in line to be queen/chief

OK, hold on. Ariel from Little Mermaid was not next in line to be queen, and in fact, Triton never even implies that her future has anything to do with running the kingdom. Rizov even has to point out here the difference between “queen” and “chief,” which is already a false comparison of the two movies in order to argue that Moana is somehow formulaic. But let’s keep going.

chafes at the for-safety’s-sake boundaries imposed on her.

Two huge differences you leave out, Rizov. First, Moana actually accepts these boundaries over the course of the first number, which chronicles how she chooses responsibility and duty over her own personal desires. It’s only later out of necessity that she challenges this authority, but it’s a far cry from the rebellious personality had by Ariel, who was going behind her father’s back in perpetuity before the movie started.

The second difference is that Triton’s hatred of humans is never really justified in a way that makes sense. Why are the aquatic folk so scared of humans? These rules come off as very authoritarian, which makes sense for a 1989 movie. But Moana actually presents a believable case for why the chief is so against their people (not just her) venturing beyond the reef. He’s given a backstory, and the script treats Moana’s father as a complex character, even though you somewhat root against him.

But Rizov would have you believe, “Nope! Same as Little Mermaid!”

her father…insists his people don’t venture past the coral reef. It’s as inevitable as her journey of self-discovery and vindication that, in between musical numbers, Moana will have reason to leave and prove herself.

Eh, more or less. And I see why Rizov is simplifying this in order to avoid an over-explanation. But it’s unfair to boil down Moana’s motivations to self-discovery, when it ignores how the first act effectively explains why she wants to “prove herself.” And it’s compelling, not just inevitable. For one thing, she’s energized by how her ancestors were voyagers, and part of her motivation to leave is to restore her people’s culture, in addition to answering the call to help her people that is set up earlier when she’s learning the ropes in becoming chief.

Rizov goes on to praise the movie a bit for not being as racist as Aladdin, bring up the weird controversy over Maui’s weight for some reason, and gush over how pretty the movie’s water and hair is. Eventually, he brings up the music and points out some of the clever lyrics.

But no matter who wrote the songs, there was always going to be a line about listening to your ‘inner voice’ – it’s pretty much Disney company policy.

I also shudder at the simplistic plot device that is “listening to your heart.” Disney popularized it, to be sure, but what’s so depressingly absurd about Rizov’s assessment here is how he missed the part where Moana blatantly defies this boring cliche.

First, I want to point out that one of my favorite things about Moana is the music, because Lin-Manuel Miranda and the other writers did a fantastic job using each song to lend the story a lot of complexity and depth (seriously). In “How Far I’ll Go,” Moana spends the entire song declaring her situation and moral conflict that will define the film. That what she wants consistently clashes with what is expected of her, while she pontificates the benefits of “playing along” and how that will work out better for everyone but her, only for the “voice inside” to make her question if this is truly what’s best for her people.

The inner voice is recalled throughout the film, but it’s foreshadowed in the first number, when Moana’s grandmother tells her exactly what that inner voice means and why it’s important. She tells Moana that if her inner voice essentially spurs her to action, that means the voice is “Who you are.” Later, in “I Am Moana,” her grandmother again starts to sing this part, but then asks Moana to answer if she knows who she is. This contrasts with the film’s other repeated theme of understanding “where you are” (the name of that first song). Moana answers her grandmother by saying that she’s defined by where she comes from, what she’s doing, and where she’ll go. Not her inner voice. Her inner voice is simply her.

These are complicated ideas that appear formulaic when you just tune out at the mere mention of “the voice inside,” but following the music leads you to a completely different understanding of what the writers were going for. Moana isn’t another a “follow your heart” diatribe, it’s an attempt to better explore what it means to make decisions about what you’ll do with your life based on your circumstances and instincts. It makes the case for balancing these two struggling concepts and carving out your own path by being fair and honest with yourself and the people around you.

All of these affirmational bromides are a regrettable staple of the late Disney corpus, and while they coincide nicely with the recent boom in self-proclaimed ‘empowerment ballads’, they do little to actually raise the spirits.

Translation: I didn’t feel particularly empowered, so there’s no way you did.

for all the technical skill on display, this feels as inessential and disposable as any Shrek or Ice Age, only with ostensibly loftier pretensions.

First of all, only the Shrek sequels (after the second) are disposable. To say that Shrek is inessential is obvious, forgetful nonsense. Second, to compare Moana to Ice Age is so off the mark, I have to believe Rizov did a spit take when he realized that nearly every single critic in the world completely disagrees with him.

Now, I’m not here to tell you that Moana is somehow a lot better than you realize. It’s a personal film for a lot of people, myself included, and I believe it has more than enough merit to be regarded with high praise outside of water and hair effects (which are gorgeous, don’t get me wrong). It’s still my favorite movie of 2016, Oscar or no, and that’s only being strengthened by repeated viewings.

18 thoughts on “Snarcasm: ‘Moana’ Is Formulaic Once You Ignore All Of Its Originality”