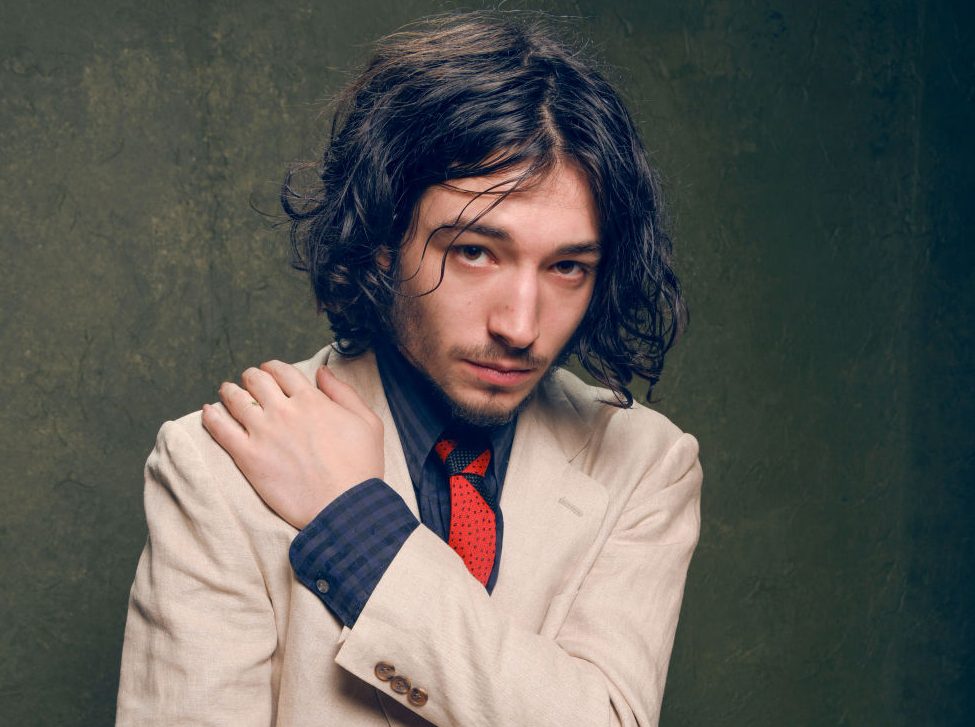 It’s been a while since I revisited this column, so why not kick it off by Snarcasming one of my good friends?

Most of you probably know Adonis Gonzalez, recurring cohost of our Now Conspiring movie podcast since early 2015. He’s also a writer, though, and despite him writing plenty of silly things over the years, this one deserves a Snarcastic response.

Fresh off the news that Ezra Miller will portray a character named Credence Barebone in the upcoming Harry Potter spinoff movie, Fantastic Beasts and Where to Find Them, Adonis ignores the obvious question — does Ezra Miller have to be in every Warner Bros. film? — and instead asks a question too obvious to even think up:

Well wow, Adonis, way to cut Miller down before the movie even comes out. Even if your fan theory ends up being true (because the universe demands that even .00000000001% chance odds are still, by definition, possible), how does that mean he wouldn’t have been “important” otherwise?

So for those of us who think Ezra Miller still gets roles where he’s an important character, this just comes off as a bit hostile. Now, let’s see if Adonis can lend credence to his fan theory about Credence.

Untrue. We actually know a lot about Credence already thanks to a comprehensive preview of the character offered by EW and even Slashfilm, which Adonis credits for the story.

Tell me if this is “shrouded in mystery:”

(From EW) Credence is the adopted middle child of Mary Lou Barebone (Samantha Morton). We’re told that he “appears withdrawn, extremely shy and far more vulnerable than his two sisters. Credence is defenseless against the abuse that comes in response to the slightest infraction of Mary Lou’s strict rules. But his loneliness also makes him susceptible to the manipulation of Percival Graves (Colin Farrell), who has taken a personal interest in Credence.” Graves is a powerful guy, an auror and the Director of Magical Security in the American wizarding government.

I mean, sure, we know that he’s an adopted middle child, and we even know his “mother”‘s name, but do we know if he’s secretly another character entirely without any real evidence to back it up? The internet will see to that!

And believe it or not, Adonis actually points out that what he just said isn’t true.

But there’s nothing mysterious about that description, right?

No, what’s really mysterious is that reports are saying Credence will be a “notable” character in the Harry Potter universe. This seems to hint that we might have seen Credence somewhere before.

First of all, Adonis doesn’t cite a single source for these “reports.” What reports? Who reported this? The word “notable” doesn’t show up in the EW article, which broke the story, or the Slashfilm one, which reported it.

Show us your report certificate, Adonis!

Second of all, a character being “notable” does not mean the character is familiar to us viewers. A notable person within the Harry Potter universe simply has to be famous among the characters. It could also mean (because the word has disparate meanings) that Credence is simply an important character we should pay attention to.

Either way, there’s nothing here to plainly imply that Credence Barebone is somehow a character we’re directly aware of already.

For all we know, Credence could be anybody.

He could be in this VERY room!

Also, don’t forget that he could be…Credence Barebone.

Ezra Miller has been sworn to secrecy about his character, making the true identity and purpose of his character even more intriguing.

Wait, wait, wait. A movie studio doesn’t want an actor sharing too much information about the movie? How could this have happened under our watch?

And so it begins.

Specifically, Adonis is talking about the father of Lord Voldemort, not Voldemort himself. That would be Tom Riddle Sr. He goes on to remind tons of readers who Tom Riddle is, even though the only people who would deeply question this theory are book readers who are starting to get a crick in their neck from shaking their head so frequently.

Yeah, that’s awfully convenient for your theory, isn’t it? “I can’t be wrong if you don’t know anything about what I’m talking about!”

We don’t know where he comes from, or what his purpose is in the film.

Right! We only know that he comes from America and is affiliated with Colin Farrell’s character! What are we supposed to even do with that information?

Fantastic Beasts is set in 1926 and, given the appearance of Barebone and the age of the actor portraying him, it’s safe to assume he’s in his early 20s at the start of the film. Tom Riddle, Sr. was born in 1905, meaning he’d be 21 years old in 1926, so the ages match up pretty accurately.

True, so now we’re just left wondering whether or not Ezra Miller can pull off a British accent.

Once again, Adonis goes on to disprove his own theory with a single sentence.

…age doesn’t explain how or why Tom Riddle, Sr. would be in North America with an entirely different name.

Are…are you reading my mind?

Poor Voldy could never catch a break, even in his younger years. His mother died giving birth to him, and his deadbeat father abandoned him before he was even born. But why did Tom Riddle, Sr. walk out on his family?

Well, the only reason he married Merope Gaunt in the first place was because of the love potions she used on him. Tom Riddle, Sr. immediately ran off after seeing that he not only had a wife he didn’t love, but a son he didn’t want on the way.

To be fair, what would you do if a witch tricked you into impregnating her?

Tom retreated to his parents’ house in Little Hangleton, England. But what if that’s not exactly the case?

Then all logic and reasoning have ceased to exist.

Who’s to say he went straight to Little Hangleton and stayed there?

No one! Not even his family, legacy, property, money, friends, and power!

Let’s look at why Tom ran away from Merope. It wasn’t just because she tricked him into loving her, he was also disgusted and frightened at the fact that she was a witch.

Which he never told anyone, because he was too much of a muggle to let others think he was insane. According to the book, he told his family Merope “tricked” him. Also, it’s never implied that he was actually scared of her. In fact, he’s probably too aware of her devotion to him to believe that she’d want to cause him any harm.

Remember, Tom Riddle, Sr. was a Muggle, so the practice of witchcraft was likely taboo to him.

What if Tom traveled to America in an attempt to hide from Merope, afraid that she might one day use her powers to track him down.

Why? It’s never hinted that he feared her. The Gaunts were in Azkaban by the time this was happening, and they’d been tormenting the town for years and no one ever took them seriously. If anything, he’d probably welcome the chance to deal with her outright if she dared return to Little Hangleton. He has no idea that Merope is dangerous, and the pride of his name is likely too important for him to abandon it by leaving his home. This idea just doesn’t fit the character.

Also, if she can use her powers to track him down, like you say, then how does escaping to America fix that?

Going back to the town he met her in would be the easiest way to get caught, but a trip overseas and a quick name change would keep him hidden for a while!

Which would be the biggest tease of all, considering Merope’s untimely death months after this supposedly happened.

And as you probably didn’t want to expect, Adonis yet again asks a question that debunks his own theory, only so he can answer it in a way that doesn’t really fix the problems he’s pointing out himself.

If Credence has an adoptive mother, how could he possibly hail from the same pureblood family as Voldemort himself?

Oh, now we can just say things and they become true? OK! The sky isn’t made of gases…it’s made of STARBURSTS. See, I wrote it in all caps so you’d know how serious I am about wanting it to be true.

What annoys me (the most) about this is that you don’t even position in an honest way. Mary Lou Barebone could actually be Mary Riddle (you know, if JK Rowling actually approved such a pointless and cheap plot twist). Just saying she is Mary Riddle and putting actually before the conclusion doesn’t make it so.

If you’ve already made up your mind, then this isn’t even a fan theory, really. It’s just a loud accusation.

Maybe he didn’t venture to America to escape Merope’s possible wrath alone. Maybe he was joined by his mother, Mary. Mary, whose son had apparently been enslaved by a witch and forced to love her, probably doesn’t have much love of her own for magic users.

See, the problem is that none of this makes sense. What indication from the text do we get that Mary Riddle isn’t keen on staying in Little Hangleton? What informs your guess that she’d want to follow her son to America and pretend to be his adopted mother? This just creates more questions upon questions, and I seriously doubt a movie that’s not even about Voldemort and his family would have the means to tackle such a left field twist.

Seriously, imagine if this “twist” actually happened in Fantastic Beasts. The movie would have to spend so much time positioning it in a way that makes sense that it would utterly distract from the plot we’re supposed to be involved in. It would have to explain all of these problems and inconsistencies, hoping that you don’t remember enough about Tom Riddle’s backstory to question it.

So what does she do when she and her son reach America? She becomes the leader of the New Salem Philanthropic Society, the organization that hates witches and wizards.

So let me get this straight. Within months (at best) of arriving in America, a female immigrant is going to show up in 1926 America with an adopted son and a bunch of random daughters, then become the leader of a secret society she shouldn’t even know about?

After all, it was a witch who took her son away from her, so now she’s got a bone to pick with the magical community.

In America?? If she was that bloodthirsty toward witches, she’d seek out Merope and the Gaunts herself, not run away to America and invoke witch trials unrelated to her own history. She had wealth and power in England, but she gave it all up to hang out with her 20-something kid who she now has to apparently say is adopted because whatever? Also, he has sisters with him for some reason and is now shy, even though that’s not his character?

She and her son live in the USA for years, until they believe it’s safe to go back home.

“Let’s wage war on witches, then go back home when it’s safe!”

So there you have it, my theory for who Credence Barebone really is! He could just be a normal guy, or he could be poor Muggle Tom Riddle, Sr., desperately trying to escape his unwanted family! What do you think?

I think you need a nap and a coloring book, Adonis.