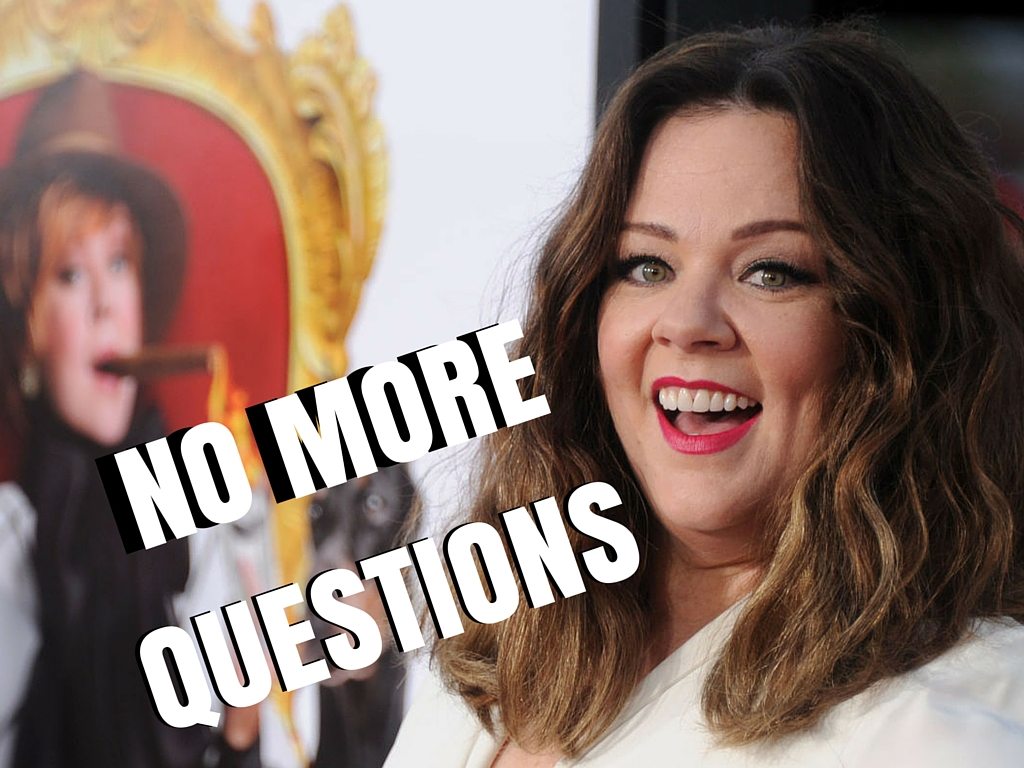 When I say I’ve been waiting all my life to sit down with Melissa McCarthy from this weekend’s wide release, The Boss, I really mean to say that I’ve been waiting since I reread the film slate to make sure there wasn’t anyone else on the list.

Two screened phone calls from Jake Gyllenhaal later, I managed to get some face time with the face of McCarthyism, which her publicist keeps emailing me not to say for some reason. Thanks to my spam folder, however, we have a No More Questions made for the fans.

JN: Hi Melissa. Thanks for doing this interview today.

JN: Are you racist?

JN: You said it perfectly. That’s why I’m suspicious.

JN: Do you think you’re better than me, just because you’ve won an Emmy?

JN: Wow. Real humble. You put the ME in Melissa, for sure.

MC: If you don’t shut your Puerto Rican mouth, I’ll do it for you.

JN: (leans backward, looking slightly attracted all of a sudden) Melissa, no one can deny that it’s hilarious watching you talk and move. Does that relate to the scenes in which you dance in The Boss?

MC: That’s one dream off my bucket list. I love to dance. I love it. Going to dance rehearsals for two weeks was the coolest.

JN: Uh, you’re a Hollywood star, Melissa. You were the third highest-paid actress of 2015. You, uh, could’ve taken dance classes anytime you want.

MC: Third highest? Oh, so I made minimum wage?

(we both laugh and high five)

JN: Real talk. Your new movie doesn’t make any sense and looks idiotic. So why did you make it?

MC: Well, sometime after Identity Thief, I came to the conclusion that I can totally make a ton of money by being in terrible movies. Way more than good ones, you know?

MC: I’m not allowed to say, but we are talking about a movie that centers around girl scouts being guided by a weird cross-section of Nancy Grace and Oprah. Actually, saying it out loud makes me think this movie is genius.

JN: Right, I’m onboard now, actually. I’ve heard rumors from inside my head that you and Kristen Bell are mortal enemies.

JN: Is it the sloths thing?

MC: Look, they’re dopey animals, and easily the most overhyped aspect of Zootopia.

JN: Does this affect your stance as a furry?

MC: God, no. I ship Nick and Judy up and down the street. Here’s a fan theory for you: Zootopia takes place in the same universe as Nick and Norah’s Infinite Playlist.

MC: And that obviously means these movies share a timeline with Scott Pilgrim vs. the World and How to Deal.

MC: Which brings me back to my main point. Kristen Bell can go sloth herself.

JN: Melissa, a lot of people claim you don’t really have talent. Can you speak to that?

MC: OK, well, who does? I’m trying my best over here while Shia LaBeouf is literally making YouTube videos.

MC: Well, that was part of my contract in Ghostbusters, but I’ve been spending most of my Internet points on Jimmy Fallon sketches ever since they cast Leslie Jones.

JN: Were you a fan of Batman v Superman?

MC: Why? What have you heard…

JN: This is a safe place, Melissa. No one really reads this website (sneakily covers up subscription count in the sidebar)…

MC: OK, look, I liked it. I actually loved it. It’s the best superhero movie of all time!

KB: I knew it. I slothing knew it.

MC: Is that a studio audience?

JN: (turns off studio audience app on phone) Kristen, thanks for arriving on such short notice.

KB: You texted me that the Veronica Mars remake was shooting here, but this is just a weird website with Pixar characters all over it.

JN: I brought you here, Kristen, so you and Melissa can hash this thing out. I tapped your phone lines two weeks ago, so I know all too well how Batman v Superman has been ripping your friendship apart.

MC: Not my fault. She’s the one who called me a fanboy.

JN: Is this true, Kristen? Did you call her that?

KB: Fine, I did. And I’d do it again if she brought up Dark Knight Returns one more slothing time—

MC: Batman DOES kill in that comic, Kristen! And in like every movie besides the one with Batnipples!

MC: Oh, I’m about to bust this blonde ghost (gets out of chair with fists clenched).

KB: WHO YOU GONNA CALL? SUPERMAN? HE DOESN’T EVEN RESCUE PEOPLE.

MC: HE RESCUES THE CHICK ON THE ROOFTOP, SARAH MARSHALL.

JN: Well, that’s all the time we have this week (ducks to avoid flying chair). Thanks for joining us for No More Questions. We’ll see you next week—(gets body slammed by Dax Shepard).

2 thoughts on “No More Questions: Melissa McCarthy from ‘The Boss’”