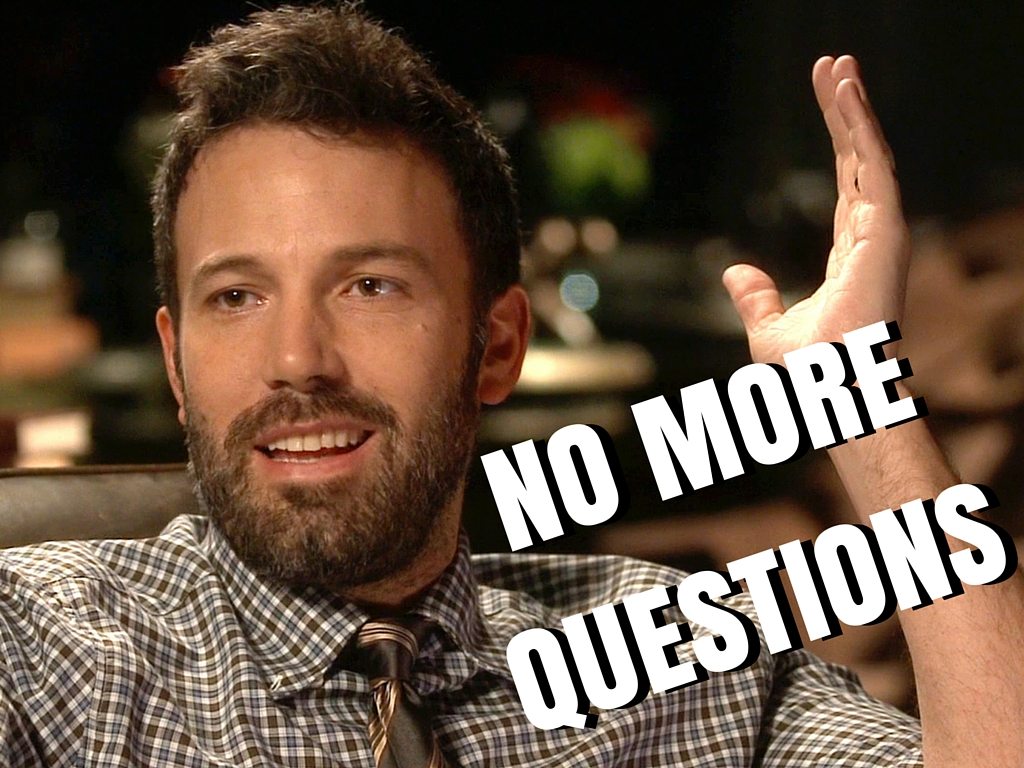 Tracking down Ben Affleck was the easy part. Getting him to sit still for at least 30 seconds was a challenge, for reasons that pertain to some subject matter I purposefully avoided mentioning. OK, his divorce.

Being unfaithful to Jennifer Garner aside, Affleck was gracious enough to believe that I really am a professional reporter for Jetset Online Network (or JON for short), and we had a remarkable conversation about life, family, fortune, and other topics that overtly sidestep his involvement in Daredevil.

JN: What would you say is your biggest missed opportunity? Aside from not being the official sponsor of Aflac.

BA: (shoots me a puzzled look) You know, it’s crazy what kind of stuff I’ve turned down. Some of it good, some of it bad.

JN: The Internet thinks most of it is bad. And that you’re bad as a person. Can you speak to that?

BA: Haters gonna hate, I guess. Maybe those Internets you mentioned should go to Blockbuster and rent Argo (laughs unironically).

JN: You…you know what the Internet is, right? And that Blockbuster has been out of business for years because of…the Internet…

BA: What? Oh, yeah. Sure. The Internet is such an important thing, you know (looks around the room, dazed).

JN: So then, you’ve never seen this (hands Ben a picture of him and Matt Damon as Batman and Robin).

BA: Where did you get this.

JN: The Internet, Ben. It’s been making fun of you for years. Here’s a GIF of you two running (shows Ben the GIF).

JN: You have a history of dating your costars, Benjamin. After shooting Batman v Superman, would you say you’re closer to a relationship with Henry Cavill or Jesse Eisenberg?

BA: Amy Adams, for sure. Actually, forget I said that. This isn’t on record, right?

JN: Is this because you and Henry look so alike?

BA: (thinks intensely) Actually, that’s not so bad. It’s like looking into an even more attractive mirror.

JN: So you have no problem with the main characters of this big budget superhero movie being two white guys with dark hair?

BA: You never asked that.

JN: Don’t avoid the question like it’s a call from Aflac.

BA: (leans in) Don’t tell me what to do. My lawyers got me a story credit on Good Will Hunting, pal.

JN: Most people hate the idea of you playing Batman. Do you think this is personal, or because they just hate you?

BA: With Batman, you have to be identifiable. For me, hooking into this character had more to do with…he’s a human being. He’s an easier entree.

JN: So people will eat him up?

JN: I didn’t want to bring this up, but now I’m hungry. Do you blame yourself for Daredevil?

BA: Daredevil didn’t work at all, man. It was made before people figured out that you could make these movies and make them well.

JN: How would you make Daredevil now?

BA: Easy. I’d cast Charlie Cox and deliver the whole thing on like maybe a service that sends you DVDs in the mail. Have it tie in to the Marvel Cinematic Universe. All that jazz.

JN: Who are you rooting for in this fight? Batman or Superman?

BA: Uh, that’s a stupid question for a lot of reasons.

JN: I know. Just wanted to make sure you were still paying attention. Alright (clears throat), how positive are you that this new Batman is even close to transcending the performance of George Clooney?

BA: I’m not sure who that is, but let me just say that there is something about Batman as both a superhero and a normal man with vulnerabilities and weaknesses like we all have that makes his appeal kind of enduring, because he is not just super, he is also like us.

JN: Ben, we have a surprise guest waiting just outside the door thanks to my clever idea to leave a sandwich right by the doorknob. He should be finished by now, so come on in, Henry Cavill!

BA: I thought this was just you and me?

JN: Easy, Ben. Leave the duking it out for the major motion picture (laughs slightly). Henry, tell me something personal about Ben he made you promise not to tell anyone.

HC: (nods casually) No problem. His favorite episode of Hart of Dixie is actually—

JN: You have an accent?

HC: Since when? Ben, we shot the film together for months. You held my baby girl in your arms.

BA: Uh, you don’t have any kids, Henry. You’re not even engaged anymore.

JN: Guys, we can talk about our personal lives once The View finally buys me out. For now, let’s talk about the movie. What was that episode of Hart of Dixie?

HC: (chuckles) Why, would it tear you apart? Like your nanny?

HC: We’re like brothers! Everyone on set called us Hen Affleck and Benry Cavill.

BA: That never happened once.

JN: Did…did your “fiancé” call you that, Henry?

BA: Is she in the room right now, H-Bomb?

JN: Well, that’s all the time we have today for No More Questions. Guys, thanks for getting to the real talk and letting people know why they should watch Batman v Superman.

HC: (choking through the tears) I really like the name of your magazine.