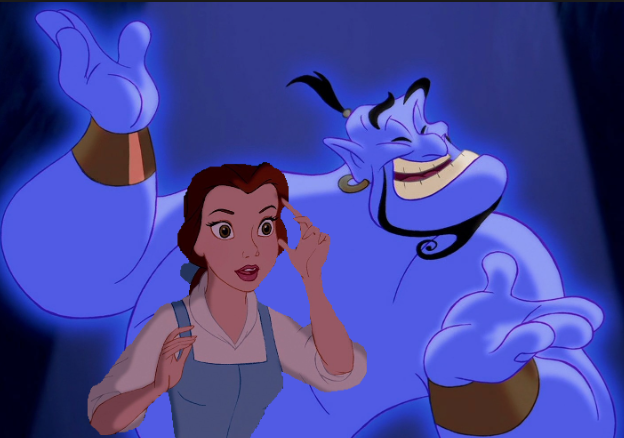 But this entry is different in that it highlights a unique trend in fan theories I haven’t harped on yet: the dreaded repost.

What is a repost, you ask (all six of you?) Well, a repost is when you resurrect content that was already incredibly popular at one point. Like a funny image, hilarious video, or fan theory that Aladdin exists in the same universe as Beauty and the Beast.

“But Jon!” you ask, “You repost theories all the time. Is this Snarcasm secretly about you?”

Well, here’s the difference between what I’ve done in the past and what constitutes as a “repost.” See, if you’re going to resurrect content and then pretend it’s new, you should at least add something to it. Build on it. Do something. But half the time, these reposts are just retreads that make The Force Awakens look like Tree of Life. 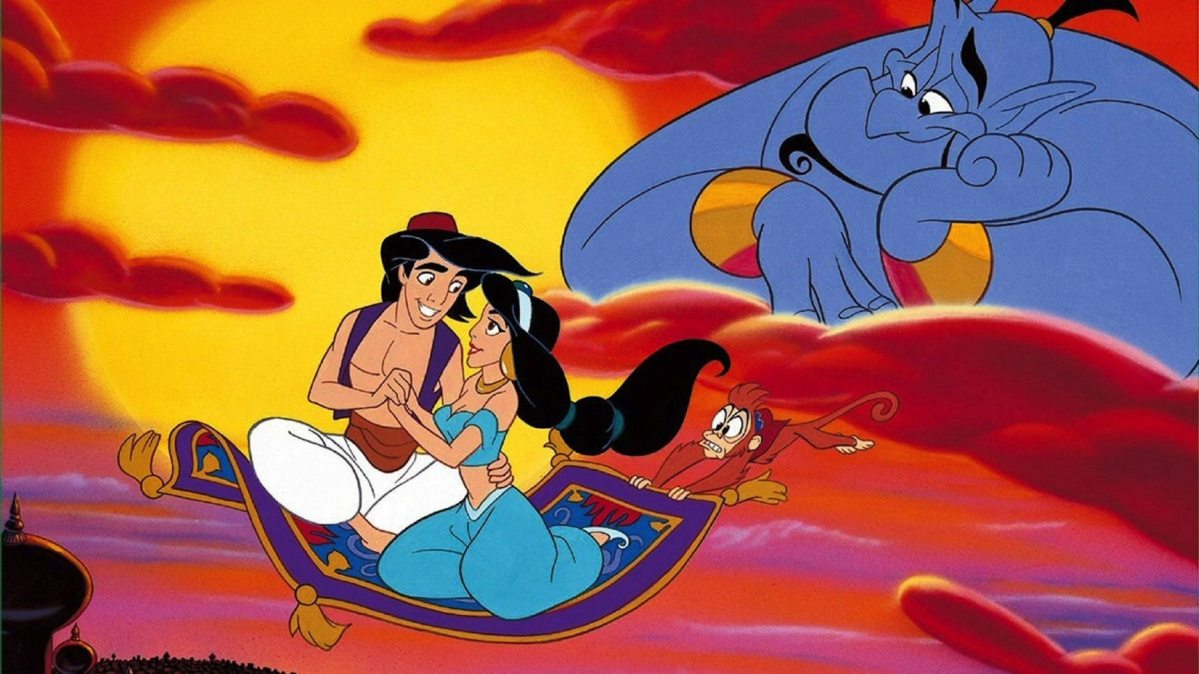 Who is the perpetrator of the repost in question? That would be Julia Hays from E! Online, who essentially runs their “we can do Buzzfeed, too” desk. She unearths everything from The Best Oprah Winfrey Gifs of All Time to Does Watching High School Musical for the First Time Alter Your Attraction to Zac Efron?

Both of those are actual, real-life articles.

“Julia, it’s the editor. We need you to find a way to make this headline twice as derivative as the most derivative headline ever seen on the Internet.”

Now, some of you may have never heard about this Beauty and the Beast/Aladdin theory, which is why this article exists. But at the same time, it should at least be mentioned that this theory has existed for years, yet E! is portraying this as some sort of turning point in history.

| Prepare to have your world come crashing down,

Your headline already got me there.

| there is a Disney theory that’s sure to upend everything you thought you knew.

So, everything I thought I knew…Culture. History. Politics. The meaning of love. Why “Be like Bill” was popular for three days.

| There is nothing the Internet loves more than finding crazy theories about the movies we love.

Hays links to a separate E! article that dives into “13 Crazy Theories About…” eh, it’s really long. Half of the theories boil down to “they were dead at the end” or that Jack from Titanic is a time traveler because you deserve that.

| No matter how many times we re-watch Disney and Pixar classics, there will always be Tumblr accounts digging into the cameos and references we may have missed.

Why hire journalists when Tumblr does all the work for you?

Also, here’s something wildly entertaining I discovered while writing this Snarcasm. So above, “Pixar classics” links to another E! article that doesn’t have anything to do with Pixar classics, as it refers to that fan theory about how Tangled, Frozen, and Little Mermaid are connected for some reason no one understands.

But that’s not all.

In that article, they criticize my fan theory about Andy’s mom from Toy Story 2 being Jessie’s original owner. Quote: Fan theories are a dime a dozen on the Internet. Most we don’t care about (oh, Jessie from Toy Story may have been Andy’s mom’s toy? OK?),

That links to an EW.com article that references me personally.

Yes, this is real. E! Online thinks my fan theory is garbage. The same E! Online that thinks Sandy drowns in the beginning of Grease, Sid being the garbage man in Toy Story 3 is “subtle,” and Peter Pan is the angel of death (all in that “13 fan theories” article I referenced earlier). Because yes, you deserve that.

So here’s all I have to say to E! Online about that: neat.

| This Tumblr theory (which was brought to our attention via Someecards),

I couldn’t make this up if I tried.

| …points to a connection between Beauty and the Beast (1991) and Aladdin (1992) that most fans probably never noticed.

Is that why people have been pointing this out since 1993? This was debated even before the Internet was widely available.

| It’s in a seemingly innocuous scene in Beauty and the Beast when Belle visits a local bookstore to return a book she borrowed. Is this just a scene to show the viewer that Belle’s an intellectual? No, there is so much more.

Yeah, yeah, that’s cute and all, but is that really the point of the scene? Last I checked, we knew she was a reader at this point. That scene merely showed that she was yearning for something more through her books, and that she’s kind enough to warrant a special gesture from the owner who lets her keep the book.

Next, Hays actually just sticks the entire Tumblr post in the article. She doesn’t even set it up. It just appears out of nowhe- 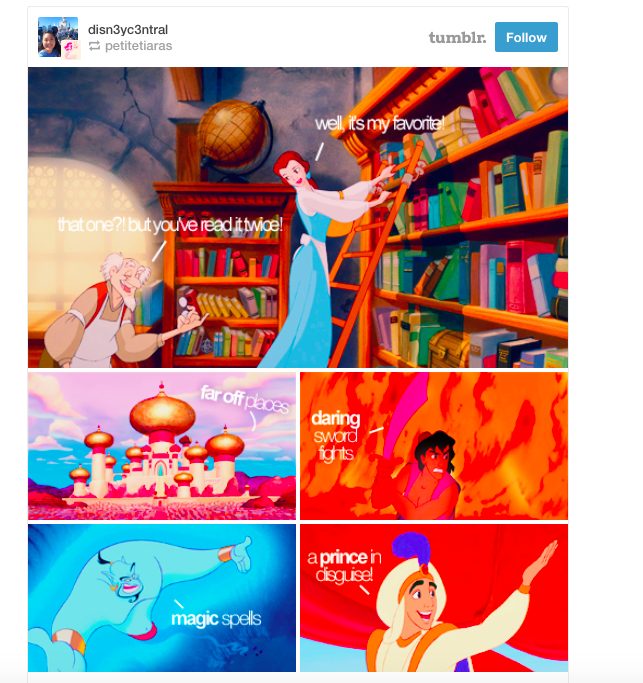 Alright. A few things we need to discuss.

I’ve been asked about this theory around a dozen times, so I’ve looked into it plenty. And honestly, I don’t find it all that convincing. The gist here is that Beauty and the Beast is narratively hinting at Aladdin, a movie that came out a year later.

This makes some sense, as Disney is known to put little nods in here and there in its movies. And in a way, it’s cute to think that Aladdin is a book that Belle loves to read.

The problem? The plot points Belle references don’t really align with Aladdin when you actually give it some thought.

Daring sword fights? There really aren’t many at all. It’s mostly Aladdin running away all the time. Magic spells? The genie grants wishes, not “magic spells.” And that’s such a generic line, you can apply it to nearly any other Disney movie that has magic in it. Finally, Aladdin isn’t a prince in disguise, because he’s not a prince. He’s in disguise as a prince, and there’s a clear difference.

For that reason, I think this theory holds enough merit for debate, but it’s mostly weak.

Ah, I forgot that one. But still, what Disney movie doesn’t occur in a far off place?

| Daring sword fights? Heck, even Abu the Monkey wields a sword at one point.

True, but Abu doesn’t even use it. It’s not a fight because the guards take out their swords and Abu runs off. How is that even daring?

And then Hays turned into a bell for some reason?

| And a prince in disguise? Prince Ali has an entire musical number, baby girl.

Semantics, baby girl. He’s a street rat in disguise. And it makes more sense that Belle is referencing a fairy tale land, like the ones where princes disguise themselves as common folk in order to save the damsel in distress. But I understand if you’re unfamiliar with information that is read in books.

| We don’t discover Prince Ali’s true identity until the third act of the film Aladdin.

What? We know who Aladdin is the entire time. I’m guessing she’s referring to Jasmine, perhaps? Even then, that occurs halfway through the film, not in the final act. But it’s complicated because there are two reveals: one where she discovers he’s the street rat from before, and then the reveal that he’s not a real prince.

Even then, here’s what Belle actually says: “Here’s where she meets prince charming. But she won’t discover that it’s him until chapter three.”

I get where Tumblr is coming from, but there are a lot of problems here. Aladdin is not prince charming. He’s not even a prince. And Belle is saying she won’t discover he’s a real prince until chapter three, but that’s the exact opposite of what happens in Aladdin.

See, the book is more widely accepted to be a form of foreshadowing. Belle doesn’t know the Beast is actually prince charming (she references this same line in the song, Something There). She’s taken to a far off place, there’s a magic spell, etc.

| Granted, the book itself that Belle is reading shows artwork that could also represent other Disney films with similar plots.

That’s one way to put it. The other way to put it is: Oh, well the book shows an entirely unrelated story going on that bears no resemblance to Aladdin whatsoever.

That’s a castle. And a forest. And a white guy. And a white girl in a blue dress. You know, all the things that aren’t in Aladdin.

| Beauty and the Beast and Sleeping Beauty feature similar elements.

And here’s where my migraine kicks in.

| Beauty and the Beast has a distant castle in the woods, Gaston fighting the beast with a sword, a magical rose and a castle under a spell, and Belle doesn’t know the prince thing about Beast until later in the film. So, perhaps some foreshadowing?

Yup. Hays is altering this “mind blowing” theory that is supposed to upend your take on the Disney universe with the convention that pretty much everyone already knows about. “Mind blown” alright.

And at the same time, she’s pointing out that Sleeping Beauty has visual elements similar to standard fairy tales. You had to read E! to figure that out.

| Sleeping Beauty, as well, deals with far off places and magical spells.

There are no daring sword fights or princes in disguise, but don’t let logic get in the way of a waste of your time.

There are so many things wrong with this sentence, my migraine just fused with the Tylenol I just took, and they are now working together to pass me out slowly for my own good.

Aurora not knowing who Prince Phillip is doesn’t mean he’s in disguise. This is simple reading comprehension, people. And let’s just disregard that the word hella made its way to an article—actually, no that makes sense considering where we are right now.

| Plus, Phillip battles the evil Maleficent with a sword.

That’s not…no, that’s not a sword fight, Hays. A sword fight is when two people with swords fight each other. Why is this happening?

| Our hearts still trust the Tumblr investigation behind Aladdin, but like a Netflix documentary, we’re trying to give you all the facts.

All the facts? These were facts you were writing about? Because so far, you’ve posted a few Tumblr gifs and arguments that boil down to, this is similar to this. See?!

Fine. Let’s see what the trusted E! community had to say about this “theory.”

Whew, not off to a great start.

12 thoughts on “Snarcasm: Aladdin and Beauty and the Beast and the Migraine”