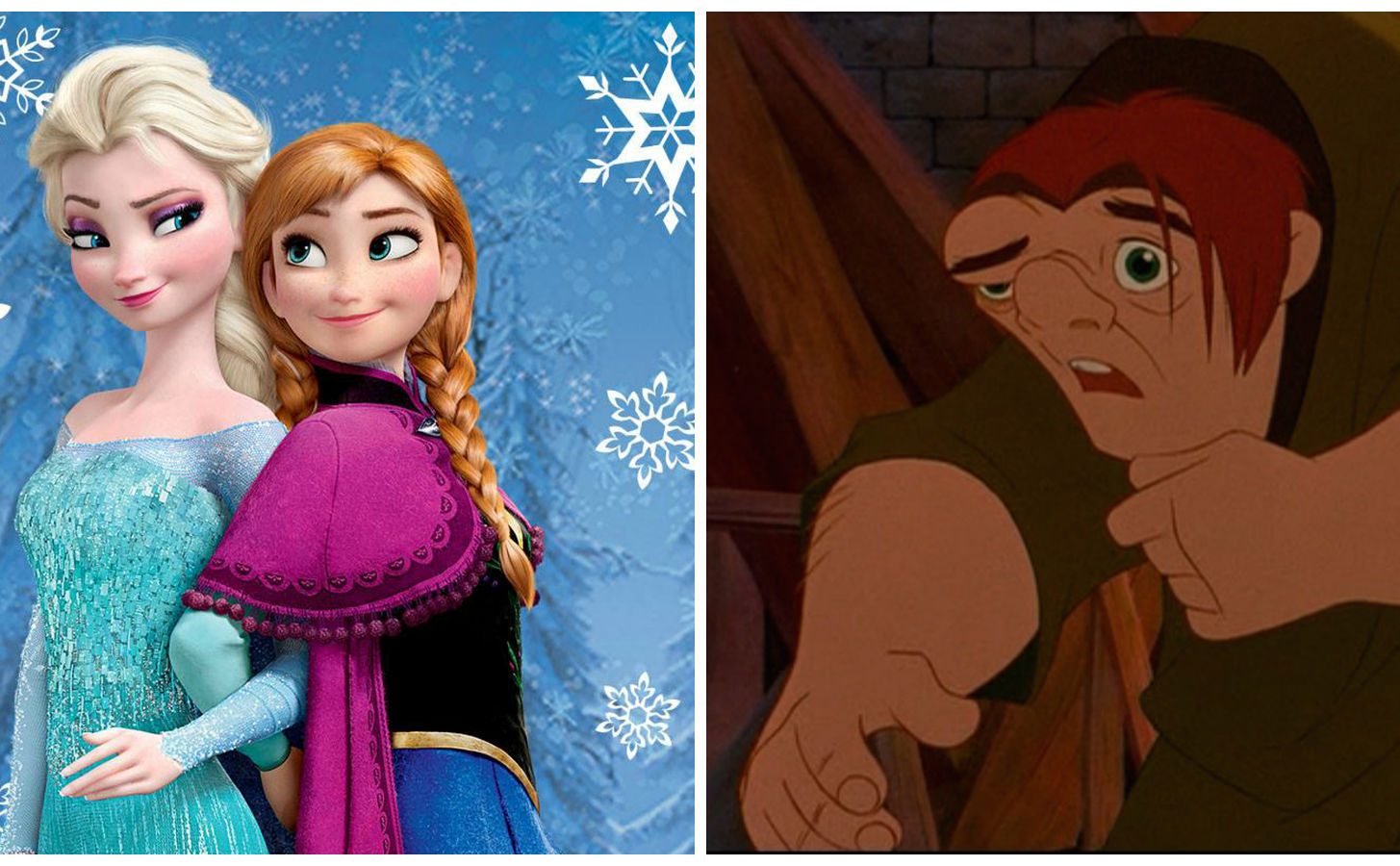 I’m very aware of the fact that my Snarcasm column has devolved into a weekly hatefest geared toward bad fan theories (or evolved depending on your tastes). But for obvious reasons, these “fan theories” are the articles you all have been sending to my inbox lately, so that’s what you’re going to get.

This week, I read a fan theory so asinine, so vitriolic in its apparent disdain for filmmaking in general, I had to pause and have an existential conversation with myself concerning whether or not I happen to be one of the reasons fan theories like these gain so much traction online.

I changed my mind on this because it also happens that GREAT fan theories with tons of great analysis are also gaining traction among countless readers, even if it’s at a smaller scale.

Could Anna and Elsa be Quasimodo’s Ancestors? This Frozen Fan Theory Seems to Think So

In other news, “Fan Theories” have become sentient beings with the ability to think and comment on distant, totally unrelated family trees.

The rest of us just click away and pray to the Internet gods that our indifference will be rewarded decades from now.

and this Frozen/Hunchback of Notre Dame ancestor theory has been so well thought out that I just had to write about it.

Well thought out? Oh, we’ll see about that.

Not this again. Aren’t we done regurgitating every thought that originates on Reddit, Tumblr, and 4Chan?

has theorized that Quasimo could be Anna and Elsa’s ancestors thanks to a certain magical connection, and while there are definitely holes in the theory (that the author has acknowledged), it’s fun to think about the elements that tie tie the Disney universe together could apply to such wildly different movies.

Why? Why is it “fun” tying these movies together? I’m not saying that it isn’t fun, but it’s getting tiresome reading all of these connections that are made for virtually no reason.

Speaking as someone who loves to come up with fan theories, the best ones are based on a purpose. They have a reason to be brought into the discussion. Fan theories like “He’s related to her somehow” do nothing of the sort except to highlight how lazy storytelling would be if they all just boiled down to “Luke, I am your father.”

As we can see from his abilities to bring the Gargoyles to life, Quasimodo has been blessed with some sort of stone magic. Chiquen theorizes that Quasi was using gypsy magic (maybe unconsciously) right under Frollos nose.

Stone magic? When in Hunchback do we ever see Quasimodo “bringing” anything to life? The answer is never. The origin of the gargoyles is never explained, except that we’re led to believe they’ve always been at the top of the cathedral. The only “abilities” Quasimodo seems to possess is abnormal strength.

You can try to argue otherwise, but the fact is that the movie provides zero evidence that Quasimodo has any magical ability, or that he’s the creator of the gargoyles. A more plausible (and popular) theory is that the gargoyles were originally meant to be hallucinations, until Disney decided that was too depressing and let them interact with the real world.

Also, since when do gypsies have any sort of elemental magic? They’re known for being fortune tellers and seers of luck with slight of hand. Suggesting otherwise has no basis outside of “I want this to happen because it fits in my head.”

At the end of Disney’s Hunchback of Notre Dame, Quasimodo was no longer cooped up in the church and denied his liberty because he was a ‘freak.’

This means he would have had the freedom to travel, and his curious nature about the outside world suggests he would want to see as much as possible…Maybe even Arendelle!

Yeah! And Pride Rock! And Agrabah! And the fake TV show in Bolt! And 3000 years into the future where the dinosaur does the collapses

Although taken enough by Arendelle’s beauty to call it home, Chiquen theorizes that Quasi begins to miss his gargoyle friends so he simply creates some new ones in the form of Arendelle’s bizarre, unexplained troll population.

Except the trolls look nothing like the gargoyles. They don’t even follow the same fake laws of physics.

The gargoyles could float and shoot rocks out of their mouths. That’s it. The trolls in Frozen rolled around and had magical abilities (they were even able to remove curses). There’s no comparison beyond “they’re both made of stone,” which is a weird observation, not an argument.

Chiquen believes that one of Quasimodo’s ancestors may have married into the Arendelle royal family which could explain how Else got her magic (although it has evolved over 400 years, possibly reacting to the environment) and Anna got her redheaded gene.

There are so many things wrong with this, I don’t even know where to begin.

Just to start, the headline says that Anna and Elsa are his ancestors, but now you’re saying they’re his descendants? This makes me think someone changed their mind on this halfway through, which doesn’t bode well for any of us.

But the biggest problem is that stone magic is not the same as ice magic (which I can’t believe is a sentence I just had to type). If genetics are somehow involved, how do magical powers change person to person, especially since you have to posit (again) that Quasimodo must have (apparently) married someone with ice powers. Then that person would have to pass that gene down over the course of 400 years and…science?

I’m not saying Disney likes to keep its science on the up and up. But even by their standards, these rules pertaining to magic aren’t just implausible, they’re completely removed from the limits of imagination possessed by the fine folks at Disney, and that’s saying quite a lot.

The argument of, “Well, it’s reacting to the change of environment” is also pointless to argue. What, there are no stones in Arendelle?

Next, you have to suspend all disbelief that somehow, someway, a distant foreigner moved to Norway and managed to marry his way into royalty immediately. Oh, and he’s a magic-possessing disabled man with abnormal strength. Oh, and the Hunchback sequel never happened.

Remember, this is Frozen. The movie where the entire kingdom called for the death of Elsa as soon as they found out she had ice powers. Apparently 400 years prior, they were more progressive.

While Elsa’s magic might be based on ice, she also has the ability to bring forth sensitive, friendly companions, just like Quasimodo although some might argue that this is a common Disney storytelling device.

Because I could just as easily argue that Aladdin gave his carpet sentient powers right under our noses because that’s just as plausible as this theory.

Another piece of tenuous evidence

Tenuous? So it’s very weak? If that’s the case, WHY ARE YOU EVEN MENTIONING IT?

comes in the castle featuring a large portrait of Joan of Arc which could indicate their desire to preserve their French roots.

Hang in there, Jon.

Of course, like most fan theories, this one is pretty tenuous and based on the authors own, personal interpretations of things and there are plenty of arguments that this is all coincidence which I will cover below.

“I just wrote about it anyway because I knew you’d read it. Now keep reading.”

Rayner goes on to parrot Chiquen’s own meandering around the subject, which boils down to explaining the stone magic/ice magic problem by claiming it’s just magic and the person “uses magic like a chisel in order to express themselves.”

Which, of course, is exactly what we saw in Frozen when Elsa couldn’t control her chisel, so her paintbrush got everywhere. Hey, both characters were in isolation most of their lives, yet Quasi is the one who apparently was able to control it so well not even the audience or the characters in the movie noticed it.

But Elsa can’t control it because…oh, we don’t want to go down that trail of thought.

Although it’s not the most convincing theory in the world, I love the creative thinking that has gone into this one and, at the end of the day, it’s Disney.

I love creative thinking too, but not when it’s aimless and provides no insight or analysis to justify its existence beyond the simplistic It’s Disney. Unless a theory is convincing enough to overcome this, there’s no point in sharing something that will make people feel like they wasted a ton of their time.

Because what is so interesting about characters being related? Especially when you have to grasp at so many straws to make it happen? It’s fun to guess at relation within a movie, or even two movies that share cameos. In that case, you don’t have to stretch much and it can provide some interesting discussion.

But crossing movies to suggest that every little character is somehow related to another character for no narrative reason comes off as a cry for attention, like you want to be the next person to posit the Jar Jar Sith theory or something similar.

To put it simply, there should be a threshold for which fan theories deserve thousands of words devoted to them on a popular platform. On Reddit, this is no big deal because you can go to a forum specifically designed to chat about theories and decide which ones make sense.

You know what is Disney? Carefully thought out stories that make you feel good after experiencing them. Let’s stick to that train of thought over obsessing which Disney characters have a 0.001% chance of being sort of related.

10 thoughts on “Snarcasm: Everyone in Disney Movies Is Related Because I Said So”