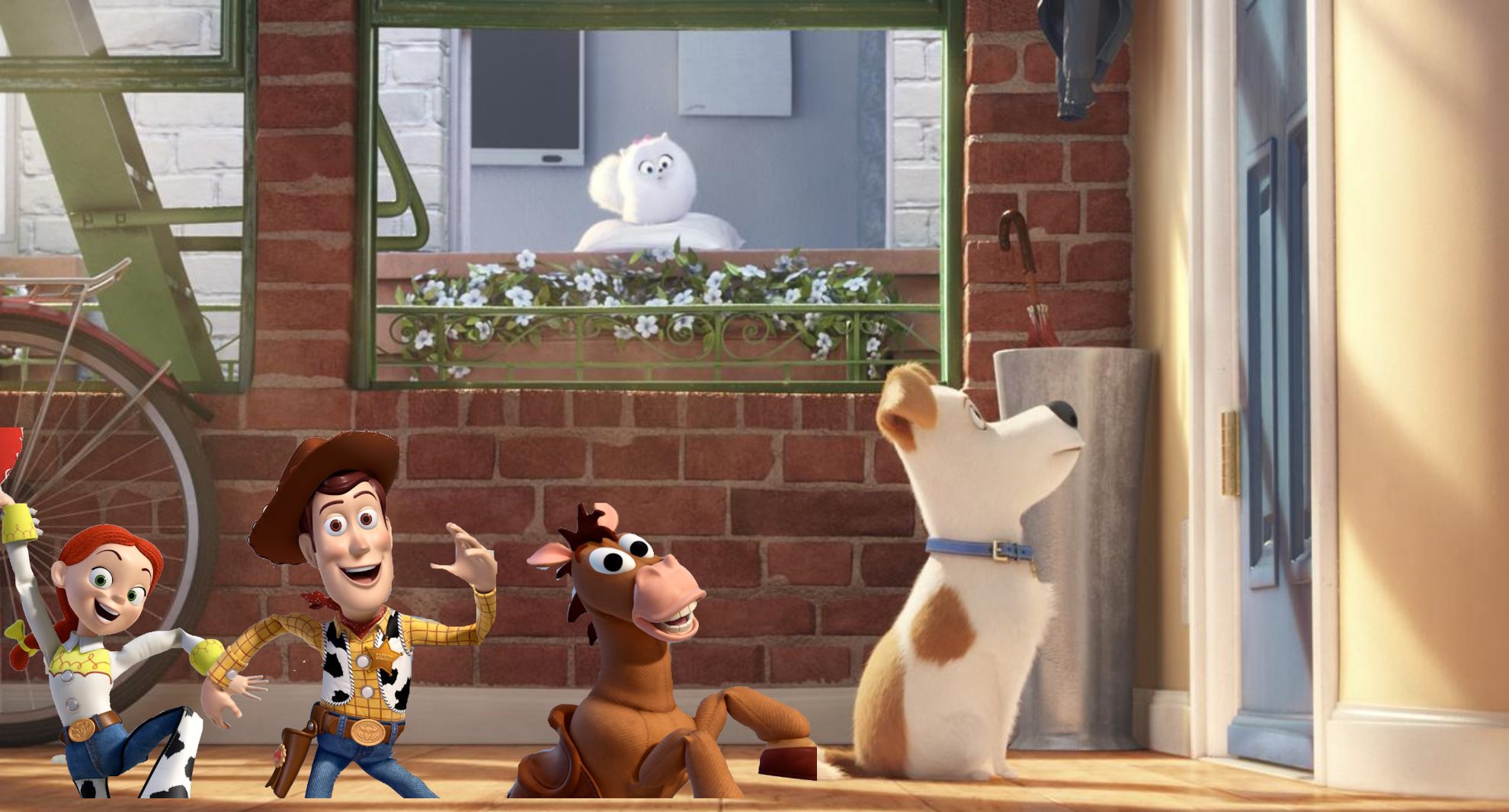 You’ve probably seen a teaser or two for Illumination Entertainment’s upcoming franchise starter, The Secret Life of Pets. The movie is essentially about what dogs, cats, and other pets are up to when their owners aren’t around.

Look, I didn’t dare make this comparison last summer when the first teaser released. That version of the movie was intriguing, as it featured a variety of animals getting caught up in humorous situations in different environments somewhat connected by an apartment building.

Then the trailer dropped, revealing the actual plot of Pets. And to be honest, it doesn’t look nearly as interesting thanks to its incessant borrowing from Pixar’s first feature film, Toy Story.

What do pets do when their owners aren’t around? This is a generic premise that movies have been using for decades, not just Toy Story. That said, a handful of movies have already tackled the pets aspect of that story (the live-action Cats vs. Dogs immediately comes to mind), but I’m not opposed to a different studio trying something new with the concept. After all, Toy Story can easily be compared to The Brave Little Toaster, and who hasn’t compared The Walking Dead to Toy Story?

But then…well, here’s the trailer:

Like Toy Story, we have a pre-established society where pets call the shots. On top of that, we have a main character named Max who is used to getting all of the attention from his owner, exactly like Woody and Andy’s relationship in Toy Story.

The inciting incident appears to be the adoption of a new pet who steals the attention away from the favorite, who is Max in this case. Then the two of them get “lost” and have to find their way home, resolving their differences along the way. I won’t be surprised if getting neutered will be spun as the new “YOU ARE A TOY!” line.

The plot also borrows a key structure from Toy Story 2, in that the remaining pets go on a mission to the city in order to find their lost friend. Gidget’s speech sounds remarkably reminiscent of Buzz’s rallying of the toys to find Woody.

Sure, there are some inventive gags in this trailer, including the poodle’s System of a Down obsession. But then you have the tired jokes where dogs get easily distracted by animals, circa Dug in Up.

And I haven’t even mentioned the visual similarities. Take Max for example. His colors are nearly identical to Woody, from the brown and white to the black, red, and gold.

The design of the “new” dog and Buzz Lightyear are different, but the scope is still there. This new dog is a lot bigger than Max, which is a visual representation of how Max feels around him. The same emotion was captured by Buzz’s space-cool features.

And these aren’t the only characters who are weirdly similar. Gidget, a side character who seems to be the close friend/love interest, shares a similar voice and style as Bo Peep.

In fact, all of the side characters have a reasonable counterpart when it comes to tone and basic visuals.

And that’s still not the end of it. Not only does the plot share a lot of basic similarities, even some of the scenes are ripped straight out of Toy Story:

There’s the bunny, Snowball, who is voiced by Kevin Hart. And from what I can tell, he feels like a fresh(er) character inspired from the Penguins of Madagascar. But his character arc looks a lot like Sid’s in Toy Story. He frees Max and Duke from a cage, then tells them that they belong to him. He’s also maniacal and appears to be sadistic.

Actually, the bunny could more easily be compared to Lotso from Toy Story 3. Both characters are cute on the outside, yet are slowly revealed to be monstrous villains. They both bail out the main characters when they’re in trouble (Lotso provides a new way of life for the toys, and Snowball rescues Max and Duke from Animal Control), only to thrust the heroes into an even worse scenario.

Of course, thoughtful borrowing can lead to great movies. That said, when your work is this derivative in so many ways, it calls the quality of the entire film into question.

I have no doubt that Pets will have some clever jokes and memorable characters. Despite my public disdain for the Despicable Me franchise, I have high hopes for directors Chris Renaud and Yarrow Cheney, who are returning to cement Illumination Entertainment as one of the top animation companies (Eh, who am I kidding? Minions is a billion dollar franchise. They’re already at that point).

But while the movie will cater to the same people who still think the Minions are adorable, I am losing hope in Illumination’s ability to deliver a remarkable story, or anything that will last the test of time for a reason beyond genius marketing ploys.