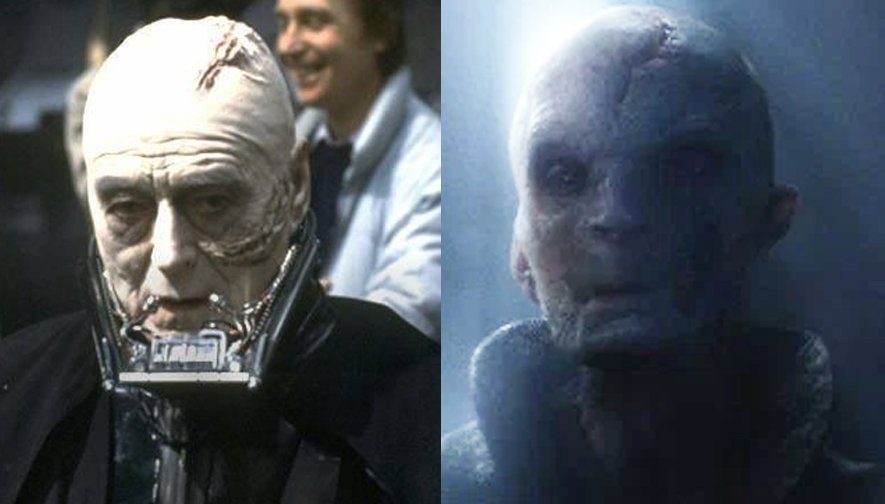 Oh sure, people liked Star Wars: The Force Awakens. But words can’t describe how much people undyingly love coming up with random theories about the movies that offer absolutely no depth outside of: Look! I was right all along and look at me and stuff!

Granted, I posted a theory about TFA just the other day, but at least what I wrote was a character analysis about the film with actual evidence and thought put into it.

What we’ve been getting lately? Well, just read the headline:

There’s an old saying among us Internet writers who’ve been at this for a while. That is, if your headline is phrased as a question, the answer is 99% going to be probably not.

Miraculously, this particular headline’s answer is a resounding are you joking?

Evan Valentine from Comicbook.com proposes this theory, which has gained an expected amount of traction among people like me who accidentally hit the Star Wars clickbait on Facebook thinking it’s actually a recipe video from Tasty.

In a twist that would blindside many,

…for all the wrong reasons…

is it possible that the “big bad” of Star Wars Episode 7: The Force Awakens is in fact a villain that we’re quite familiar with at this point?

Put $30 down for another “He’s Darth Plagueis!” from someone who thinks they’re the first person to suggest this.

A rumor has been rumbling that the ominously massive Supreme Leader Snoke, the puppet master of both Kylo Ren and the First Order, may in fact be none other than the first Sith audiences came to know, Darth Vader!

Also, how is Snoke “ominously massive?” It was clear from the movie that this was just an enlarged hologram, reminiscent of how the Emperor was shown to be a massive floating head in Empire Strikes Back.

While there have been a number of rumors ranging from Snoke being Darth Plagueis,

could it be possible that Snoke is a revived Anakin Skywalker, returning from the grave to try once again to “bring balance to the Force”?

How many times is Evan going to ask us what is and isn’t possible? Of course it’s possible, just like if Rian Johnson decided to devote 30 minutes of Episode XIII to a Jar Jar Binks dance number on Cloud City featuring the alien from Mac and Me.

But this is the Internet, so Evan’s main argument is going to be “Well, you internally said it was possible, so that means evidence.”

The biggest piece of evidence we are witness to are the scars on Supreme Leader Snoke’s head and face, pointed out to us by fan Joey Garza.

Who? Seriously, if you’re going to credit this ripoff, at least link to whatever Reddit post Joey threw this in.

Snoke is humanoid, albeit a completely computer generated creation for the film, but seemingly has scars and wounds that are almost identical to the ones that Darth Vader/Anakin Skywalker had underneath his mask and helmet, revealed during the finale of Return of the Jedi.

This is Darth Vader (unmasked): 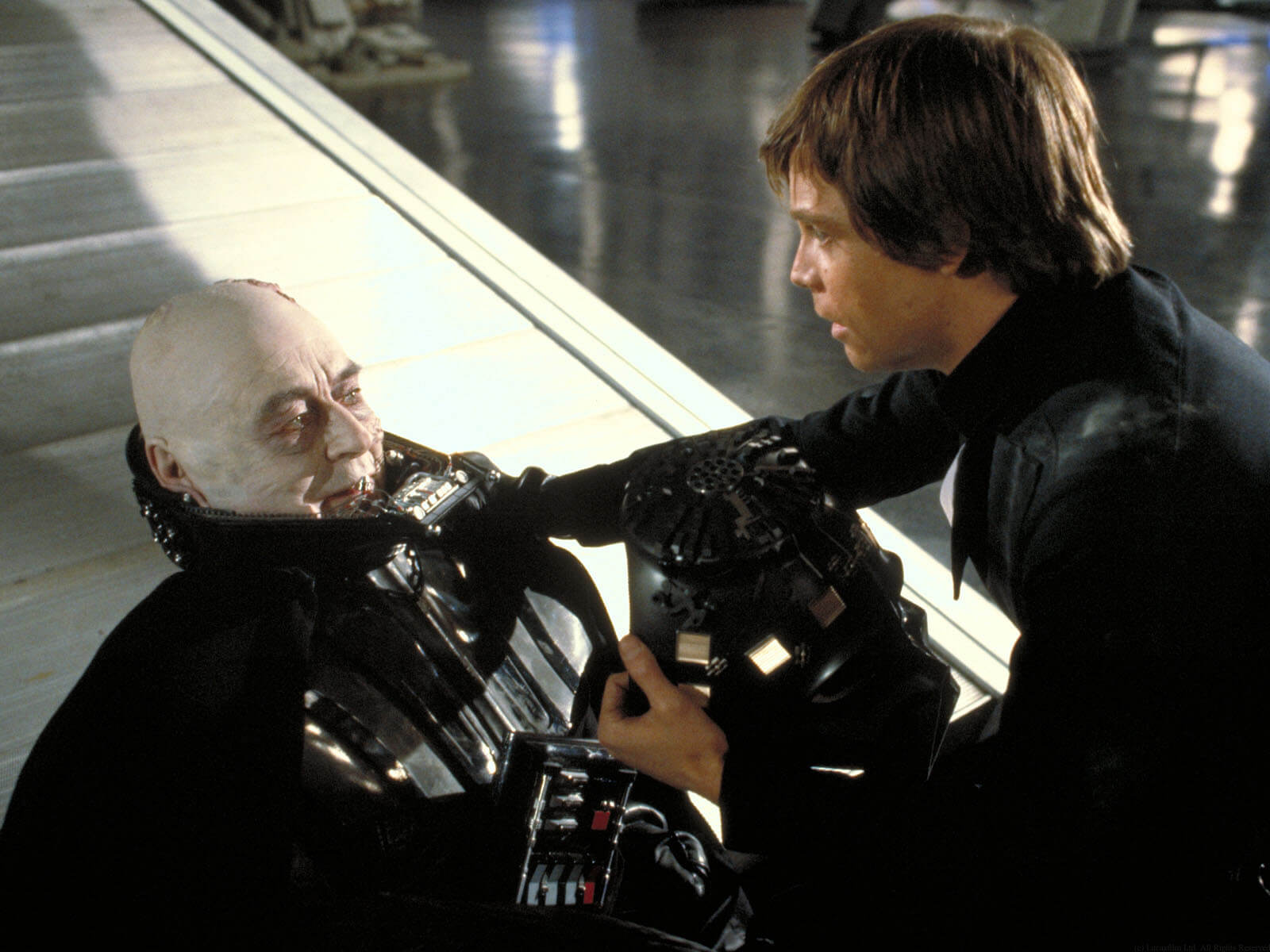 Their scars are not “almost identical.” They don’t even have similar-looking heads or facial structures. Evan and the other perpetrators of this “theory” just looked at one scar and said “Close enough for half the Internet to believe this!”

Obviously, we know how Anakin received his scars, but we have no clue as to what happened with Snoke.

But who needs watching the movies over the next few years to find out. We have to pointlessly speculate with little-to-know evidence at our disposal. That’ll show Disney for trying to surprise us with silly things like plots and writing.

Their placement and appearance is downright shockingly identical

If you’re looking through the goggles of Maz Kanata, maybe.

While Snoke and Vader’s scars are similar, it could also be a method used by Snoke in order to have gotten closer to Ben Solo, eventually turning him into the monster that is Kylo Ren. Rather than actually being Vader, Snoke could have modeled his appearance after Vader’s to play on the young, inexperienced force wielder’s admiration for Anakin Skywalker

So the guy “pretending to be Vader” is going by a different name…and says nothing while Kylo Ren worships the helmet of the real Vader. Yeah, that makes perfect sense.

Darth Vader could potentially have come back, leading a new empire to finish what Palpatine had started in the original trilogy.

Did…did you see Return of the Jedi? Like you know what that movie is? The one where Darth Vader turns good in the end (late spoiler) and kills Palpatine?

The Plagueis story in the prequels leads credence to Vader returning from the grave,

Oh yes, the story of the Sith Lord who could prevent death in others, but failed to prevent his own death. Yeah, I’m sure that’s what lead Vader to reviving himself.

This is however 30 years after the original trilogy, and Vader was looking quite worse for wear when all was said and done then, imagine how he’d look now and you might think of a figure close to Supreme Leader Snoke.

Yeah, especially after Luke and friends burned his entire corpse. But don’t let that little tidbit get in the way of your “evidence.” There has to be a reason, after all, why Hayden Christensen is the actor who shows up as a Force Ghost instead of Sebastian Shaw. He was busy reviving himself thinking, “Oh no! I do love Palpatine and need to turn Han’s son against him! I guess this will take 30 years.”

Kylo Ren’s devotion to both Darth Vader and Supreme Leader Snoke would also lead to the idea that they were one in the same,

I’ll be sure to let my grandfather know he’s let me down for not being Tom Brady.

During all the events of the original trilogy, there was never even a hint that there was some older Sith who was biding his time, so the idea that Snoke is an already existing character isn’t a fantastical one to be sure.

And that’s the theory. I know, I could have easily done a takedown of “Rey is a reincarnated Anakin” or “Finn is the son of Yoda.” But for whatever reason, Supreme Leader Snoke has become one of the lynchpins of Star Wars speculation, outside of which character Rey is somehow related to.

Is it because they love Star Wars and want to share their ideas about how everything will play out?

9 thoughts on “Snarcasm: Supreme Leader Snoke Is Secretly Every Character in Star Wars”