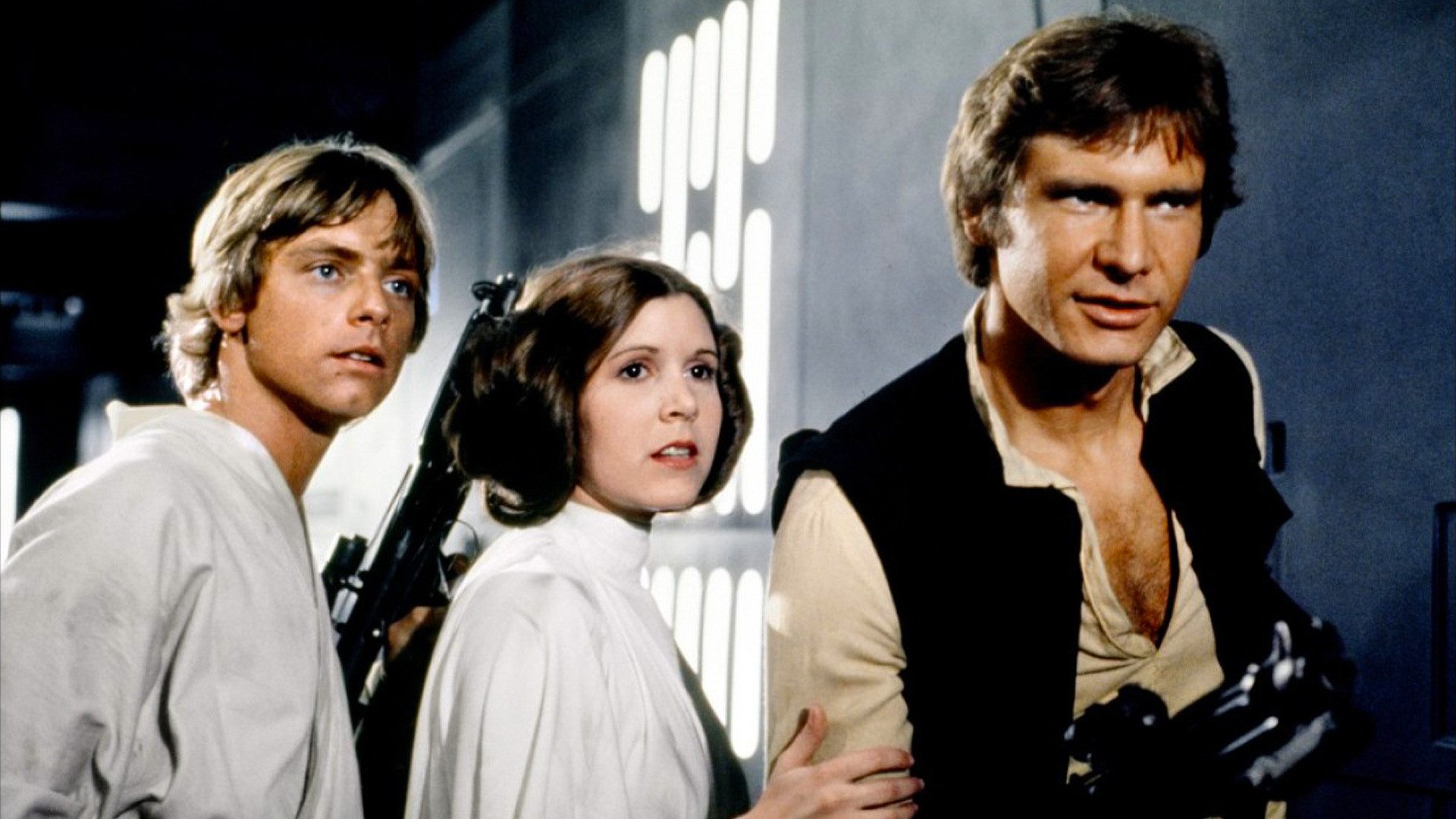 Later this week, a new Star Wars trilogy will be kicked off by The Force Awakens. In preparation for this event, I’ll be rewatching the original trilogy (from A New Hope to Return of the Jedi) each day this week. My goal is to reevaluate these films’ merits, decades after their release.

This is also a discussion post, so if you have any lingering thoughts about the original trilogy after reanalyzing them yourself, be sure to sound off in the comments.

George Lucas, the creator of Star Wars, claims to have always intended A New Hope to be the fourth entry in a series of “episodes.” When Star Wars (1977) premiered, the studio allegedly forced him to omit this chapter heading from the opening credits, because they believed it would confuse audiences.

Since then, A New Hope has become the de facto title, and for good reason. Much like the first act of a movie, A New Hope serves more as an introduction of characters, rather than a full story. And the creators of this film did a fantastic job of making it feel like it could be more than just one movie without delivering something that felt incomplete (a mistake studios have been making pretty frequently these days with their non-starter franchises).

The story is simple, yet set against a vast and complicated setting. The characters are easy to understand and relate to, but their circumstances and backstories feel rich and unexplored. Part of the fun that comes with Star Wars is letting your imagination fill in the blanks when new story elements are brought in, including the reveal of the Force, the Clone Wars, and the history between Darth Vader and Obi Wan.

Simply put, the characters exist in a world that feels different, but familiar. The sounds aren’t synthesized and foreign. The materials are imperfect and rusty. This is a fantasy that is more down to earth (so to speak), making it feel more “lived in” than many other epics we’re used to seeing. 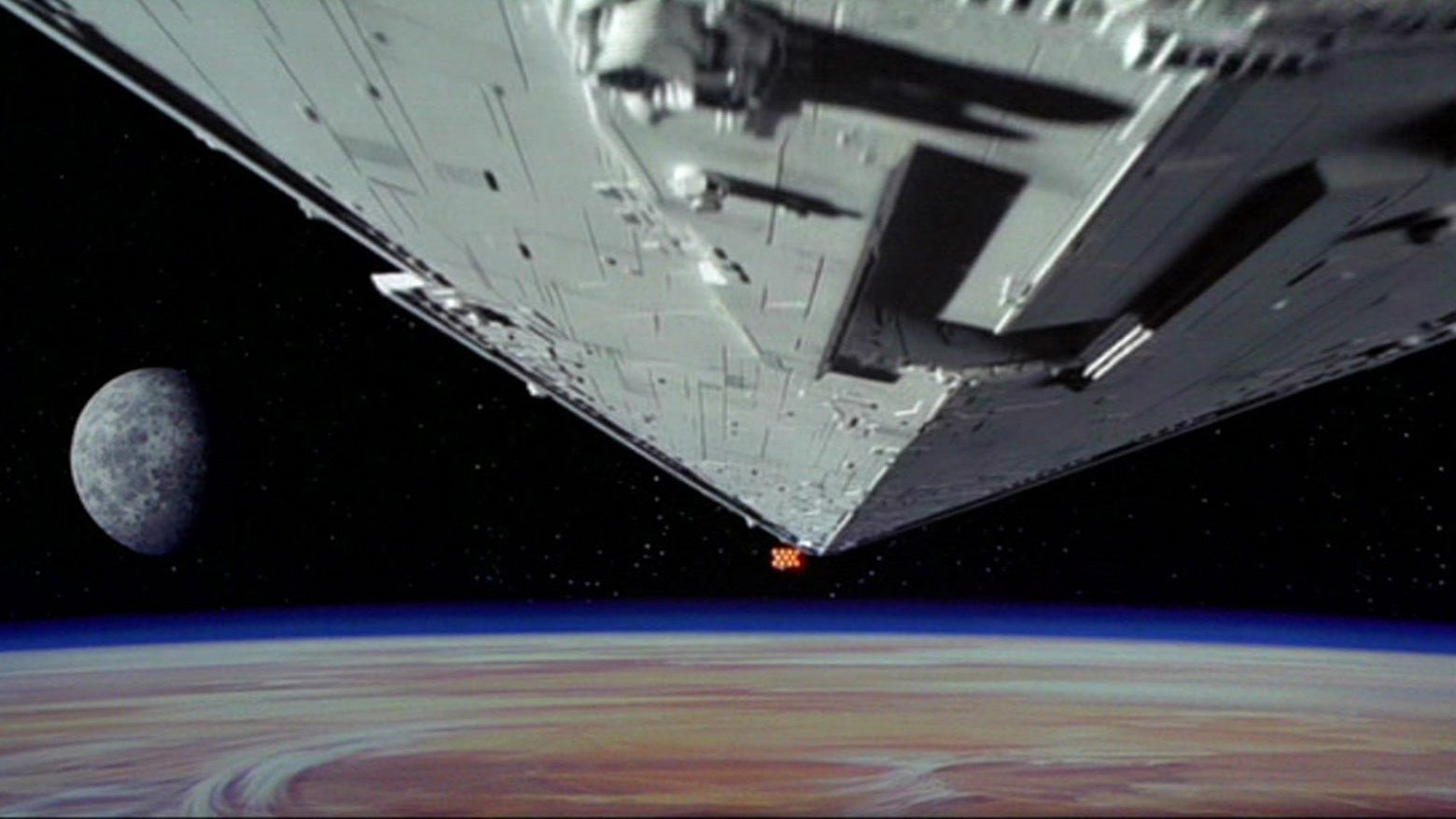 A New Hope begins with a swift explanation of who the Empire is and what they’re capable of accomplishing. Their massive ship descends upon a remarkably smaller one on the run. The stormtroopers easily break through the rebel soldiers on the ship and quickly take over.

This entire sequence is well-done because it manages to convince you of how powerful the threat of the Empire is without having to really say it. And your understanding of this conflict between the rebellion and an all-powerful military keeps building from there.

A lot of people tend to dislike what happens next, when the movie shifts perspective to the two droids who escape this ship and wander the desert planet of Tatooine. True, this entire sequence drags a bit, but consider how peculiar it was for the movie to spend so much time on the story of these two droids, who are arguably the crux of this entire movie. The plot moves forward because of them, and they’re essentially the glue that brings all of our main characters together. I don’t think A New Hope would have worked quite as well if the movie hadn’t given them this chance to establish their legitimacy in the story.

Because the movie builds from each of these moments, the ending will feel huge when you consider that it all started with these two droids. It was a novel idea that truly paid off. 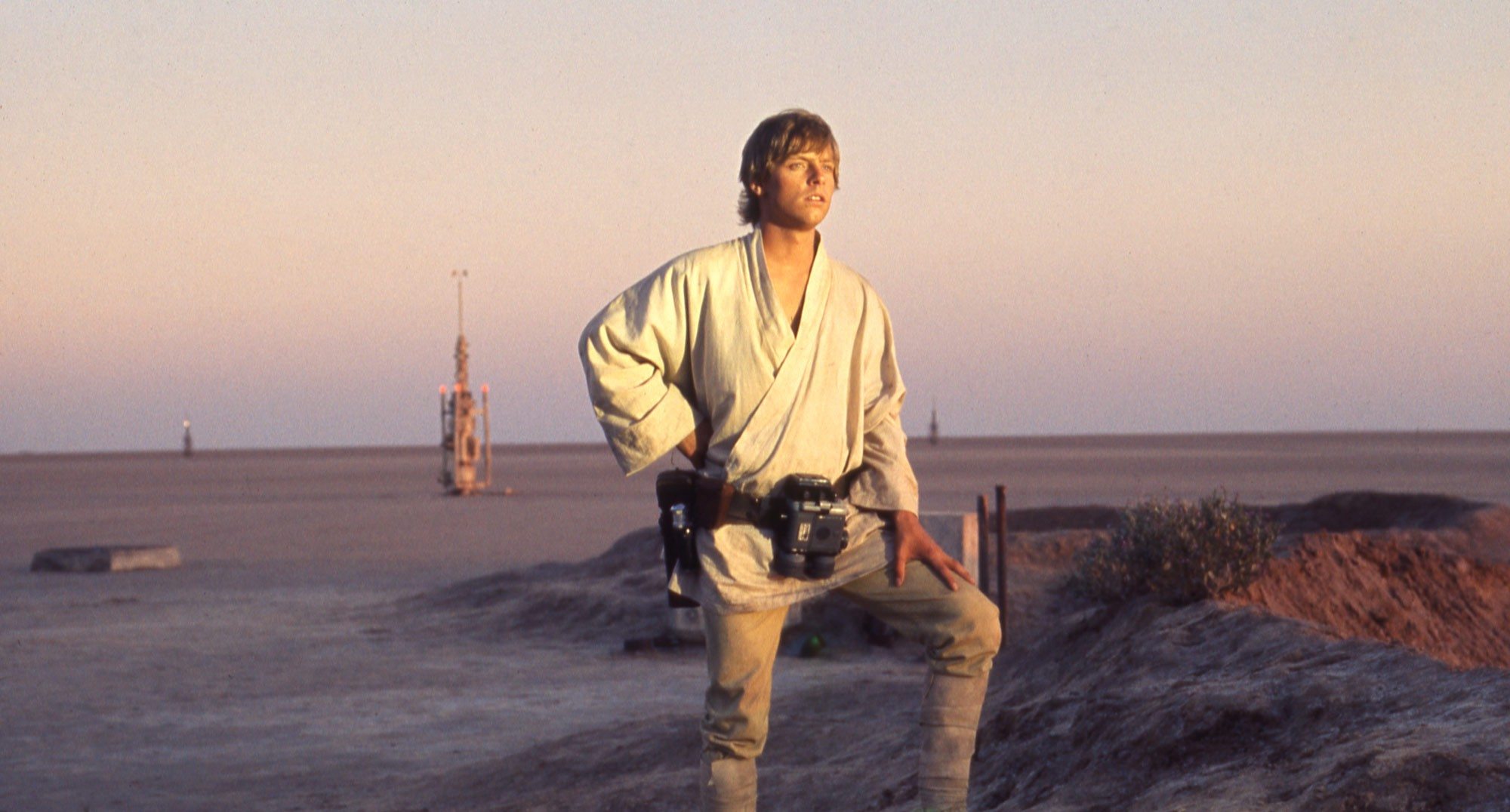 I’ve always appreciated the handling of Luke Skywalker’s introduction. It’s very modest and believable, so it takes you a few minutes to grasp that this is the story’s main protagonist (and John Williams is there to help you figure it out in one of the movie’s best scenes).

Granted, he’s a bit whiny, and his worst lines of the franchise occur in the first half hour. But it’s clear that making him a little unlikable at first was Lucas’s intention. It made his story arc much more interesting and expansive, making it a treat to rewatch his journey in later viewings.

The movie’s only major bout of exposition comes during Luke’s first extended conversation with Obi Wan. Here, Obi Wan tells Luke about his father, the Force, the Clone Wars, and all sorts of other plot points that we’re hearing about for the first time.

But because Alec Guinness delivers this long scene with such grace and gravitas, it actually works. Most sci-fi movies that are this high-concept typically fall flat on their face by the time the characters erupt with exposition, but they casted the perfect actor to help us get invested.

Mos Eisley serves as an excellent set of scenes that help establish more of our characters, along with some new ones. Interestingly, Luke gets very little development here, which is for the best. Instead, Obi Wan gets a chance to prove to the audience that he really is a powerful Jedi Knight. The mind trick — which is gracefully explained in just a short sentence — and Obi Wan’s quick lightsaber demonstration get the point across that the Force is a dynamic, mysterious tool our hero can one day use.

At this point in the movie, we just want to learn more about the Force and see all of this Jedi lore in action. But the movie instead branches off into the story of our next main protagonist, Han Solo. We’re quickly introduced to the more grounded aspect of this universe, which is another saving grace for this franchise. And like Luke, Han doesn’t arrive with fanfare. We don’t truly understand his importance to the story until his fateful confrontation with Greedo, which tells us more about his character in less than a minute than some movies can do in two hours. 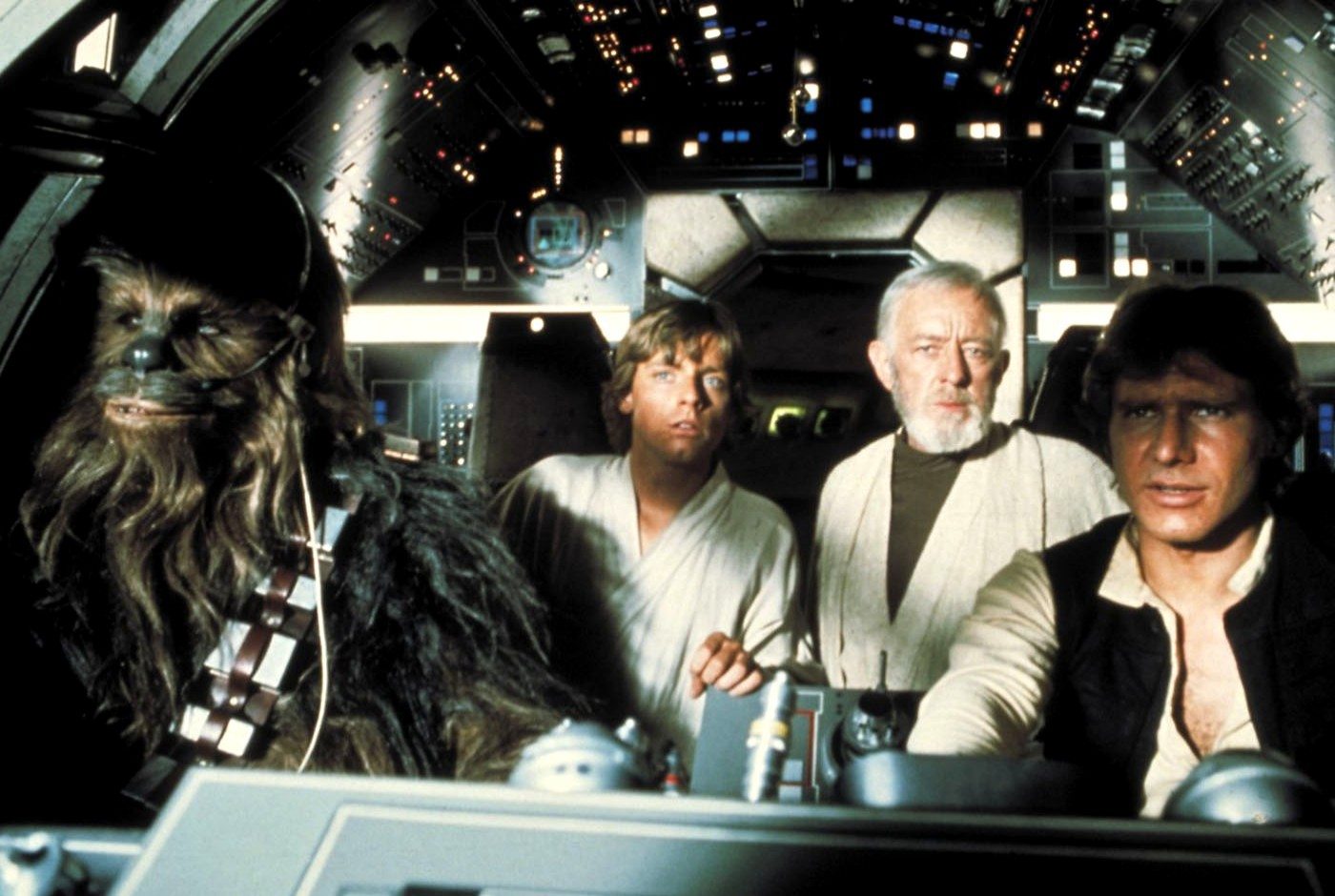 The next act of the movie is arguably its best, as we watch these characters go on their first real adventure. And it’s right in the heart of the Death Star, a massive space station that’s been shown to have destructive powers beyond even our heroes’ imaginations. At this point, I was still reeling from the quick elimination of Luke’s entire family, an event that truly sets the stakes as we see just how hopeless it is to resist the Empire. Now, once we have a few allies and (dare I say it) hope, our heroes are plunged into a pretty hopeless situation.

To be fair, we know that this has to happen in order for Luke to meet Leia. But the fate of Obi Wan and other somewhat extraneous allies seems murky. Throughout the entire sequence on the Death Star, our heroes are faced with increasingly dangerous threats that keep us entertained and wanting more.

But the true grab of the Death Star scenes is watching these characters interact and play off of each other. It’s great because this is the result of all the character development achieved in the first act, so watching them together onscreen is both fun and engaging.

To be fair, some of what happens on the Death Star is pretty silly and oddly convenient. Han rushes into a hallway full of stormtroopers, and they run away from him for no reason. Our heroes don’t get shot once by these apparently “precise” soldiers. Luke makes a weird lasso to get away from stormtroopers who have the high ground on him, and it actually works without him or Leia getting injured, despite having no cover. And there’s very little Obi Wan action, to the point where I actually forgot about him. 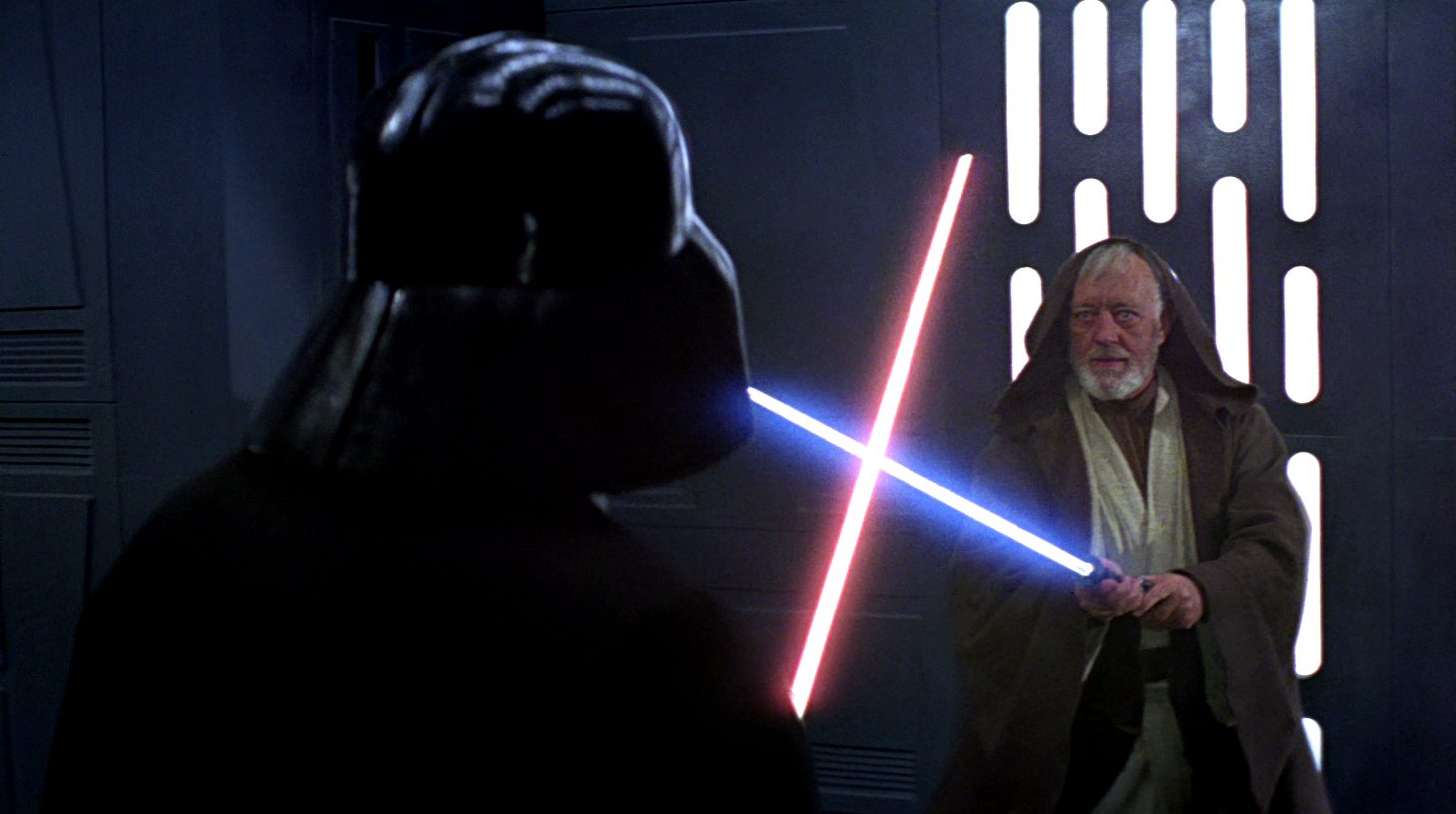 Of course, Obi Wan and Darth Vader battle, which is a pivotal scene. It establishes Vader’s lightsaber skills, and it validates their history only alluded to earlier. Honestly, I found this scene pretty underwhelming the very first time I ever watched it, but it’s grown on me over the years. Yes, they’re tapping their lightsabers slowly, but the thing to remember is that Lucas originally intended the lightsabers to be extremely heavy, which was changed for later movies.

Once you forego the belief that the lightsaber fights should be quick and pretty, this scene becomes a lot more interesting. You focus more on what’s going on between the characters, which is really what the point of this scene is. It’s not the best lightsaber fight, to be sure, but it’s definitely not the worst.

The final stretch of the movie is also its most critical. By the time our heroes escape the Death Star, there’s little chance for rest and mourning as Luke is summoned to fight off more of the Empire with Han. This is the part of the movie I like the least, not because it’s a bad scene, but because at this point, I’m exhausted. Danger upon danger has been thrusted upon these characters, and though the reality of the story demands it (they can’t just get away that easily), I was ready for Luke and the gang to take a breath.

Thankfully, we do get respite in the third act, though only for a moment. Lesser movies would have extended the Death Star scenes in order to borrow its weight for a climax, but A New Hope opts to show us the heart of the rebellion. On Yavin, we see what the alliance is truly like, and we get a chance to see Han Solo weigh his choices that have been building up since Tatooine. Will he stay and help, or will he take off with the reward? Both choices are believable, which makes his confrontation with Luke all the more heartbreaking when his “May the Force be with you” is met with silence. 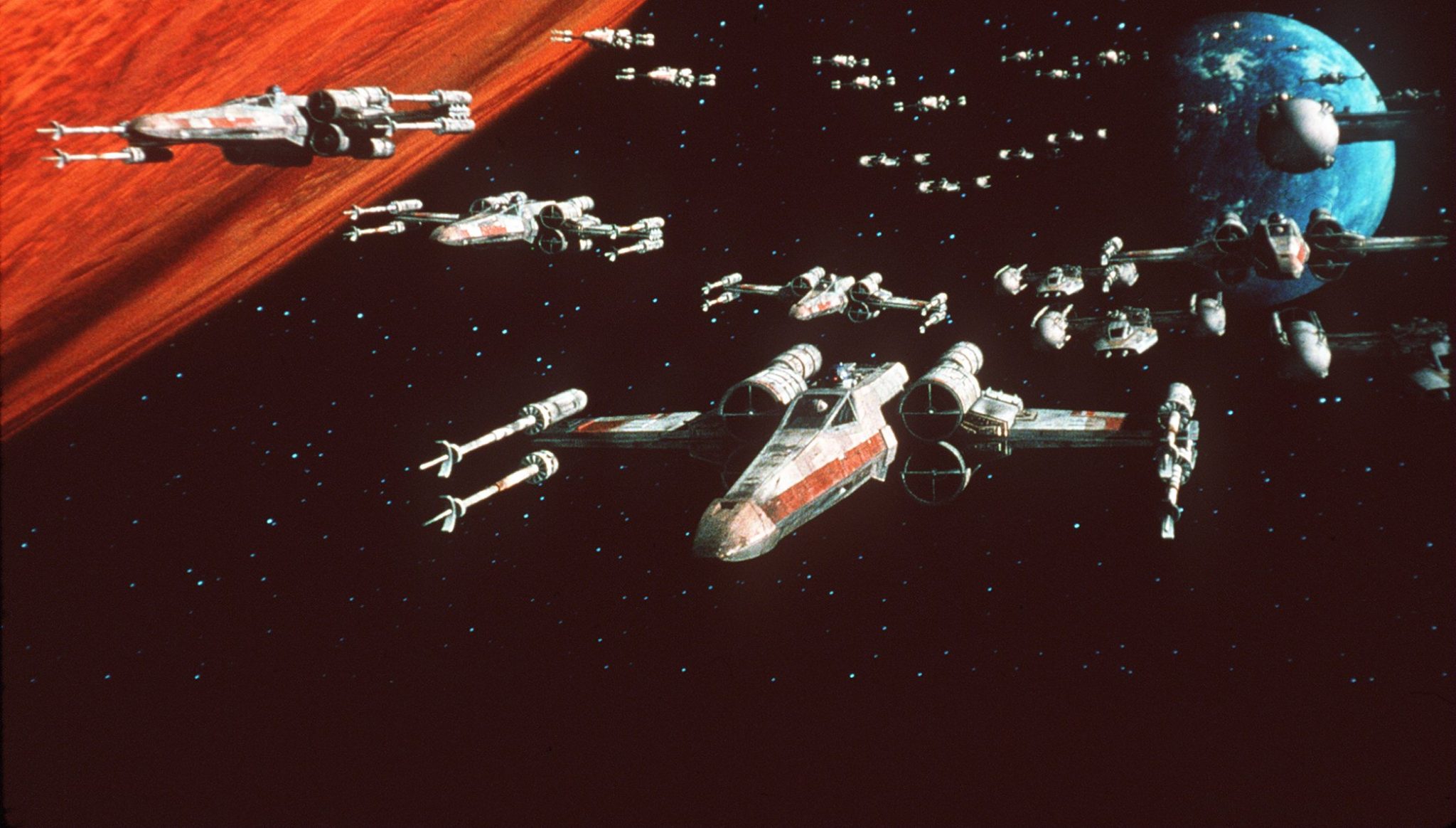 The symbolism in the movie’s climax isn’t subtle, which is probably why it’s so effective. Almost all of Rogue Squadron is eliminated, including Luke’s childhood friend. Up to this point, Luke has relied on wit and creativity to make it out of each predicament he’s been in, but for the first time, he has to rely on the Force to save the lives of his friends. All while dealing with the fact that Darth Vader’s ship has picked off all of his allies, with the exception of Wedge.

Two things save the day: Han’s rescue and Luke’s reliance on the Force. These are two somewhat disparate elements, as one displays the loyalty of a friend, while the other is otherworldly and focused on the promise of someone departed. In fact, it’s these two strengths that Luke will have to weigh as the next two movies progress, making for a brilliant first entry in the trilogy.

We do see that Darth Vader survives this battle, opening up the film for sequels. But aside from that, this is a massive blow to the Empire that symbolically shows that the rebels do have a fighting chance. In that way, the film could have easily stood alone, hinting that Luke’s transformation into a Jedi Knight was well underway. And with Han, Leia, Chewie, and the droids at his side, who could stop him, right?

A New Hope is definitely one of my favorite films of the franchise, by far. I only touched on some of what I love about the film here, but I don’t doubt that many of you reading this can relate. Let me know what you think about A New Hope below, and I’ll see you back here tomorrow to talk about The Empire Strikes Back.