For every Snarcasm piece, I usually feature what I brazenly call “the worst articles on the Internet.”

But this week, I’m doing something a little different.

Samuel James of ScreenPrism wrote his own “Pixar Theory,”  and asked (sort of) to get my opinion on it. I asked him if he wouldn’t mind letting me give his hard work the Snarcasm treatment, and his answer was ambiguous enough for me to just do it anyway.

Sorry, Sam. You let me ask for it.

Writing for the “Insights” column, Samuel asks the question,

Is Syndrome the Illegitimate Son of Mr. Incredible?

Now, I know what you’re thinking. If a headline on the modern Internet poses a question, then we automatically know the answer is “NO.”

But let’s give Sam a chance to explain what he means by the words, illegitimate, son, and Mr.

Since their beginning with Toy Story (1995), Pixar Animation Studios have opened an entire universe of magical films for both adults and children to enjoy.

I’m seriously nitpicking here, but Toy Story does not mark the beginning of Pixar. They started working on animated shorts and commercials nearly a decade before finishing their first feature film.

Jon Negroni has argued convincingly [link] that all 15 Pixar films, from Toy Story in 1995 to the latest Inside Out in 2015, are all connected in the same world, based on interactions on Earth between humans, animals and machines.

The idea changed my perception of the Pixar universe, and I would love to believe Negroni is right.

Sam gets the spirit of The Pixar Theory, which I love. It’s not about this theory being right or wrong. It’s about wanting to believe it’s possible. I’m still going to be mean, though, because this. Is. Snarcasm.

Now, I have a Pixar theory of my own to share on The Incredibles (2004): what if Syndrome, the film’s eventual antagonist, is actually Bob Parr (Mr. Incredible)’s illegitimate son from a relationship that preceded his marriage to Helen Parr (Elastigirl)?

I guess stranger theories have been made? But I can’t help but notice already that The Incredibles gives us zero insight into what Bob Parr was up to before he fell in love with Helen, so this claim is already making me think this is a stretch…

I have considered this possibility over ten years and multiple viewings of the film, and, regardless of whether it matches Brad Bird’s intentions, this reading makes sense and the whole film more interesting.

In other words, I’m right, even if it’s obvious I’m wrong.

He has followed my work!

Um…the prologue isn’t set 15 years prior to their birth. That would mean they’re zero years old after the time skip. I mean, I know Dash is short, but…

One more nitpick and I’m done-ish: the prologue isn’t “just before” their wedding, it’s during their wedding. OK, I’m done…ish.

When Mr. Incredible and Buddy (Syndrome’s name as a child)

You mean, his real name?

first meet inside the former’s superhero car, there seems to be a striking resemblance.

Wait, you’re saying they look the same? How? 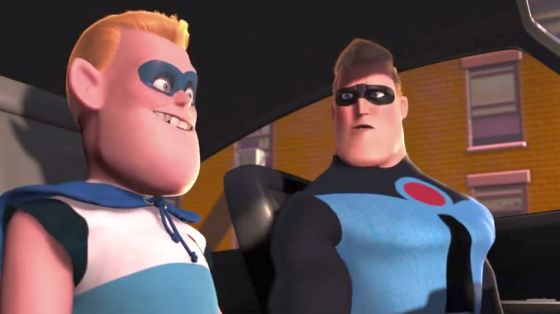 Buddy’s ears, nose, mouth, jaw, and eyes don’t resemble Bob’s at all. Their hair isn’t even that similar, just blonde. And they’re white. Is this racist? Er-superist?

This is all happening too fast.

Suggests? Buddy straight up tells Mr. Incredible that he’s his biggest fan. It’s obvious he calls himself “Incrediboy” because he’s longing to be Mr. Incredible’s sidekick. It’s about as subtle as a Donald Trump supporter’s Facebook profile.

but the fact that they look like each other may argue there is a hidden father-son relationship that the narrative has kept as subtext.

It’s not a fact that they look like each other. They barely even look similar. Please don’t tell me this is the crux of your argument, because I need these Snarcasms to be more than 800 words…

As a child, Buddy seems to look up to Mr. Incredible with more intensity than he would if merely a fan.

Well, yeah, this is no secret. Again, he tells Bob that he’s his biggest fan. The intensity is even explained more later on, when Buddy feels left out and wants to rid the world of all supers, not just his alleged “father.”

Wearing similar attire is just fandom, but Buddy’s angry and devastated reaction to being rejected by Mr. Incredible implies he has higher expectations of the man, and the pair could be father and son.

Sam is essentially saying that you can only have high expectations when it comes to your father.

Forget about teachers, college professors, your personal trainer, and Drake’s future choreographer. If you’re obsessed with being someone else, then that obviously means you’re related to them. That explains why Brad Pitt has so many children…

Brad Bird already wrote and directed a Pixar film in which a young man finds out his true paternity –the Linguini and Gusteau relationship in Ratatouille (2007)—but in The Incredibles, this could be a hidden narrative implication.

Oh! I can do this, too! “WALL-E falls in love with a machine in his movie, so that means the hidden meaning behind Toy Story is that Andy secretly wants Woody to be his boyfriend.”

I feel gross all of a sudden.

After trying to help him, Mr. Incredible rejects Buddy completely and tells the police officers, “Take this one home and make sure his mom knows what he’s been doing.” It may just be vague language assuming that kids are monitored primarily by their mothers,

Let’s just say you got it right the first time—

but the fact he just says “mom” instead of “parents” or simply “mom and dad” could imply that Mr. Incredible either knows Buddy is from a single-parent family or knows his mother.

Or it could mean that he wants Buddy’s mom to know what he’s been doing.

I love it when just knowing who someone is means you had a complicated romance with them that resulted in a lovechild. I get that all the time.

“Yeah? Well, how many kids do you two have, Brad?”

and perhaps even left her and Buddy behind to be with Elastigirl (which could also be Syndrome’s motive to want to kill her too).

Clearly, because it had nothing to do with Buddy’s determination to kill all supers, which is what he was already doing long before he knew Mr. Incredible and Elastigirl were married (he admits he didn’t know they were together, remember?)

In case you’re wondering what I look like right now:

Buddy becomes Syndrome and extracts a plot, through Mirage, to gain revenge on Bob. Upon meeting again, Syndrome explains his traumatic childhood (after the rejection) through a brief flashback and attempts to kill him. When the attempt fails, the only adequate way to make Bob suffer, in Syndrome’s mind, is to kill his new family.

Buddy didn’t even know that his family was on that plane, Samuel. He just says, “So you do know these people?” And then he sends the missiles.

He doesn’t find out they’re Bob’s family until way later, and even then, he doesn’t kill them immediately. He just holds them in captivity like any other super villain. How many times did you watch this over the course of ten years?

This could be because Syndrome never got the childhood attention from Bob, as a father and hero, which Dash, Violent and Jack-Jack were getting.

This isn’t apparent at all. There’s no moment when Syndrome looked at the kids and seemed jealous, or wished for what they had. He just wants to see Mr. Incredible lose everything that’s dear to him.

In the climax scene at the Parr home, Syndrome doesn’t really attack or attempt to kill the family. Instead, his intention is to kidnap Jack-Jack, the youngest child. Syndrome’s motive is to rid Bob of his infant child and recreate the paternal loss that he himself experienced from childhood, even at one year old.

You just said that he apparently wants to kill Bob’s family. Which is it, then?

And Buddy says he wants to kidnap Jack-Jack to “steal” their future, just like they stole his. They didn’t steal Buddy’s “past,” which is what your theory implies.

Buddy even says mentor when he’s talking about taking Jack-Jack under his wing in a way that Bob never did. If Bob was his father, and Buddy knew this, then wouldn’t he have said father?

And, and, and, ANDDDDDD…

Bob shows no remorse or sadness when Syndrome dies. This could indicate Syndrome in fact wasn’t his son, but the narrative doesn’t address Bob’s response to Syndrome’s death in depth in a particular shot or any dialogue.

Of course it doesn’t. The guy tried to kill him and steal his kid. Would you show remorse if the guy got what he clearly deserved?

Bob shows relief. The nightmare’s over. His family is finally safe, and the villain has been defeated. No depth necessary.

This whole theory may sound crazy, but it potentially adds more depth to Syndrome/Buddy’s character,

Does it? Being related to someone adds about as much depth as you would see in a soap opera.

When Luke finds out that Darth Vader is his father, the impact is huge for more reasons than a blood test. This is the guy Luke believed killed his father. This is the guy who killed his mentor and blew up the planet of one of his friends. This is the biggest, baddest, guy in the galaxy, and Luke now has to deal with the fact that he’s the son of this man, which means he’s capable of darkness, too.

But in The Incredibles, the friction between Buddy and Bob is readily explained. It already has depth and doesn’t need an arbitrary link to explain itself or become “more sophisticated” as Sam later says. It’s not like anyone left the theater wondering why Buddy was a villain. His backstory, in this case, is quite sufficient. 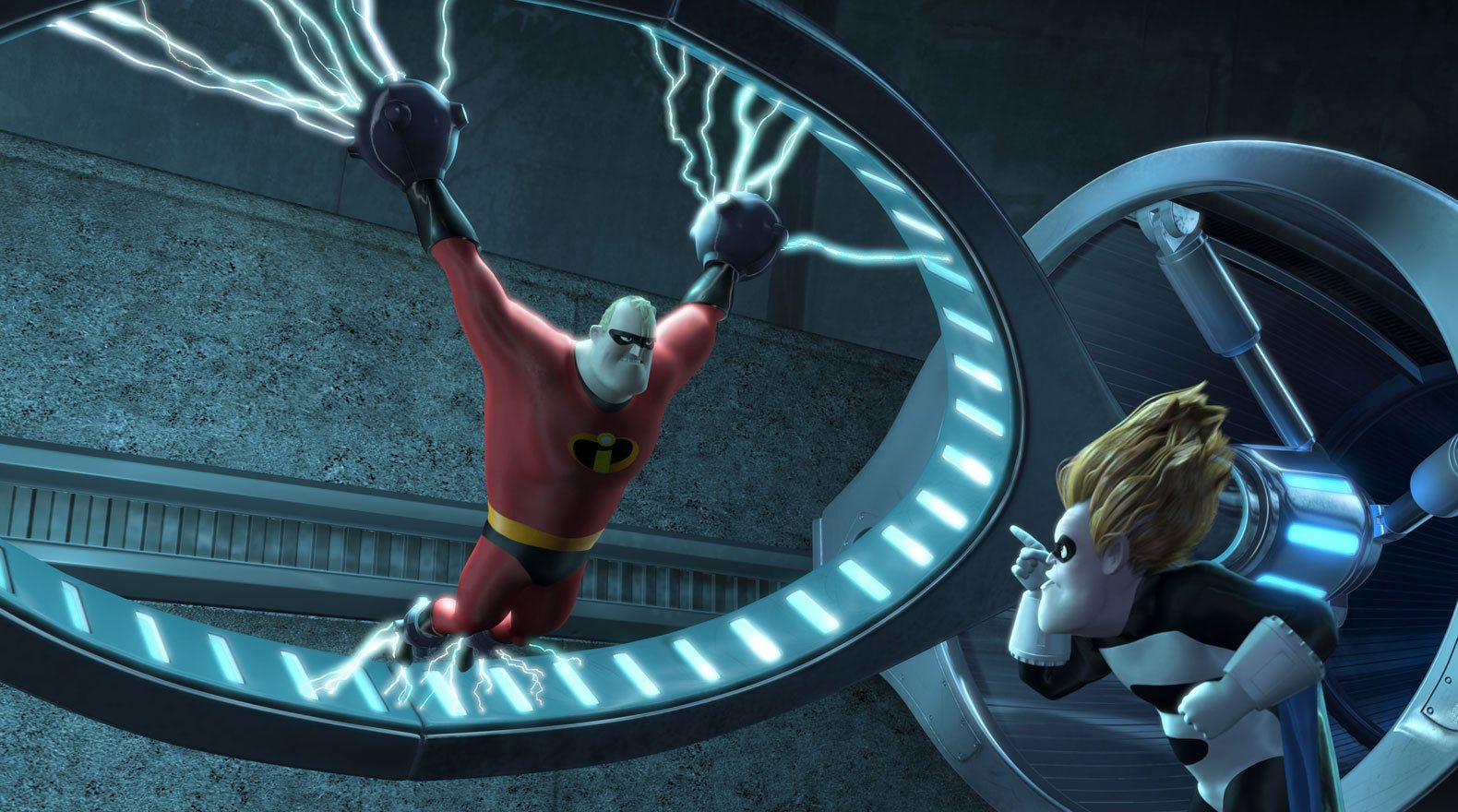 Maybe I’m being harsh (OK, I’m being incredibly harsh and terrible), but my point is that if you’re going to suggest that two characters in a movie (or movie universe) are related without much evidence, then at least explain why it would make the movie better.

In this case, I can see that Sam is really trying to do that, though he definitely comes up short with the argument that true drama is just a matter of who people are sleeping with (what has The CW done to us?)

Now, if Sam can elaborate on that Brad Pitt=Brad Bird theory we stumbled onto earlier, then he certainly has my attention yet again…