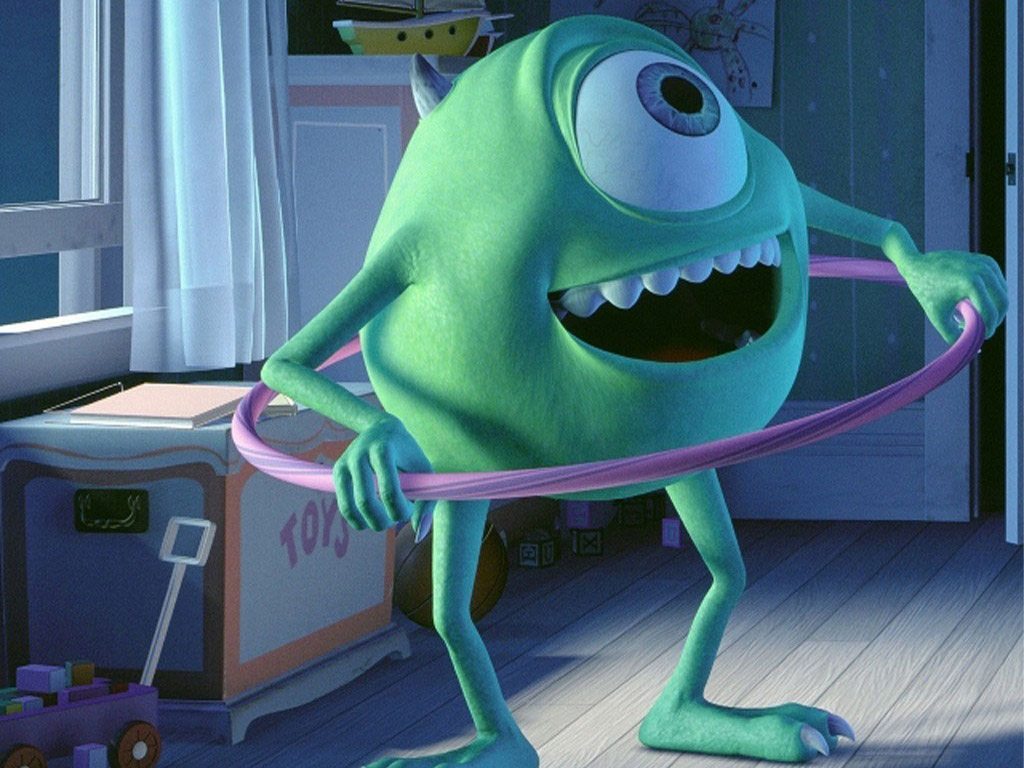 Since the release of my new book, The Pixar Theory, I honestly haven’t given much thought to expanding these Pixar-related connections because…vacation.

So, I’m back and here’s something potentially interesting for you to seek your teeth into. A few weeks ago, a regular visitor to the site (cheers, @ThomastheBrainEngine), brought me some interesting evidence of toys being “self-aware” in Monsters Inc, a la Toy Story.

In Toy Story, we learn that toys are sentient. They move around on their own when we’re not watching, and their entire lives revolve around the children who love them.

One of the main tenets of my theory, which tries to unite the Pixar movies, is that toys are alive because in the Pixar universe, human imagination is like a battery, and it gives life to ordinary things (maybe even cars). 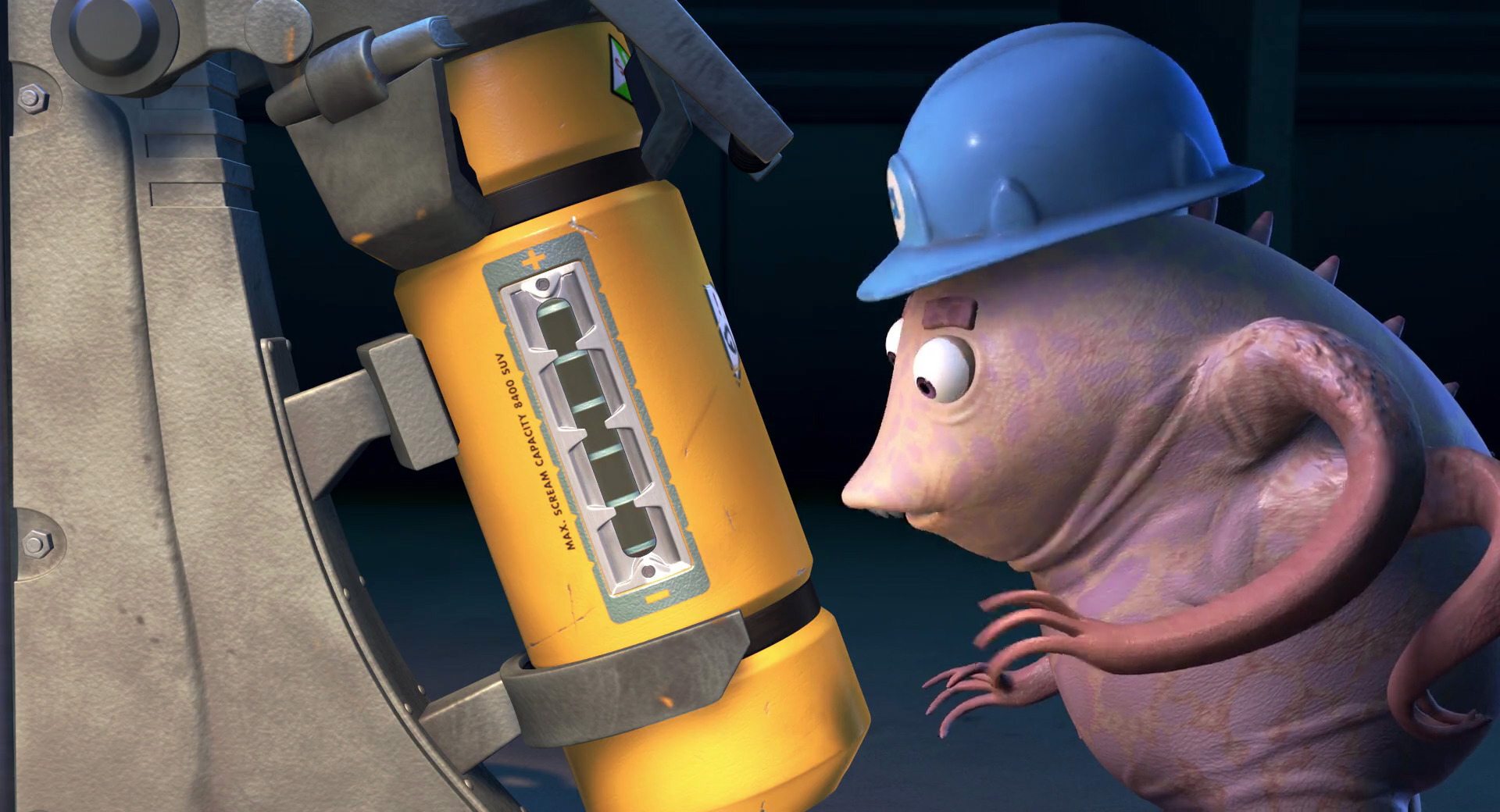 I argue that this is the same concept as monsters powering their society with the energy of children in Monsters Inc. But despite a few cameos (like Jessie and the Luxo ball), there’s nothing tangible linking Toy Story and Monsters Inc, especially if you consider Jessie’s appearance in Monsters Inc., to only be an easter egg, not a hint to something more.

But ThomastheBrainEngine presented a fascinating thought that I had not yet considered: what if we do see evidence that the world of Monsters Inc. has sentient toys?

So I looked into this, and the evidence is solid, believe it or not. And it all hinges on the movie’s first scene.

Mr. Bile, can you tell me what you did wrong? 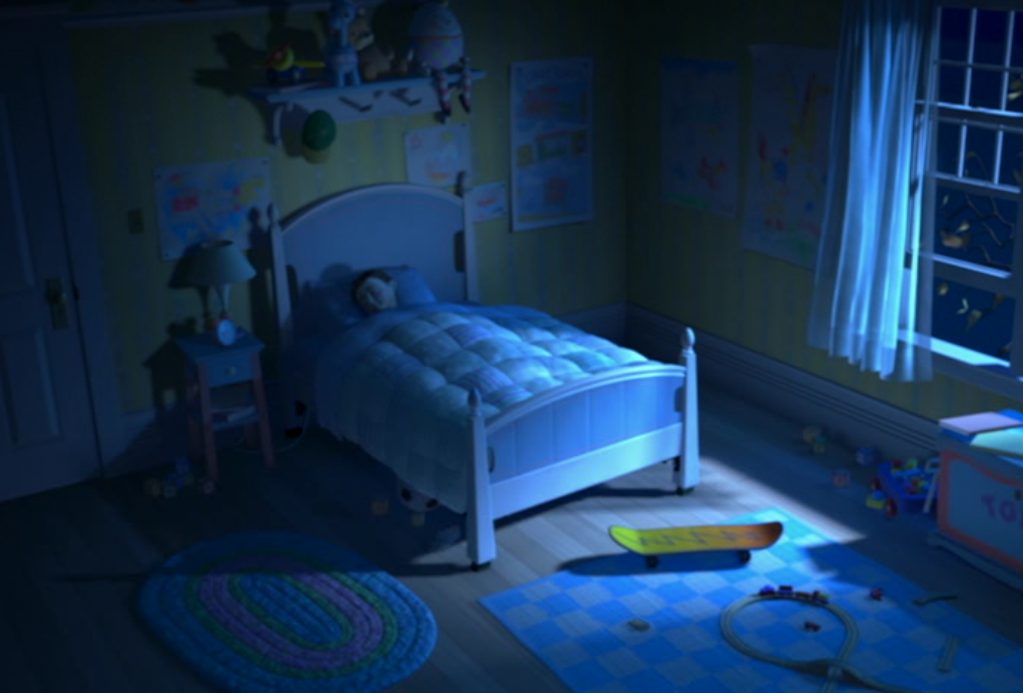 This opening sequence introduces us to the basic mechanics of how monsters scare children. The monster, Mr. Bile (Phlegm), sneaks into a child’s room and attempts to scare him, but the kid wakes up and sees him. We see that Mr. Bile is actually more scared of the child than vice versa, and he trips and falls for comedic effect.

This, of course, is a simulation. A demonstration of how not to scare a child, so that the movie can cut to Sulley, our main character, who is the best scarer at Monsters Incorporated. The simulation we just watched was at the factory, and it’s our set up for everything that happens next in the movie (notably, that the worst thing you can do is let in a child by leaving the door open). 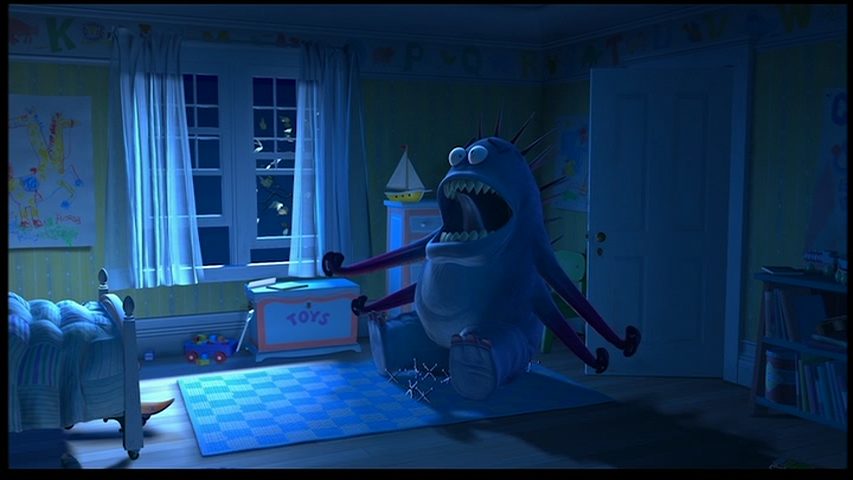 Something that has bugged a lot of people, including myself, is a major goof (or series of goofs) that transpires during the simulation. When Mr. Bile walks in, we get a clear shot of the room’s layout and where everything is located. The soccer ball is under the bed, the toy train and its tracks are at the foot of the bed, and one of the books near the window hangs over the edge.

But as the scene changes, everything moves around. The soccer ball inexplicably moves to the side of the bed. It’s in a totally different location, and it eventually shows up again at the foot of the bed, where the train tracks have disappeared. Instead, there’s a bunch of jax in its place. Mr. Bile steps back on the soccer ball and falls on the jax (see above) like we’re watching a better version of Home Alone 3. We even see that the books on the toy box have moved a little bit, but they return to their original spot toward the end of the scene.

It’s nitpicking, but I’ve always been annoyed by how overtly obvious these goofs are. I’ve sat through a dailies session at Pixar, where the director and a group of animators will scrutinize every single aspect of what’s on the screen. Even for a movie that was made in Pixar’s early days, it’s strange to think that they could make so many continuity errors in just a couple of minutes, and the movie’s first few minutes at that.

Granted, these goofs happen all the time, and some are caught too late in the game to be considered worth the effort of fixing them. But they’re usually separated and scarce, not gathered in a cluster.

So, what if this entire scene wasn’t a goof at all? What if we were meant to see them? They’re certainly hard to miss, after all. 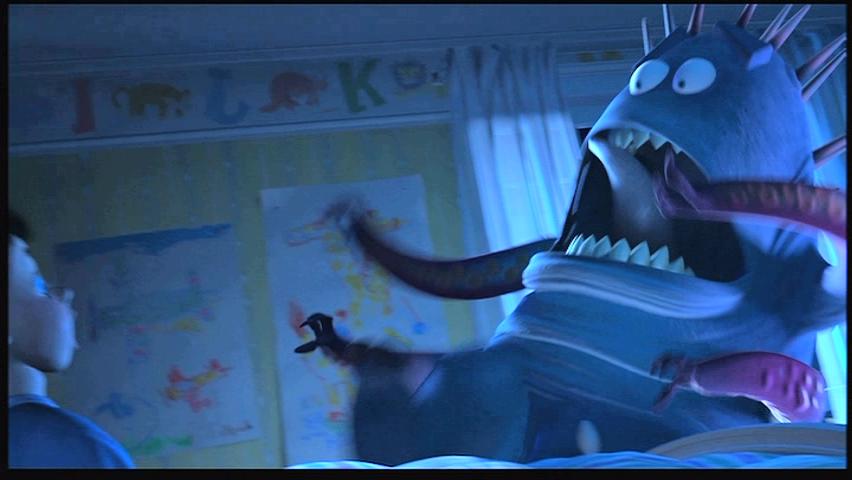 The idea is that the toys moved on their own because the rules of Toy Story bleed into Monsters Inc. Part of any good simulation would be to make sure monsters are prepared for anything that could happen. If toys are able to come alive and possibly protect their sleeping owner from an invader, then it makes perfect sense for these simulations to include these variables.

Without those toys interfering, Mr. Bile probably would have been able to successfully leave the room and escape before the child could get up and go through that door. So part of the simulation could be to move the toys around, like they would in a real situation, in a way that conspires against the monster pulling off a scare. In this case, that meant moving the ball to where he would fall on a bunch of conveniently placed jacks that weren’t there in the first place.

It’s definitely possible, at least. The monsters controlling the simulation are creating atmospheric effects (the curtain moving like wind is blowing it, the child moving around in reaction to realtime events). If toys could move, too, then the monsters could simulate that experience. 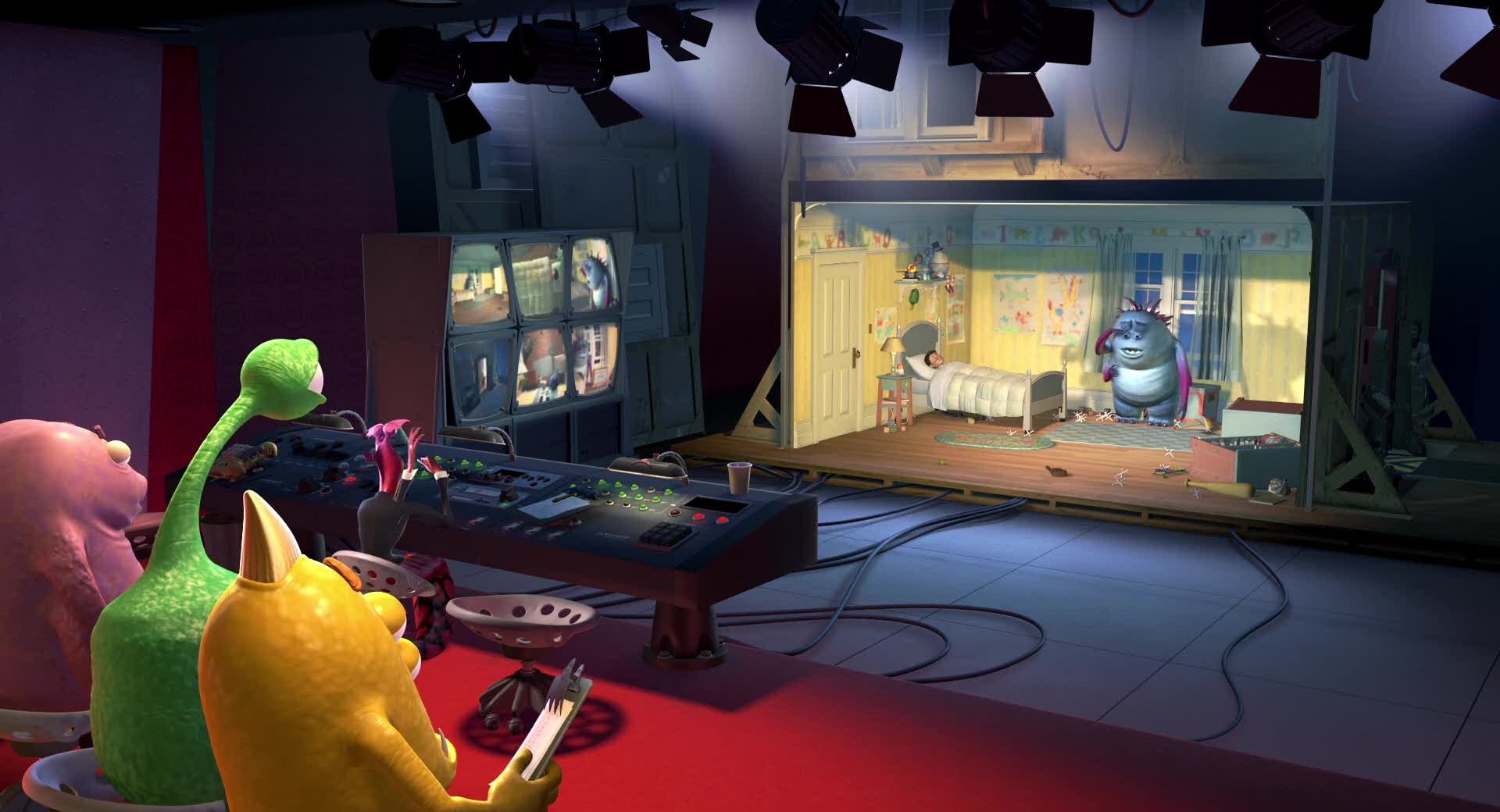 Would toys really do this, though?

I don’t think it’s a stretch based on what we’ve seen in Toy Story. Woody breaks the rules and unites Sid’s toys against him just to get back to Andy. He goes to incredible lengths to make Andy happy, so I’m pretty sure he’d also go pretty far to protect Andy from a terrifying monster.

It might not happen every time with every kid who has toys, but it could happen enough to warrant a response from Monsters Inc. When you watch Monsters University, you see that the higher ups are teaching the monsters tons of useful tips and facts about this profession, ranging from how the doors work to how monsters can adapt to any given situation. 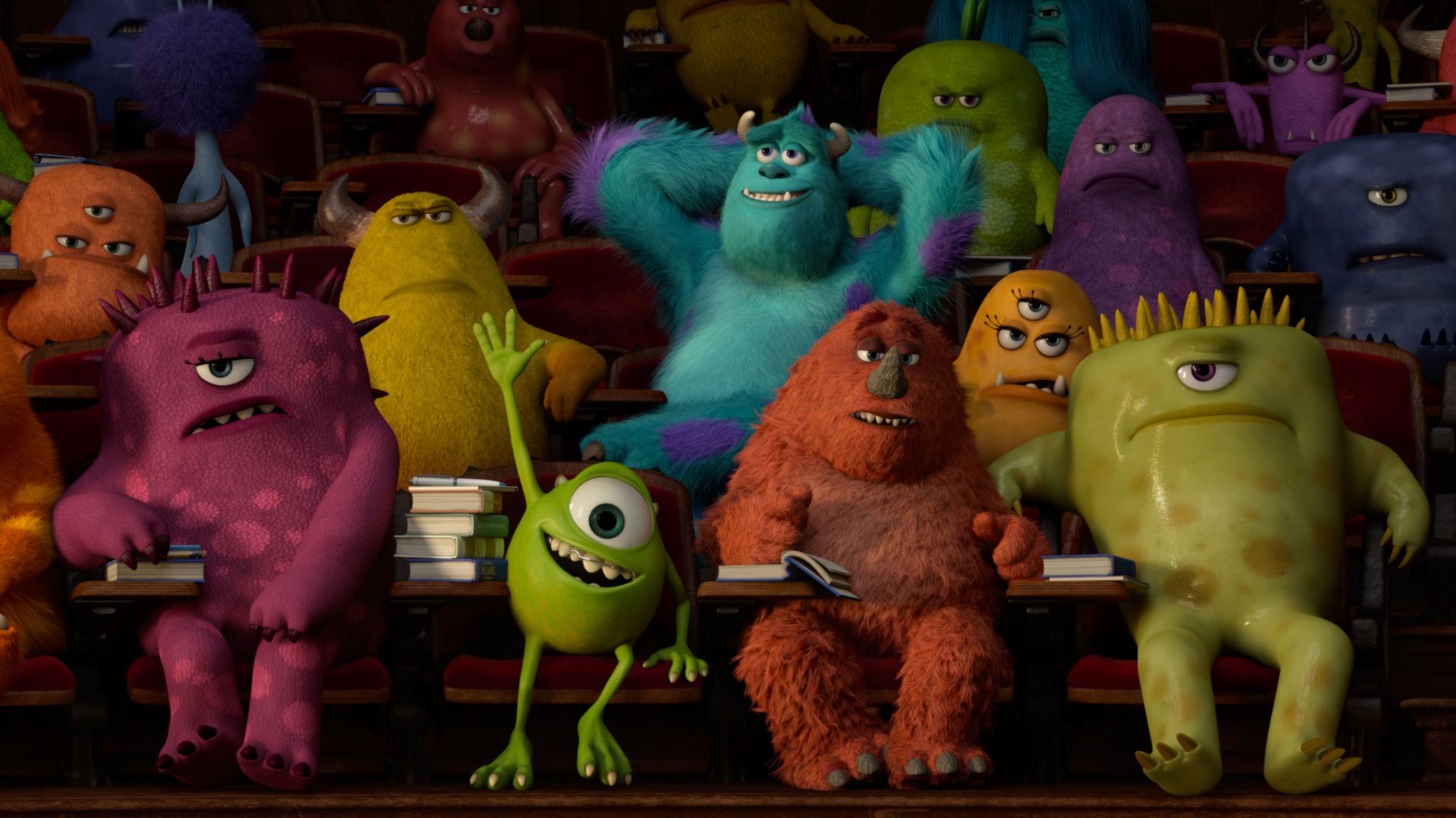 They have to prepare the monsters to be so stealthy, not even the toys know they’re there (which is possible, since we see that the toys do sleep when Woody has that nightmare in the first movie).

This also solves another major inconsistency that was brought on by Monsters University. If monsters have to go to college to get jobs as professional scarers, then why is Mr. Bile having such a hard time? And why is he doing this, anyway, if he has experience and a college education?

Well, if you watch Monsters University again, you probably won’t notice any of these instances of toys getting in the way. And that’s probably because introducing them as a variable is when you get into the expert mode of scaring. This would make scaring so hard for monsters that it wouldn’t be a critical point of the simulator until you actually got the job, explaining why Mr. Bile is sort of talented, but he ends up falling on his face, despite the rigorous standards of professional scaring established by Dean Hardscrabble in MU.

To sum up, I think this evidence is pretty strong, mostly because those goofs I pointed out just seem overwhelmingly obvious. It is possible that the monsters controlling the simulation could be moving the toys around from the control room just to make things harder for Mr. Bile, not because toys are expected to come alive. But that just seems sort of harsh.

Mr. Bile walked into that room and surveyed everything as he was trained. Mixing things up for no good reason in a scenario that wouldn’t possible happen just to make things harder undermines how the monsters are trained in Monsters University. It’s like testing high school students on a different subject with information you never taught them—OK, wait, that happens all the time.

Let me know if you’re convinced or unconvinced and we can hash it out in the comments. If you’re interested in the Pixar Theory (that is, how all the movies may be connected and why) enough to read an entire book about it with all of the clues and arguments I’ve collected over the past few years, don’t forget to check out my book, which is available now in print and as an e-book on Amazon, Barnes and Noble, etc.

47 thoughts on “Were There Self-Aware Toys in ‘Monsters Inc,’ All Along?”