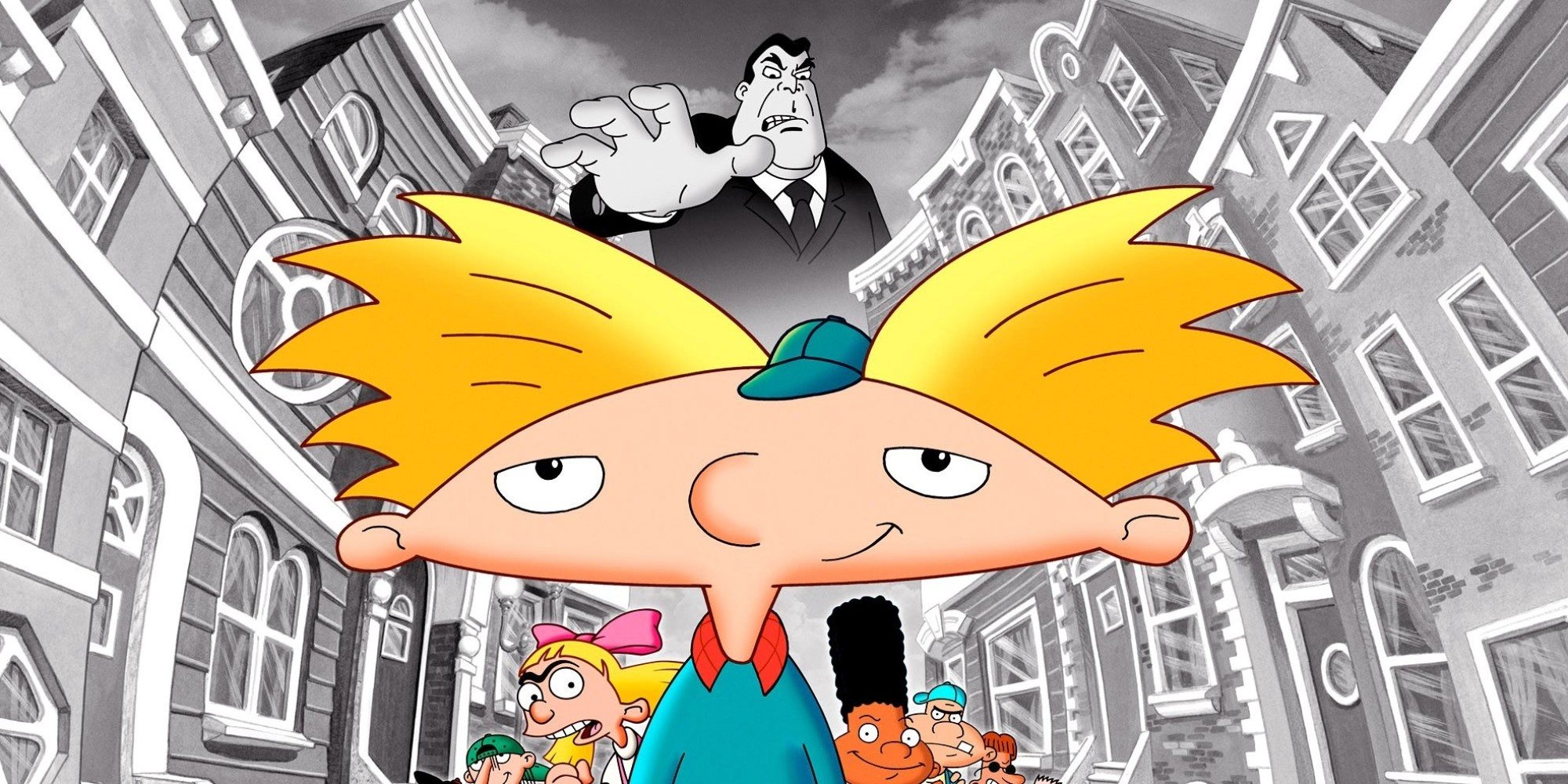 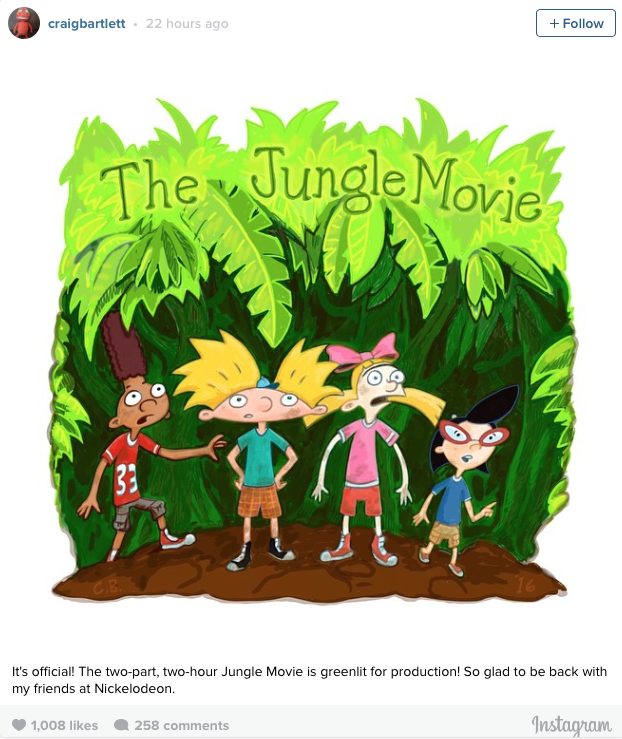 It’s been almost 19 years since the first episode of Hey Arnold premiered on Nickelodeon, and it’s been 11 since the series ended. That’s a lot of time, and yet many people still remember and love this show. There are a lot of reasons for that.

Hey Arnold was created by Craig Bartlett, who wrote Rugrats and married the sister of the guy who created The Simpsons. He even voiced some of the characters. And in many ways, Hey Arnold was and remains unlike any other cartoon on television.

It was about a fourth-grader named Arnold growing up in a fictional (and unnamed within the show, though it’s later called Hillwood) with his friends. The city was a mashup of familiar locations like Seattle, Chicago and New York, but it built its own identity as a believable location without ever needing a label (much like how Arnold himself never needed a last name).

Arnold lived with his grandparents in a grungy boarding house with a couple that fought all the time, an international spy, a hotheaded construction worker, a Vietnam refugee (that Christmas episode, though), and many others. The show put effort into exploring all of these relationships, as well as the lives of Arnold’s close friends at school.

These school kids were such well-developed and interesting characters that the show routinely featured them in their own episodes, some without any hint of Arnold himself. Characters like Harold, Eugene, Sid, Gerald, and even Stinky all had well-written episodes devoted to them. It’s hard to think of any other show on any network that his such a big catalogue of characters with rich backstories.

But much of the show’s success and impact is due to how comfortable the show was with exploring the lives of the girls at this school, not just the boys. Rhonda, Phoebe, and of course, Helga, all had many episodes of their own, despite Hey Arnold being originally conceived as a show for young boys.

For this reason, everyone had a reason to like Hey Arnold. If you didn’t really care for Eugene’s accident prone problems, you could always wait for the next episode about Rhonda learning humility and having to wear glasses. Or watch Arnold befriend a man who can fly with pigeons in one of the most surreal, yet metaphysically enthralling, episodes it ever made.

Hey Arnold is, without a doubt, a unique show that deserves all of the nostalgic praise it gets. But how did it end?

The show was famous for raising lots of questions without ever paying off the answers. While some mysteries, like Arnold’s last name, were never revealed, other curious story arcs developed slowly over time, like the origin of Arnold’s parents and whether or not Helga would ever tell Arnold how she feels.

It wasn’t until years into the series that the episode, “Parents Day” finally gave viewers an answer to where Arnold came from and what happened to his parents, Miles and Stella. We found out that they were wilderness explorers who traveled the world like Indiana Jones and Lara Croft (Stella even wore a shirt right out of Tomb Raider).

But some time after Arnold was born, they vanished during an expedition to San Lorenzo, leaving their baby in the hands of his grandparents.

Years later, the series offered even more insight into what specifically happened to Arnold’s parents in the last episode that was ever produced (though more episodes were later released that happen before “The Journal”). 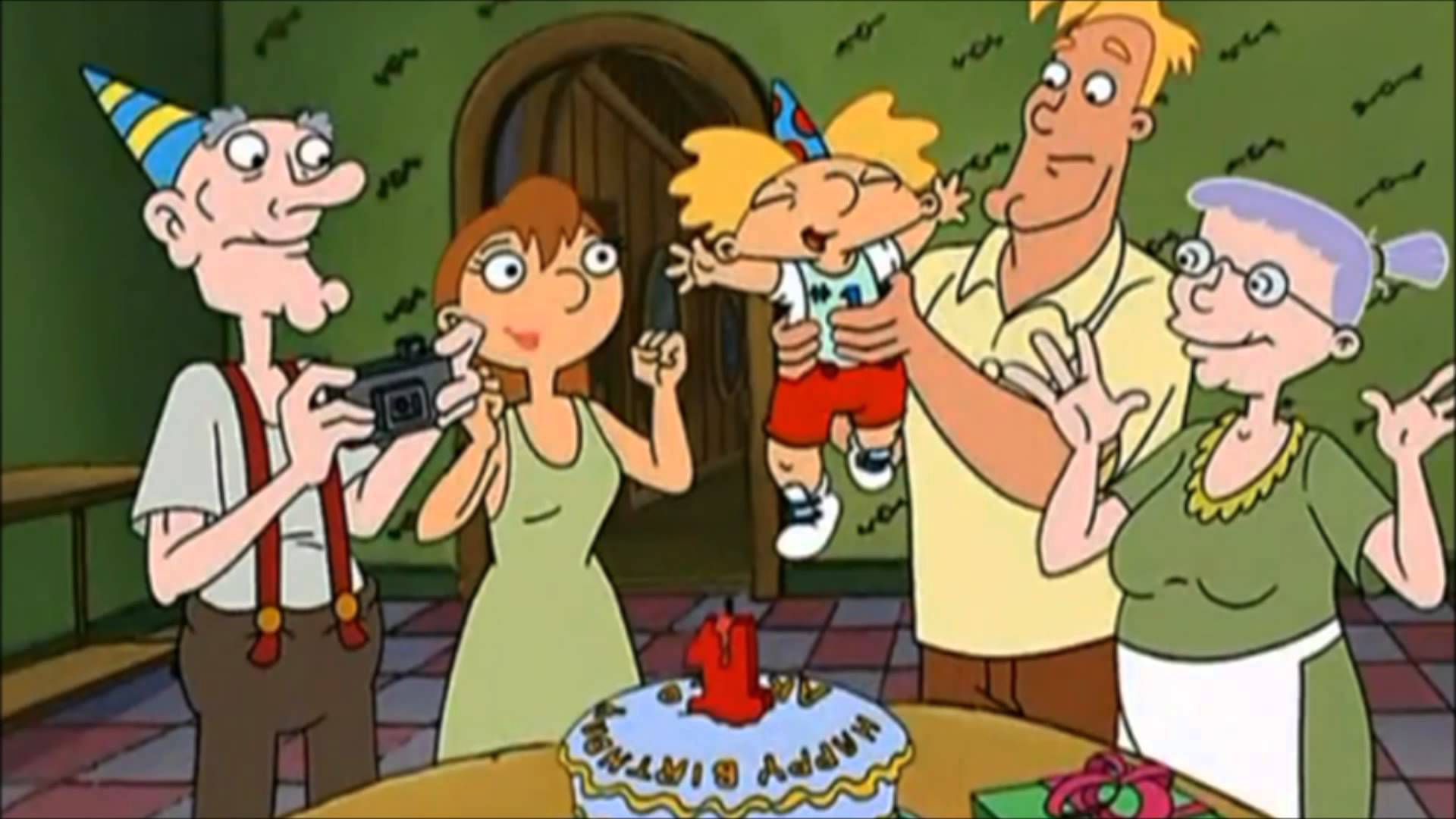 Arnold found his father’s journal, which revealed a lot about his parents’ adventures. He learned that they journeyed back to San Lorenzo (where Arnold was born to help a mysterious tribe known as the “Green Eyed People,” whom they had befriended years earlier. Stella was a doctor, and the Green Eyed People had been stricken by a disease. Since Stella and Miles were the only people they trusted, the parents had to leave Arnold and go save them.

They never returned, of course, but Arnold found a map in the back of the journal. The series actually ended with Arnold telling this to his grandparents, implying that the story was not over. Nickelodeon was going to produce a movie called Hey Arnold!: The Jungle Movie to finish the series, but they ended up making Hey Arnold!: The Movie instead, which was based on the planned TV special, Arnold Saves the Neighborhood.

The movie made a lot of money, but fans weren’t very pleased.

Nickelodeon was planning on making another theatrical release for “Jungle Movie” despite the unsuccessful first attempt, which is why they produced “The Journal” to set it up. But disagreements between Bartlett and Nickelodeon caused the complete end of the series, including the movie.

Basically, Nickelodeon demanded that Bartlett only create shows for their network, but he refused because he was working on a series for Cartoon Network.

As a result, Hey Arnold and its finale movie were cancelled.

For the longest time, I thought this was a sign of a theory I had about Arnold and his grandparents. Basically, I just assumed that none of these things about Arnold’s parents were true because they were so fantastical. They reminded me of the dream sequences Arnold would have in the first season, which positioned him as a more imaginative kid.

So when “The Journal” came out, I started to think that Arnold’s grandparents had planted that journal and even the photos. And I believed that they invented the story to make Arnold feel better about his parents abandoning him or passing away tragically.

But this theory is false. Bartlett was clearly working on a movie that debunks that, as we have ample concept art and plot lines that have been leaked over the years. There was no “hidden story” here for us to bother discussing.

Over the years, fans have clamored for Bartlett and Nickelodeon to revive the movie and finish the series strong. Despite rumors since 2012  that this could happen, no one has said anything official, which means it will likely never happen, and that’s not surprising.

In Nickelodeon’s defense, they’d be spending a lot of money to do a movie that most of its current audience wouldn’t have any previous knowledge of. At this point, only millennials like me remember this show, and many of us are too old to spend money on a Hey Arnold movie (besides me and probably anyone reading this).

We’ll probably never know what happened to Arnold’s parents, but there is one other massive plot thread that did get confirmed, and it’s sort of depressing. Unfortunately, Helga and Arnold never end up together.

Remember All Grown Up? The Rugrats spinoff that aged the characters and followed their lives as preteens and basically ruined Nickelodeon’s flagship series after two surprisingly decent seasons?

Well, the same thing was planned for Hey Arnold, but without Arnold. It was centered around Helga as a teenager at age 15, and it was simply called The Patakis. A fun surprise is that the show was deemed too dark for Nickelodeon, so it was planned to debut on MTV. Sadly, it never got off the ground.

The kicker is that in this spinoff, Helga has somewhat moved on from Arnold. For unexplained reasons, Arnold moves away from the city (maybe to live with his parents in San Lorenzo), so The Patakis would have focused only on Helga and some of the other characters from P.S. 118.

We don’t know much about the show, but Bartlett and other sources have given us small peeks at what could have been. Helga and Arnold apparently dated for a while, but they broke up. She’s still crazy about him when the show starts, and she writes him letters every night that she’s too scared to actually send. Her new “Arnold shrine” is now a binder with all of these letters.

Seriously, imagine how seriously interesting it would have been to watch an older Helga move on from Arnold and find something else in her life to hold onto, besides the unrequited love of a kid who showed her love at the lowest point in her life. It would have done wonders for this character.

This “updated” Helga wants to write books and still has that grumpy edge to her. She still has the unibrow (thankfully) and even the classic pink bow under her cap. The pilot is about how Olga has become the black sheep of the family in pursuit of an acting career. Her father, Big Bob, is selling cell phones now instead of beepers, and Miriam is in AA (apparently our suspicions were correct in assuming there was another ingredient in those “smoothies”).

Other Hey Arnold characters were planned to be in the show, including Gerald and Phoebe as a stable couple, Sid, Stinky, and even Brainy.

Like Legend of Korra, this series could have been a fresh start built from the legacy of a previous series. In fact, I could still see the series happening since it wouldn’t necessarily have to rely on fans of the original show to fuel it. Just look at how other nostalgic favorites like Boy Meets World and Full House are being revived on Disney and Netflix.

So perhaps one day we will get the answers Bartlett has been keeping from us likely for the sake of his own sanity. In a world where Kickstarter and social media campaigns dictate the next craze derived from our unwillingness to let go of our respective childhoods, The Patakis is more than a safe bet.

After all, if Generation X gets to see Transformers turn into four incredibly mediocre movies, then why can’t we get just a season of our favorite football head? Or at least his girlfriend.