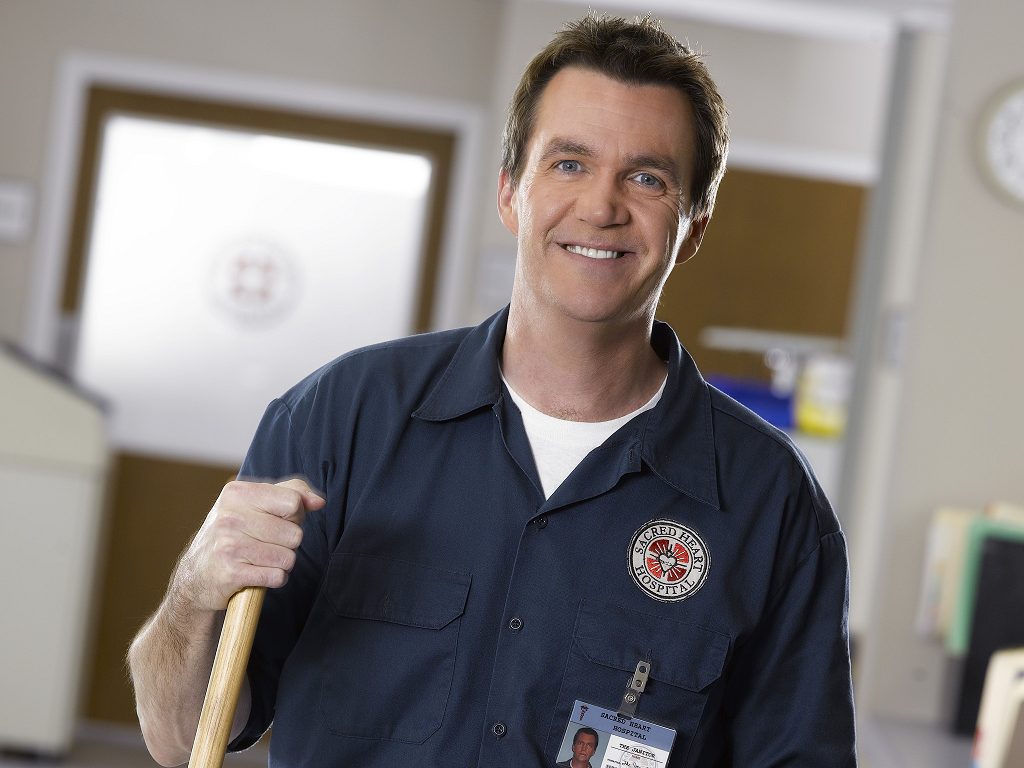 Scrubs is one of my favorite shows of all time. During college, I watched every season on repeat until I saw every episode at least 100 times. And that was before the days of Netflix.

Even though my Scrubs bingeing is extremely economical now thanks to the advent of streaming, I still revisit those old DVDs on occasion and jump back into the lives of John “J.D.” Dorian and his lifetime friends at Sacred Heart Hospital. I even watch Season 9 when I’m in the right mood.

So you’d think that after all this time, I’d have some sort of mind-blowing fan theory or revelation naturally generated from my obsession, but it’s quite the opposite. The show manages to be pretty airtight on its themes and messages, mostly because we spend most of our time inside J.D.’s head. There’s little left to the imagination.

But there do happen to be longstanding questions that Scrubs has never truly resolved, except they have, actually. There’s the matter of the Janitor, who you may recognize as Mike from ABC’s “The Middle.” He’s an enigma throughout the series, to the point where the writers initially intended for him to be a figment of J.D.’s imagination (they changed their mind by Season 2).

Yeah, he gets married and finds meaning in his life or something. But we never really find out his name. Throughout the series, he’s only referred to as “The Janitor,” and the mystery behind his name becomes a running gag all the way through the Season 8 finale. He finally reveals his name to J.D. as “Glen Matthews” in the finale. 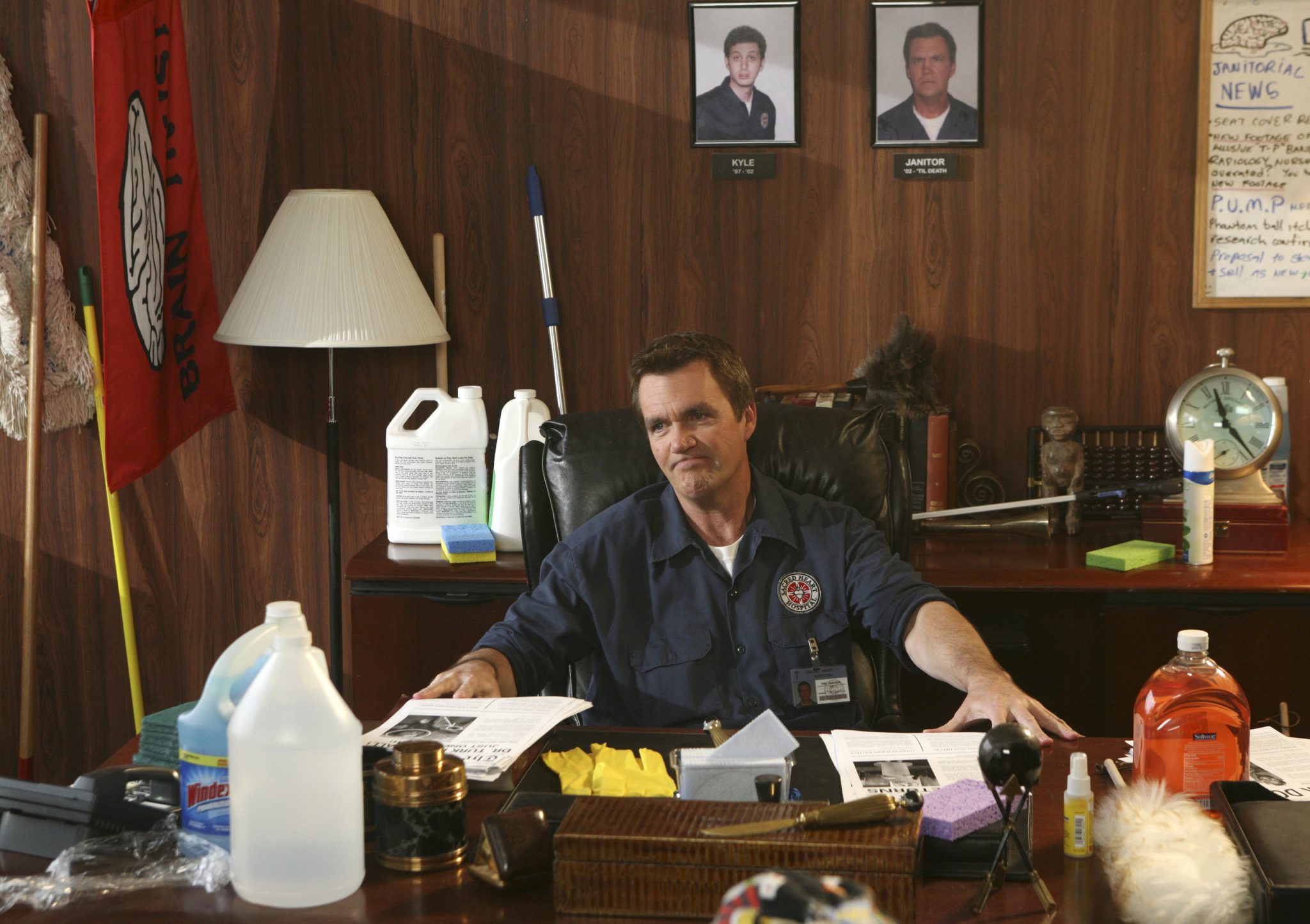 Right after he reveals his name, Janitor is referred to as “Tommy” by an orderly. This implies that he was lying to J.D., which isn’t a stretch at all because that’s what the Janitor does. He consistently fabricates stories and facts about his life that are blatantly false and reveal his pathological lying.

So what is the Janitor’s name? Does he have one?

The answer is yes, and it’s depressingly simple, really. In “My Friend the Doctor” (S3E8),  J.D. finds out that the Janitor played a character in the real-life movie, The Fugitive (you know, the Harrison Ford movie from the 90s).

This information alone lets us know that the Janitor’s real name must correspond with the actor who played his character in The Fugitive. So his name is Neil Flynn, the actual name of the actor who portrays him. 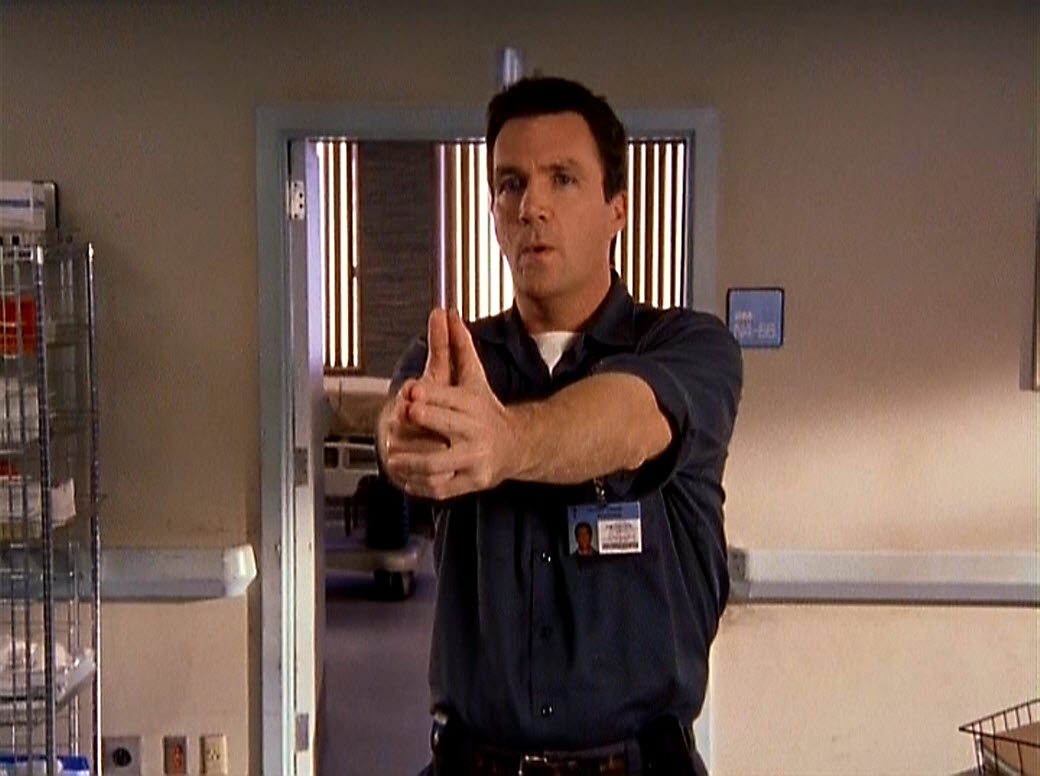 Look, I’m certainly not the first person to pick up on all this. Scrubs fans have been assuming the Janitor is Neil Flynn for over a decade. That’s why Bill Lawrence, the creator of Scrubs, took to Facebook and Twitter to decry those theories and say the following:

What does this mean? How is his name Glen, if his name is Neil in The Fugitive?

One argument is that he lied about his name to the casting director in the movie, so his real name ISN’T Neil Flynn after all. It really is Glen.

Bill Lawrence want us to believe that the Janitor told J.D. the truth (for once). This is because the episode “My Finale” was meant to be the series finale, so it would make sense for the Janitor to close this chapter with one final moment of honesty.

There’s just one problem. The Janitor reveals one episode later that he never really thought J.D. was leaving. Scrubs was revamped into a semi-spinoff for Season 9 that focused mainly on a med school built for Sacred Heart, and J.D. only showed up for a few episodes.

In the first episode, Turk reveals to J.D. that the Janitor didn’t really think J.D. had left. Of course, Turk has to insist that J.D. is really gone, which causes the Janitor to hand him his mop and leave Sacred Heart…forever. No one there saw or heard from the Janitor again.

If the Janitor thought J.D. was really coming back, then why would he tell the doctor his name? Because of Season 9, I have to conclude that Lawrence lied to us, Janitor-style.

So is his name Neil Flynn? Let’s revisit 2009 for a second. Season 9 of Scrubs got started in December. And another show got started that fall. The pilot episode of The Middle premiered on ABC, starring…Neil Flynn.

What if the whole point of that first scene in Season 9 was to point us to the potential fact that The Middle stars the Janitor, who happens to be Neil Flynn. And that’s why he disappeared from the show altogether, instead of following J.D. to his new job. He revisited his acting career to portray a guy who has everything the Janitor wanted throughout the series: a family in the Midwest. 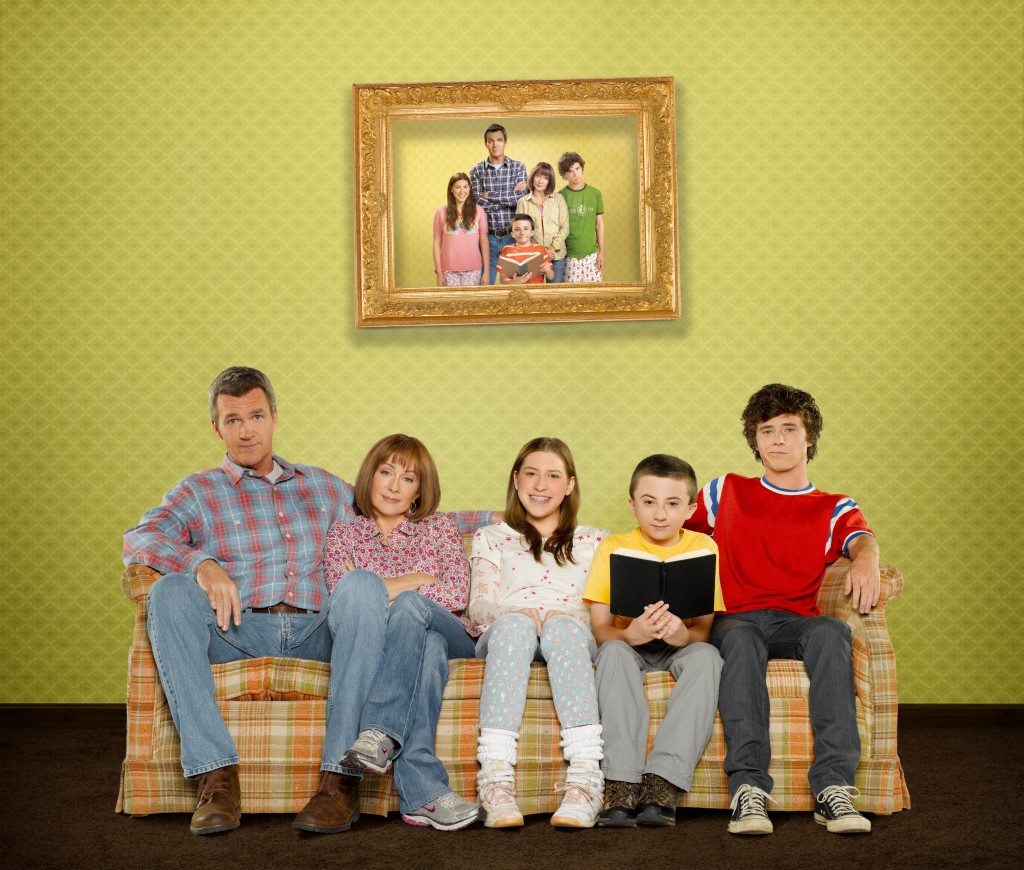 In the episode, “My Own Worst Enemy,” the Janitor reveals that his obsession with J.D. has prevented him from doing what he really wants to do: start a family. The day after J.D. leaves, the Janitor does too and finally pursues that dream. A year later, he’s on ABC starring as the loving father of a humble family. After all, the Janitor loves to lie. Becoming an actor is the perfect job for someone who likes to make up stories.

Don’t bother trying to tell me that’s not the case, Bill Lawrence.

And hey, if you don’t believe me and think this article is a waste of time, then don’t worry. Here’s a chart showing every girl name Dr. Cox called J.D. categorized by season:

20 thoughts on “The True Name of the Janitor From ‘Scrubs’”