I love it when Marvel creates new and interesting female characters that represent a twist in established universes. In recent years, they’ve written some incredible stories with these new superheroes (and villains).

And this year, Marvel announced an all-star team up of heroines led by She-Hulk. The core lineup consists  of Dazzler, Medusa, Singularity, and Nico Minoru. Though there are plenty more Marvel favorites that will make appearances, as you can see from the cover below. 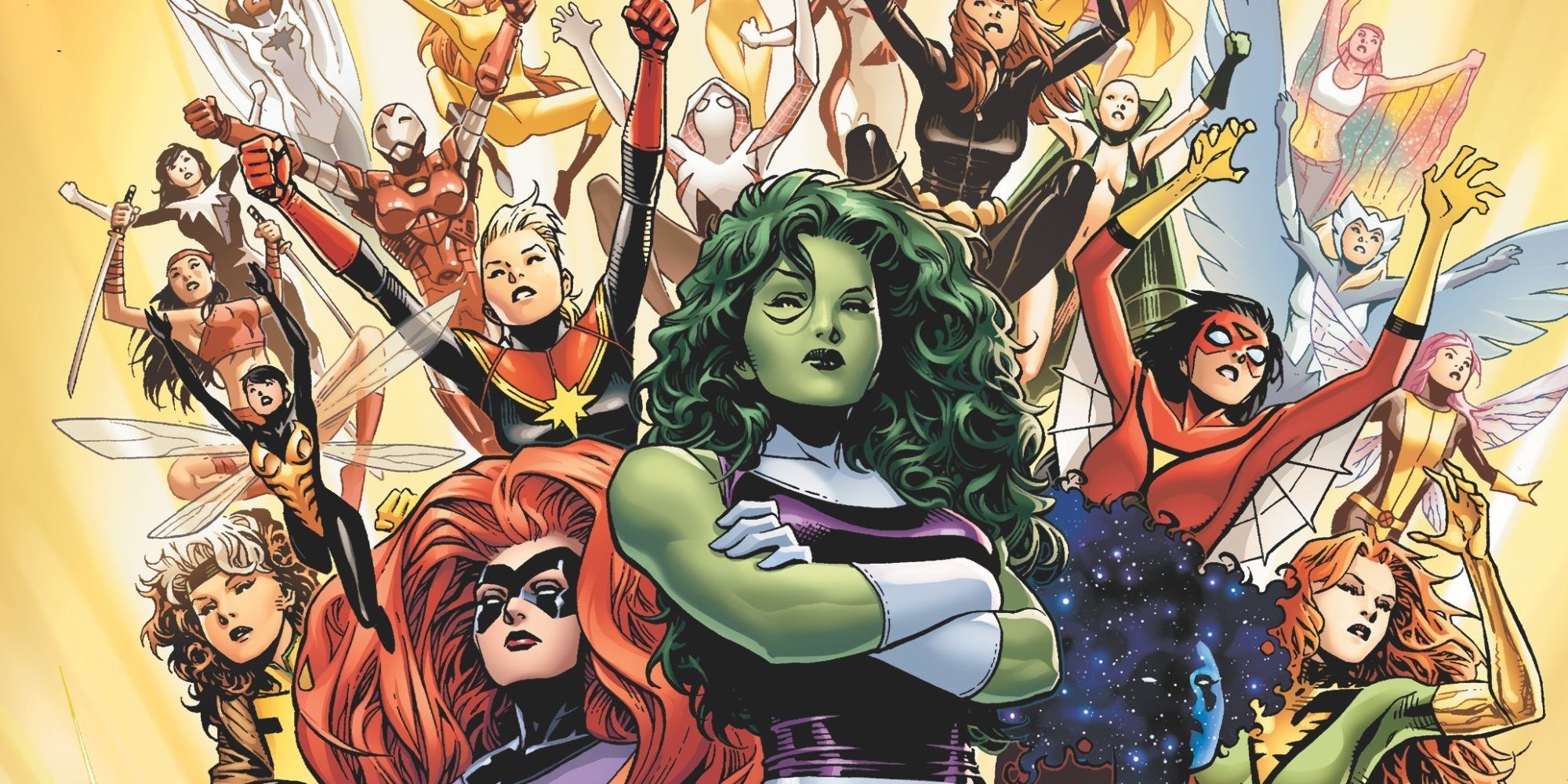 Now, I’m a big fan of Teen Titans, the D.C. storylines surrounding the younger counterparts to bigger heroes. I’m not a comic-book writer, and I don’t want to be constrained to the Marvel Cinematic Universe. So I propose a killer animated TV series that puts “Teen Titans Go” to shame. I would call it, Teen Avengers.

This new lineup would have to be a shakeup of relatively new characters and new twists on older characters. I would take tremendous liberties with the source material to make it happen, but I think you’ll like the end result if you open your mind. So here’s my dream lineup without context: 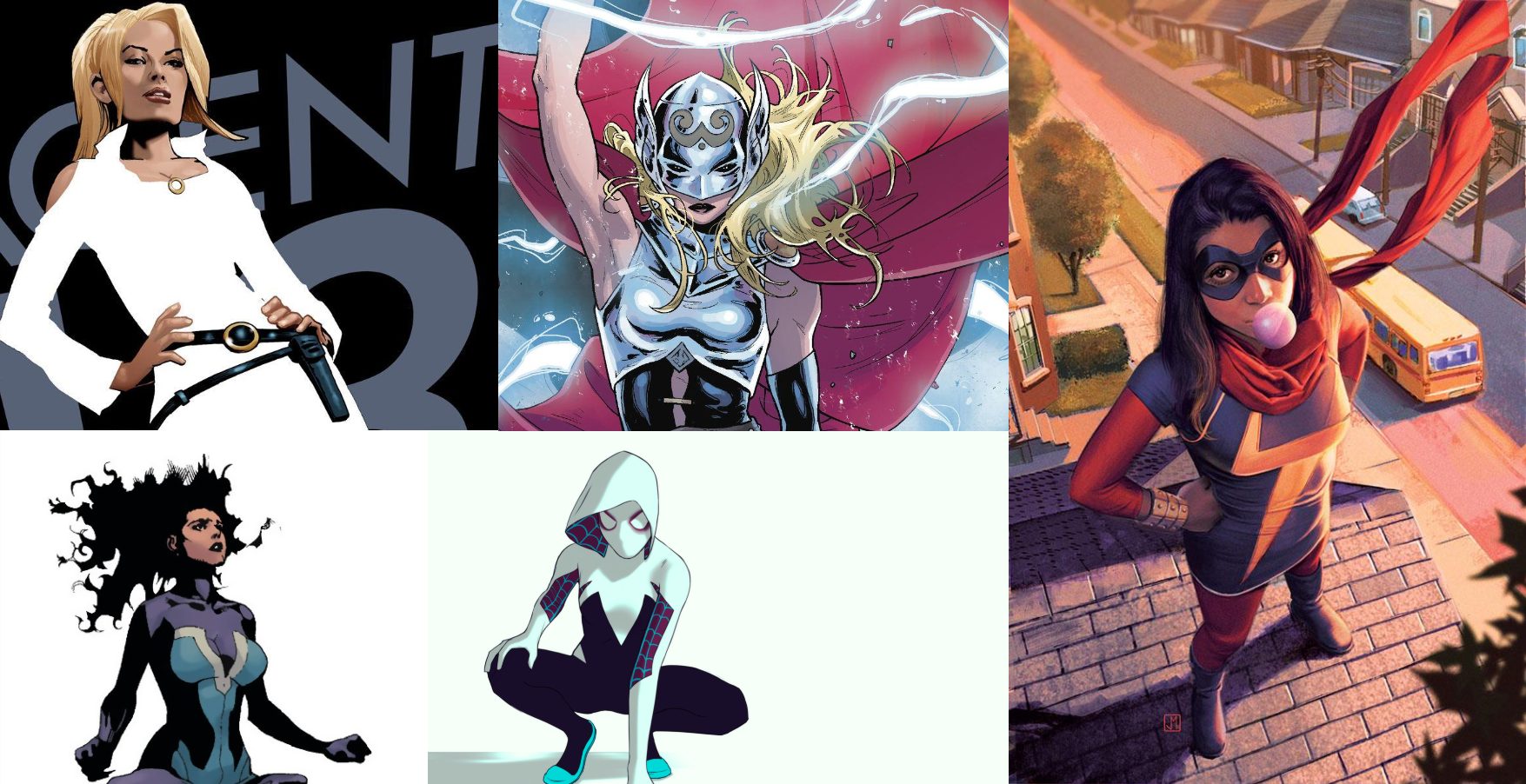 OK, let’s get the context started.

In order for this team to make sense, I have to walk you through the actual story I have in mind. Don’t worry, we’ll just stick with the cliff notes, though keep in mind that this would be an alternate reality in which everyone’s age would be younger than what’s established.

The series would open on Mars, and we’d be introduced to Abyss and her brother Ex Nihilo. An “Aleph” has helped them terraform Mars into a hospitable planet as their guide. They’re members of The Garden, a group of creation avatars that go to worlds and “plant seeds” to make them better worlds. Those “seeds” usually result in planets being completely wiped out, and The Garden now has Earth in its sights.

Abyss and Ex Nihilo have unique powers in the comics. Abyss has mind manipulation, while Ex Nihilo is more of a powerhouse. Their plan is to terraform Earth by wiping out its inhabitants. The image above shows you a pretty good snapshot of their motivations.

In the next scene, we see a teenage girl typing on a computer in New Jersey. She’s Kamala Khan, who will eventually become Ms. Marvel. She writes fan fiction about the Avengers and is a huge fan of this world’s Captain Marvel (Carol Danvers). 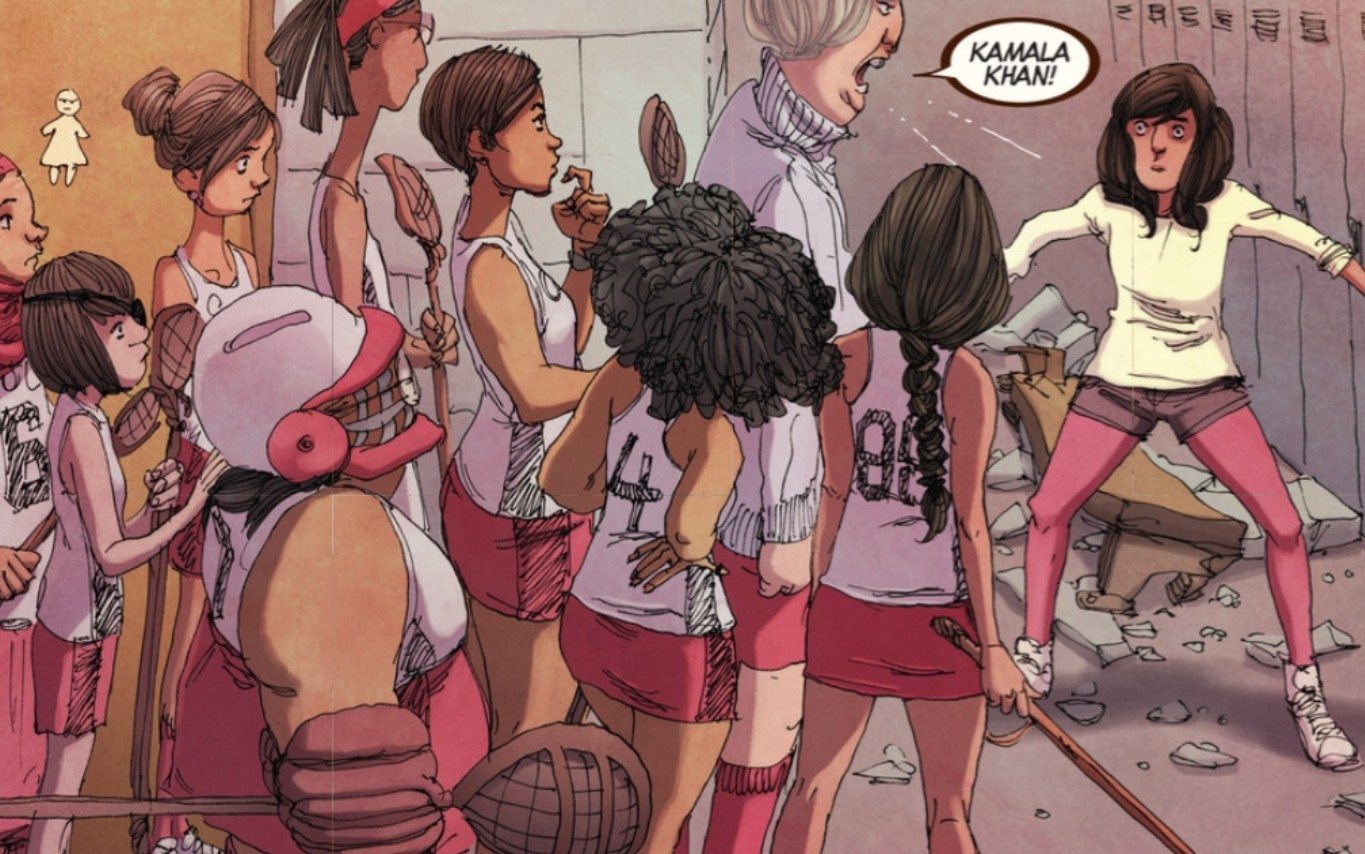 Kamala goes to a party and tries to fit in, but she has a panic attack after coming in contact with a strange boy. He follows her home and reveals that he is Alaris, an Inhuman in disguise. He tells Kamala that she’s a descendant of the Inhumans, and she passes out in shock.

She dreams of Captain Marvel, who asks her, “Who do you want to be?” Kamala replies, “I want to be you.” She awakens with strange powers and is unable to control them.

We’d then shift to the S.H.I.E.L.D. Helicarrier, where Sharon Carter (niece of Peggy Carter from Captain America and Agent Carter) is working. They’re flying over New Jersey, where Inhuman activity has been detected. Sharon is in her late teens at this point, so she wants to prove herself to the director, Maria Hill. So she leaves the Helicarrier alone and uses her sleuth skills to find the Inhuman without starting a fight. 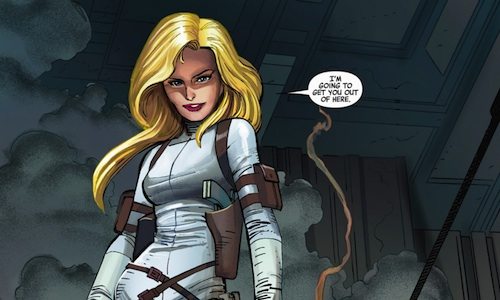 Meanwhile, Abyss and Ex Nihilo have nearly arrived on Earth. Ex Nihilo tells Abyss that their plan will be to transform creatures into better creatures, starting with the most troubled. He points to a person in New Jersey who is struggling to control her powers. Abyss reluctantly agrees to pursue this,  though she regards in how beautiful the planet already is. 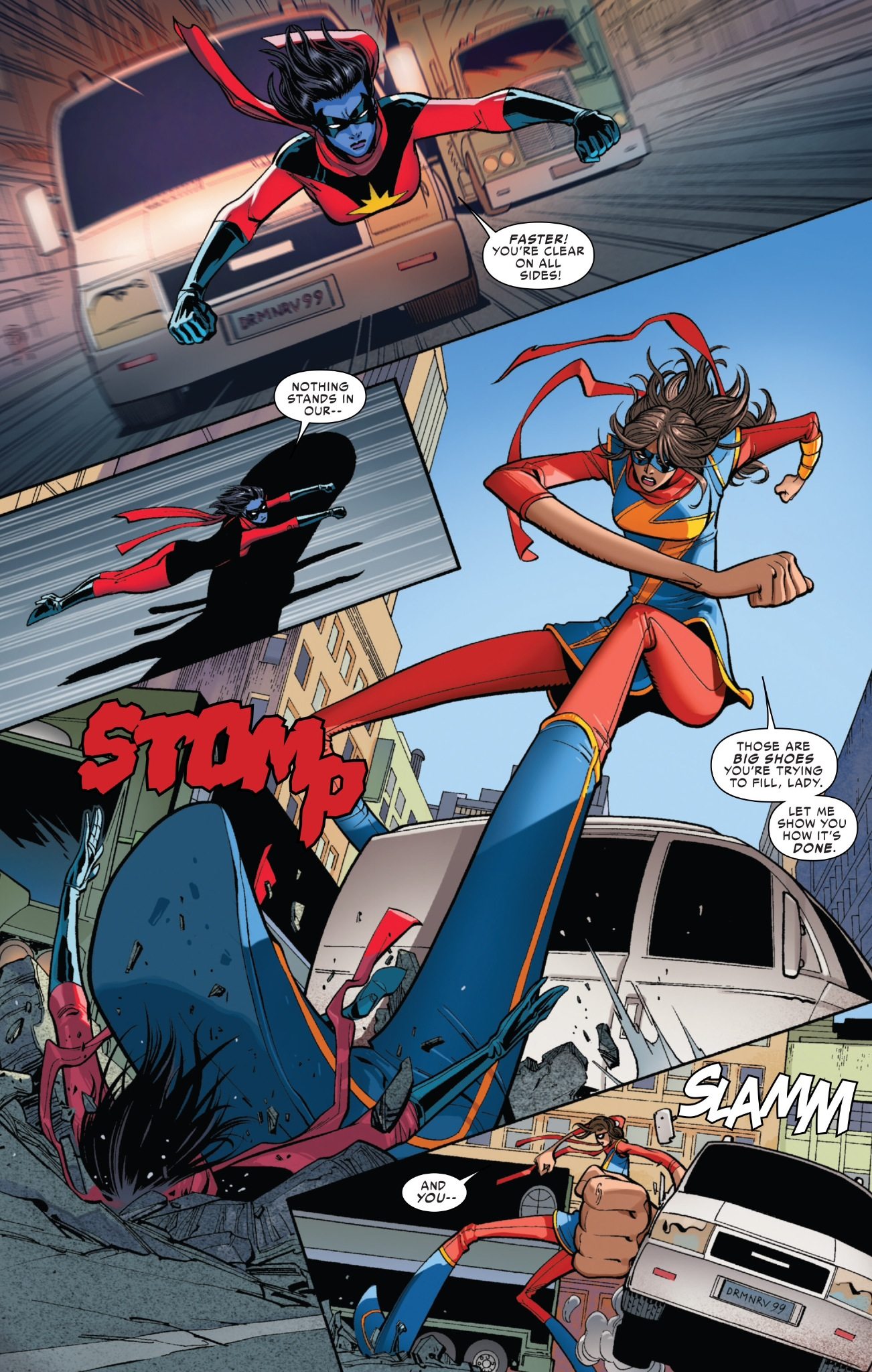 In New Jersey, Kamala tries to go through her day, but her powers are becoming more chaotic. Finally, she accidentally causes a car accident and her fists enlarge. Everywhere Kamala goes, she makes a mess, and now police are trying to subdue her. Of course, their bullets don’t work.

Sharon Carter arrives, unarmed, and tries to calm Kamala down. It almost works, as Kamala tells Gwen her name and they connect for a second, until someone swoops in and covers Kamala in webbing.

A girl in a white costume comes in and complains she had to come here all the way from Queens. It’s Spider-Gwen, the alternate version of Spider-Man, in which Gwen Stacey is bit by a radioactive spider instead of Peter Parker. 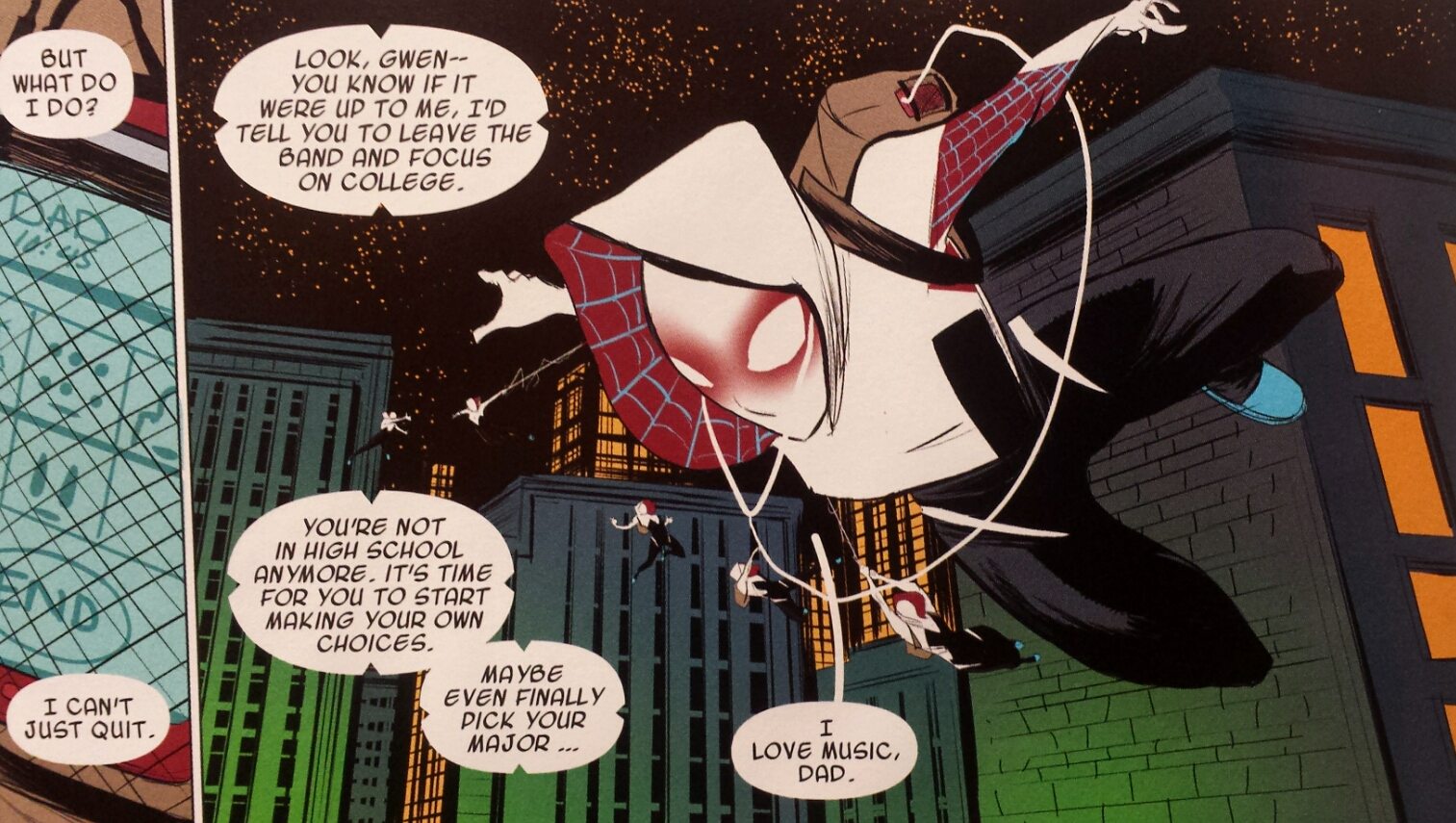 A battle ensues, and it’s somewhat an even match. Sharon keeps trying to stop the fighting, but Kamala feels too threatened to back down. Finally, Abyss and Ex Nihilo arrive. Ex Nihilo defeats all of them easily and takes Kamala with him, despite Abyss’s please that she’s just a kid.

S.H.I.E.L.D. arrives and takes Gwen into custody, while Sharon tries to explain herself. On the Helicarrier, Sharon tries to explain to Maria Hill and the rest of command what happened, but none of them know who these strange creatures are that took Kamala. Sharon brings up the nature of Ex Nihilo’s divine powers, which convinces Maria to “make a call.”

Later, Sharon meets with Spider-Gwen, who is being held for questioning. She asks Gwen who she is and where she got her powers, but Gwen’s not interesting in sharing any origin stories. She just wants to get out of there and save Kamala, now realizing she was wrong to be so aggressive. Sharon tells them to let Gwen free so Maria and decide what to do with her, and then the entire ship quakes. Something has arrived on the hull. 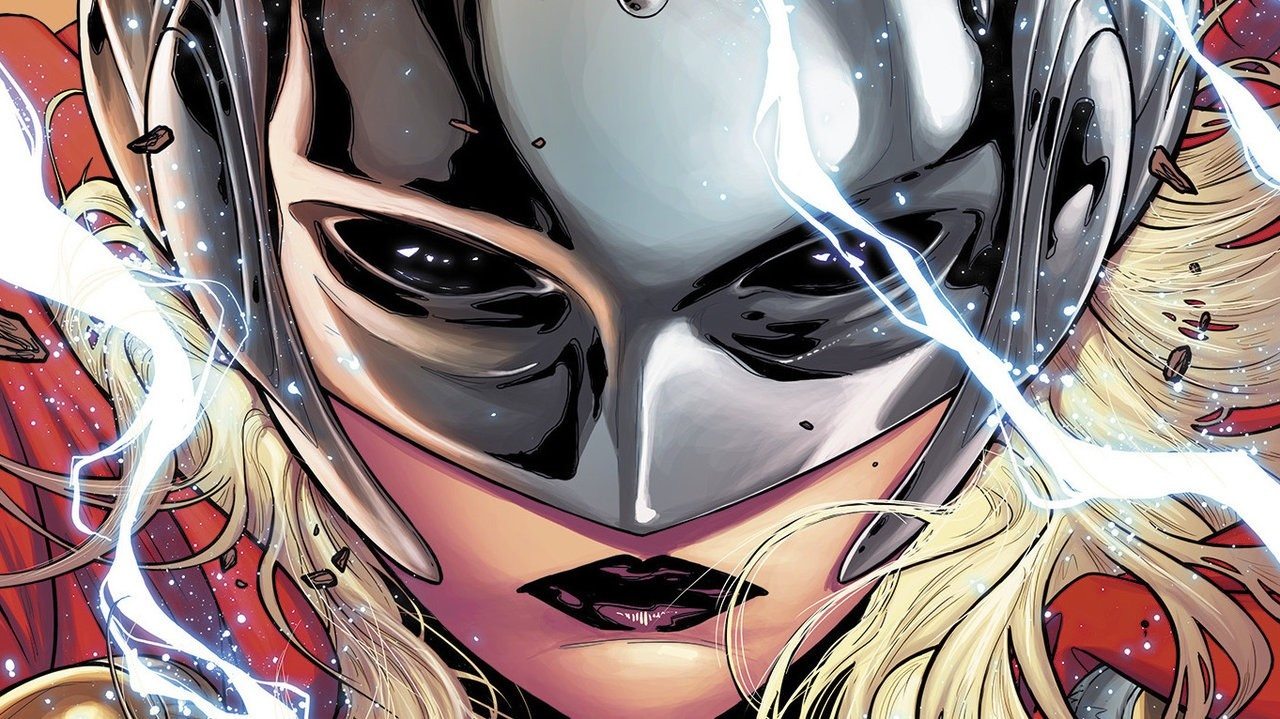 They go to the top to find an Asgardian getting to her feet. It’s Thor (the female version whose identity is a secret for now). Maria Hill called her to assist with this situation. They explain that Abyss and Ex Nihilo are from The Garden, powerful creatures who wipe out worlds to make them better. Asgard rules that Midgard (Earth) is under their protection from The Garden, and Thor has been sent to solve the matter.

I could keep going, but you see where this is going, right? Abyss will ultimately betray her brother, Ex Nihilo and help Gwen, Thor, Kamala, and Sharon defeat him. Stopping The Garden ties each character together in their own S.H.I.E.L.D. sanctioned team up, which would make Sharon Carter their leader.

My reasoning behind each character’s inclusion is pretty simple. They all bring something different to the table, and they each represent core universes in Marvel pantheon, with the sad exception of Iron Man and Hulk’s worlds. But that could be remedied. 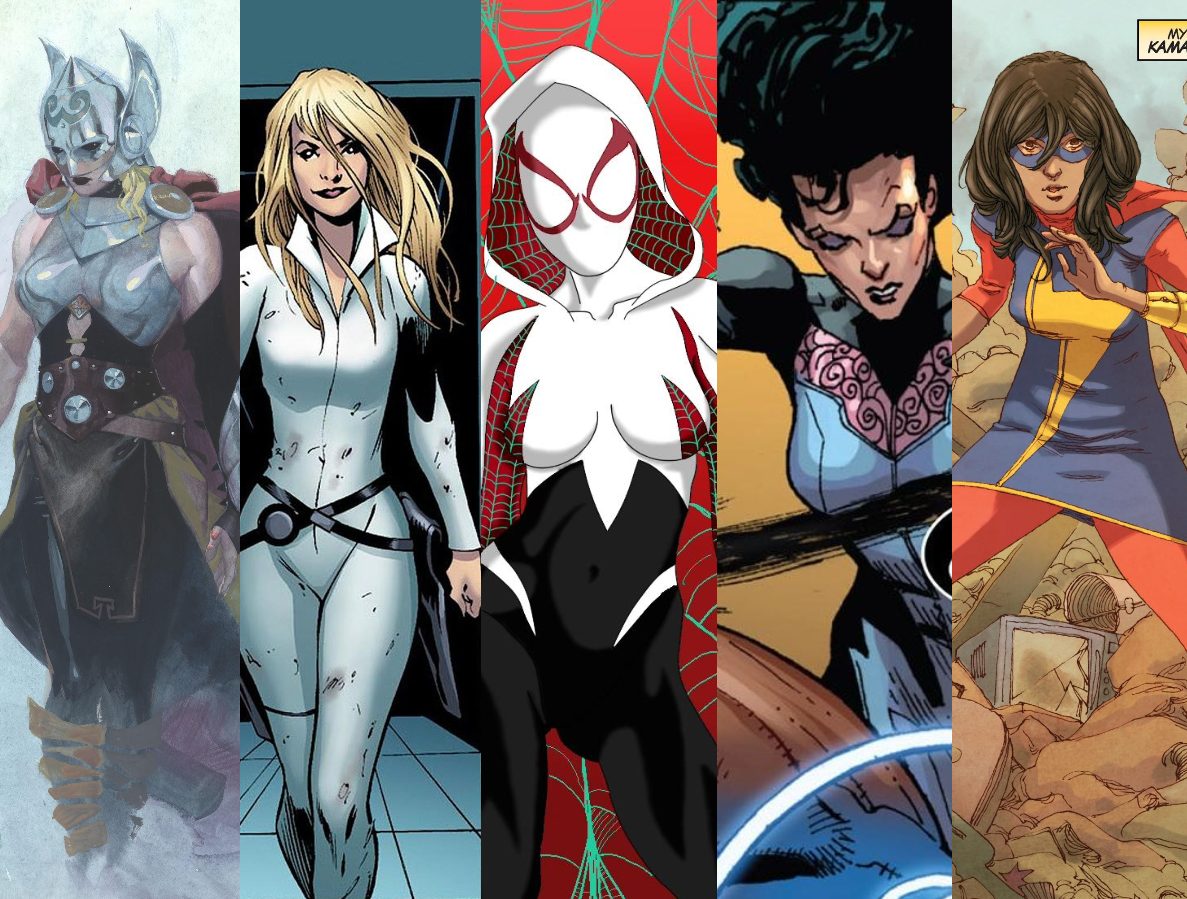 Sharon Carter represents the justice and strong leadership of Captain America, though not in name. Thor is the walking Deus Ex Machina. Spider-Woman (or Silk if we want to be liberal with the source material) is the quirky science whiz with tons of potential. Abyss is the former villain that people aren’t as familiar with, making her role dynamic over time. And Ms. Marvel is the wildcard. She represents us trying to figure this new world out that we’ve just been introduced to. She is, after all, a super fan writing fan fiction.

What do you think of my story idea? Send me your questions, comments, corrections, and suggestions!

17 thoughts on “If Marvel Makes a Female ‘Teen Titans,’ This Should Be The Epic Lineup”