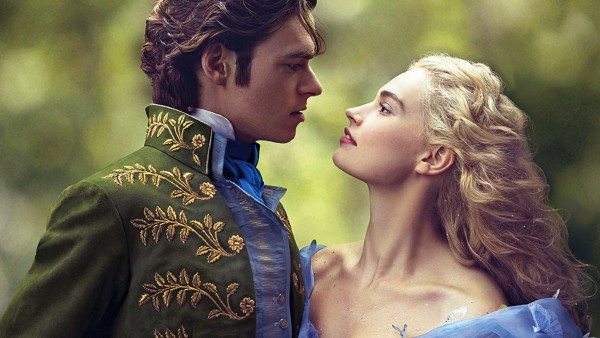 I could leave it at that, but I’ll also add that if you’ve seen  Ever After: A Cinderella Story with Drew Barrymore from 1998, then you’ve seen the entire movie.

This new live-action retelling of the fairy tale classic combines the beauty and magical whimsy of the classical animated film with the sincerity and fleshed out character development of Ever After. Oddly enough, 2015’s Cinderella surpasses neither of these movies.

It plays it safe and matches the original fairy tale formula to the letter. Nothing more, nothing less. It’s not funny, though it manages to be charming thanks to beautiful sets, inspired musical scores, and Cate Blanchett as the wicked stepmother working as an acceptable counter balance to the fresh face of Lily James (no Harry Potter jokes, please). Even Helena Bonham Carter finds a way to fit her own flavor into this mostly vapid retelling.

Everything else is sadly forgettable, but that won’t prevent Cinderella from pleasing its many fans. I just wish it could have tried a little bit harder to be a little bit more.

Cinderella mostly excels at costume design and more in-depth imaginings of crucial characters, namely the prince. No longer a side character, there’s a real story now behind who Prince Charming is and why he’s so desperate for a life love. His first meeting with Cinderella is now outside of the ball, and under more humble circumstances. This time, she’s the one who doesn’t quite know what to make of the Prince, and that’s a fun change to the original story.

There’s less focus on the misadventures of the animals, but there’s a surprisingly odd amount of anti-feminism present in Cinderella herself. Unlike previous adaptations where she at least tried to escape the clutches of her evil Stepmother, this incarnation is content to just wait for someone to rescue her. It’s a strange decision for a movie that otherwise tries harder to feel more updated.

But in the end, this is the cut and dry Cinderella story with more detail, style, and story. It’s just a shame they forgot to infuse the little substance this movie has with some classic Disney whimsy.