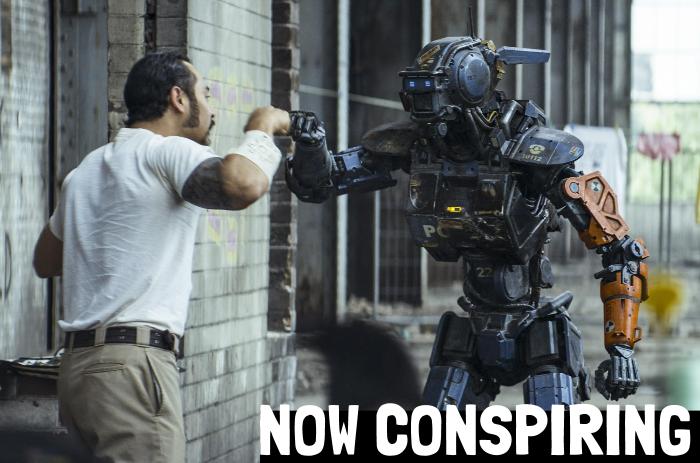 Hey conspirers, this week things had to go a little differently for the show. Due to our busy schedules, the podcast crew was unable to get together, so I’ll be flying solo for today’s short, but hopefully sweet, episode.

You’ll notice right away the audio is a little awkward toward the beginning. Apologies…I wasn’t able to use a microphone, and other excuses happened (but it gets better).

As the title implies, I delve into a review for Chappie that tries to explain the bizarre polarization coming from critics for the movie. I have my own theories about that, so hopefully you can get the big picture. I also share my thoughts on the newest Avengers: Age of Ultron trailer you can view here in case you haven’t seen it yet for some weird reason.

I also talk about my recent Guardians of the Galaxy theory about how “Awesome Mix” tells a hidden story about Peter Quill’s dad. I don’t really talk about the theory as much as I talk about the unexpected reaction I got from it. Take from it what you will, I suppose.

Stick around for our Netflix Recommendation of the Week and Movie Releases, and if you’re up for it, please rate and subscribe to us on iTunes!

Song of the Week: “Mine” by Phoebe Taylor. Her music is as cool as her hair.

Question of the Week: Do you think it’s smart for D.C. to throw all of their big characters at us so quickly with Batman vs. Superman: Dawn of Justice?