Last summer’s Guardians of the Galaxy isn’t a movie that’s well-known for being…well, subtle. It’s big and loud space opera with just a splash of comic book. What you see is what you get, and what you get is pretty satisfying.

But we sometimes forget that the minds behind our favorite movies are quite brilliant individuals, and when they’re given the chance, they’ll insert something into a movie that’s just genius. So simple that it has to be true.

In this case, that honor goes to composer Tyler Bates, who scored Guardians of the Galaxy. Along with James Gunn, they put together a soundtrack that was pretty much its own character within the film. 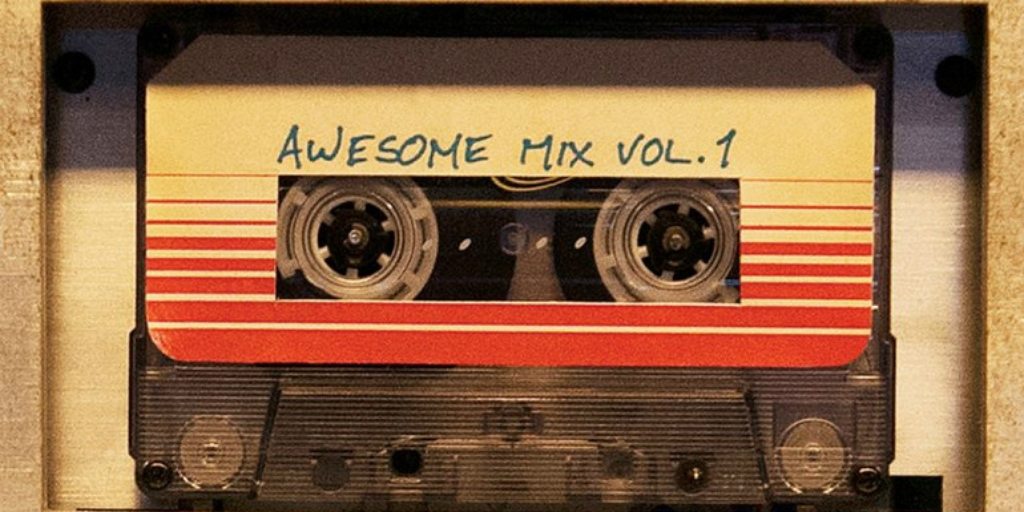 Enter “Awesome Mix vol. 1.” This is, of course, the cassette tape that main character Peter Quill (AKA Star-Lord) brings with him everywhere throughout his adventures in space. As he explains it, the songs on Awesome Mix are a collection of his mother’s favorite tunes from growing up in the 1970s.

These songs are intertwined with every major moment of the movie, from its opening to close. It sets the tone for the fun, yet almost sort of serious, adventure we’re about to witness, and it plays out beautifully.

I’ve listened to Awesome Mix many, many times on repeat during campaign missions in Destiny (seriously, this is a perfect combination of media). And until recently, I never gave the selection of these songs much thought. 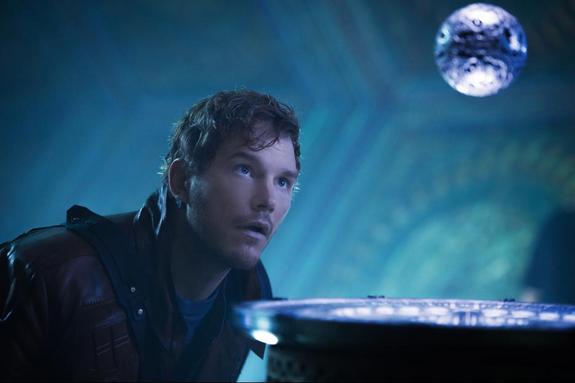 Earlier this week, a fan of the site sent me this Reddit post, putting the theory out there. I liked it, so I went ahead and ran with it. Special thanks to redditor Fellowship_9 for inspiring this excellent revelation.

He gave the basic argument, but didn’t really flesh it out much. That’s where I come in (as usual). I took a deep, careful look into these songs to see if this theory holds meaning. It didn’t take long for me to see that he was totally on to something.

So, what is the story behind the songs? It’s simple, really. These songs tell the story of how Meredith Quill met Jason of Spartax. Oh, sorry you don’t know those people? Well, you do. Meredith is Peter’s mother, and Jason is his father. 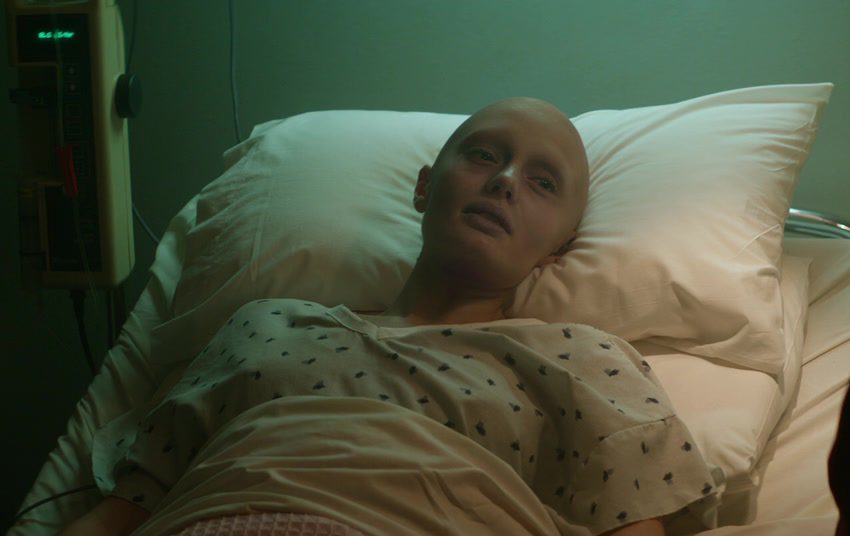 Each song in “Awesome mix” tells a different part of Meredith’s story, and it’s even in order. I’ll go through each song individually, but here’s just a quick glance in case you think you have it figured out:

Naturally, a handful of you probably figured this out on your own (especially if you’re well-versed in the comics). But for the rest of us, let me take you through the numbers.

#1 Hooked on a Feeling – Blue Swede

The first song, “Hooked on a Feeling” by Blue Swede, is not really a love song as much as it is a lust song. The lyrics illustrate the early dynamic of a relationship. It even starts with:

I can’t stop this feeling. Deep inside of me. Girl, you just don’t realize what you do to me.

What does this have to do with Meredith? Well, the way she met Jason was a bit unorthodox. Basically, he crash-landed near her home and she nursed him back to health. 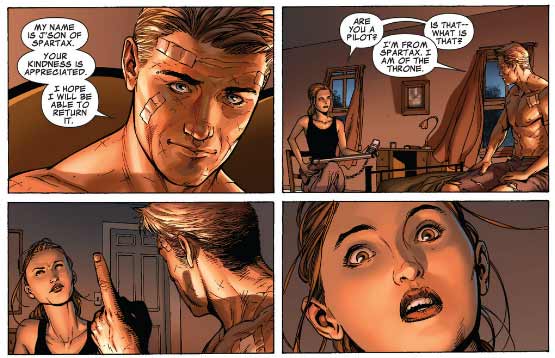 For Meredith Quill, this song represents her first encounter with Jason, the “angel” from the sky. Speaking of which, why do you think the third song is “Spirit in the Sky?” We’ll get to that.

Meredith gave Jason a place to stay while he repaired his ship. And as chemistry demands, this eventually turned to romance. 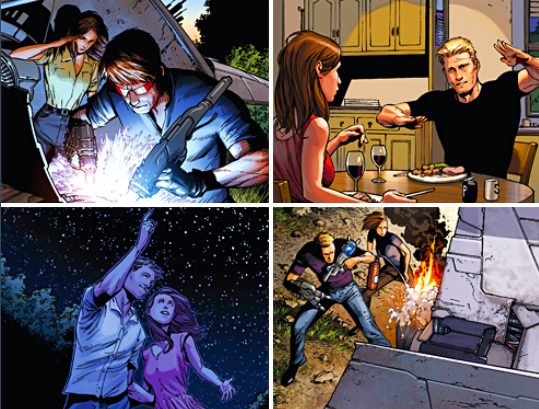 #2 Go all the Way – The Rasberries

But let’s not get ahead of ourselves. The second song is “Go all the Way,” which seems to represent Meredith and Jason consummating their relationship. Not just because of the title of the song, but also when you factor in the rock n’ roll tune with the suggestive lyrics: 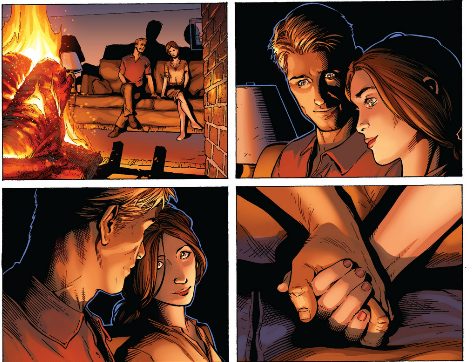 Don’t forget that in its early days, “rock n’ roll” as a genre was given its name for being…less than family friendly.

#3 Spirit in the Sky – Norman Greenbaum

I have multiple theories for this one. See, in the comics, Meredith actually witnesses Jason crashing to Earth in a spaceship. So from the outset, she knows he’s an alien. To her, he’s just this “spirit in the sky.” You could call it there.

But I think there’s a deeper meaning. The song itself is more about mortality, and how ultimately, we all have to go to that “spirit in the sky” when we die. 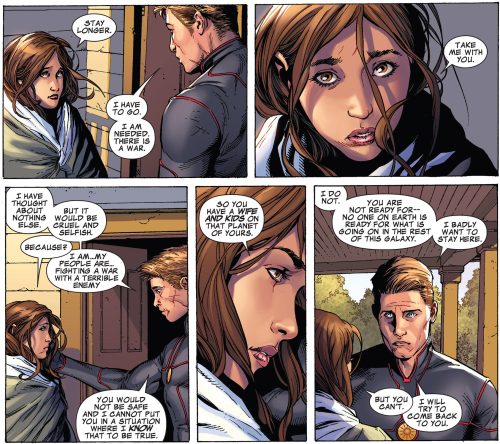 I think at this point, Meredith is realizing that Jason has to leave eventually. She even refers to Jason as an “angel” in the movie. Fitting. 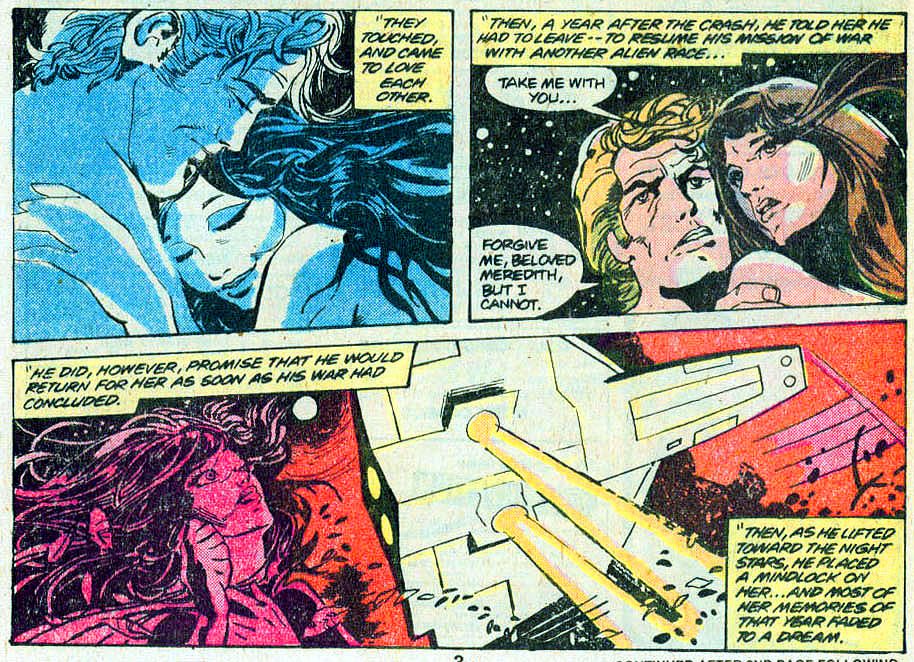 This song is literally about an alien messiah who has to save the world with rock n’ roll (David Bowie’s words, not mine). For Meredith, though, this song is more about how much Jason means to her, and how he has saved her world.

The lyrics themselves are pretty straight to the point: I’m the space invader…; Put your ray gun to my head, press your space face close to mine, love; Freak out in a moonage daydream.

#5 Fooled Around and Fell in Love – Elvin Bishop 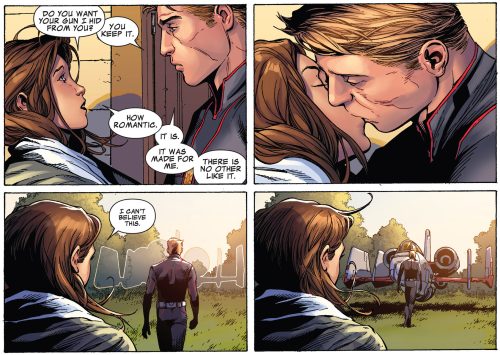 Yeah, so this one’s pretty obvious. This is literally what they did.

The deeper meaning, of course, is that at this point, Meredith is reflecting on her relationship with Jason, and even regretting the “love” part considering he has to leave. In fact, I’d wager this is the last song before Jason leaves. Because, well, the next song is…

Are you starting to see how intentional this movie soundtrack is?

Now in case you’re not familiar with the song, “I’m Not in Love” is about a couple that has gone their separate ways. And part of that process is trying to move on, even though you’re still hung up on the person.

I like to see you, but then again,
That doesn’t mean you mean that much to me. 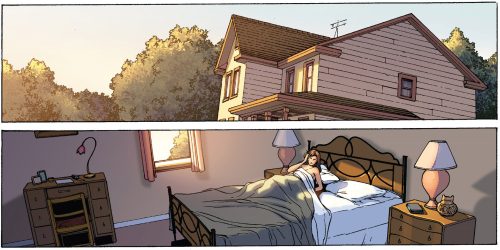 So Meredith is trying to get over Jason. I also think it’s fitting that this is by far the longest song in the playlist (over 6 minutes), which makes sense considering this was the darkest time Meredith went through for this story. But as you’ll see in a moment, that feeling won’t last long.

Oh baby, give me one more chance,
(To show you that I love you)
Won’t you please let me back in your heart,
Oh darlin’, I was blind to let you go. 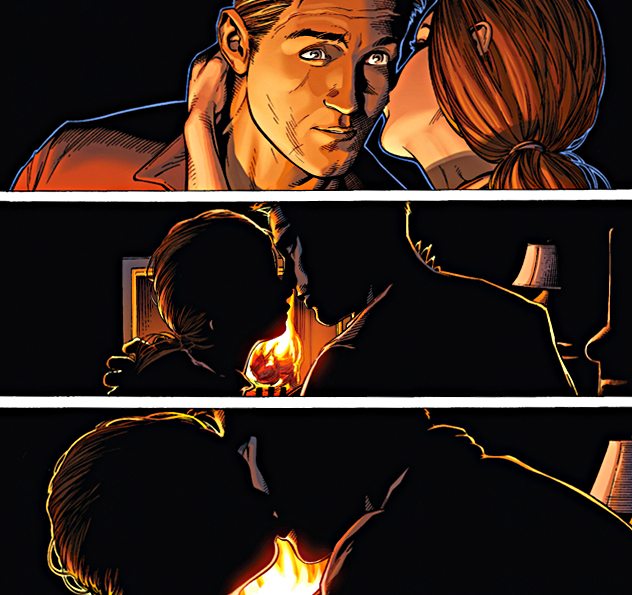 Yeah, Meredith still loves Jason and clearly wants him back. There’s even a line that fits nicely with the last song:

Trying to live without your love is one long sleepless night.

And of course, I want you back!

#8 Come and Get Your Love – Redbone

At this point, she’s pleading with him to come back and rekindle their love, probably because she now knows she’s pregnant. It’s possible Jason may have told her that he’d come back someday, as evidenced by his eventual return to get custody of his son (just saying).

In other words, come and get your son.

I think it’s pretty humorous that Meredith thinks of her illegitimate son as a “cherry bomb.”

I mean think about it. Can you imagine having to raise Peter Quill? On your own? He had to be quite the wild kid.

An alternate theory is that this song represents the actual birth of Peter Quill. Makes sense considering a cherry bomb is essentially an unpleasant explosion (in this case, expulsion).

Yes, this song is about more than just pina coladas. It’s about trying to date someone you just read about in the personal ads. I’d imagine Meredith had little luck with the dating scene after getting knocked up by an alien.

Specifically, she was trying to find someone who actually matches her preferences and current station in life as a single mother, which is essentially the heart of the song itself.

I wrote to the paper, took out a personal ad.
And though I’m nobody’s poet, I thought it wasn’t half bad.
Yes, I like piña coladas and getting caught in the rain.
I’m not much into health food, I am into champagne.
I’ve got to meet you by tomorrow noon and cut through all this red tape.
At a bar called O’Malley’s where we’ll plan our escape.

Well, we can assume from the lack of father figures in her hospital room at the beginning of GoTG that the dating thing never worked out for her.

I apologize in advance for the feels that are about to be felt.

If you watched the movie (which I sincerely hope you did considering you’ve come this far), then you know that Meredith dies in 1988 of terminal cancer. Peter is only eight years old when it happens, and it’s likely she knew about the illness some time before this. Maybe even years before she finally passed away.

This particular song speaks to getting through hard times:

These are clearly Meredith’s words to Peter, assuring him that everything’s going to be fine, even though she won’t be around much longer. I want to point out how interesting it is that Peter isn’t listening to this song in the beginning of the movie, when his mother is moments away from death.

Instead, he’s listening to “I’m Not in Love,” the song that represents moving on by denying your love for the person. Nice touch, right?

Keep in mind that this is the last song on the mixtape, and Peter was instructed not to open up the new one she gave him until she was “gone.”

Of course, Peter hasn’t really moved on (as evidenced from the song he’s playing above), until the end of the movie. As an adult, it’s “O-o-h Child” that is playing when he faces Ronan and becomes a hero. And it’s after this song that he finally opens “Awesome Mix vol. 2.” 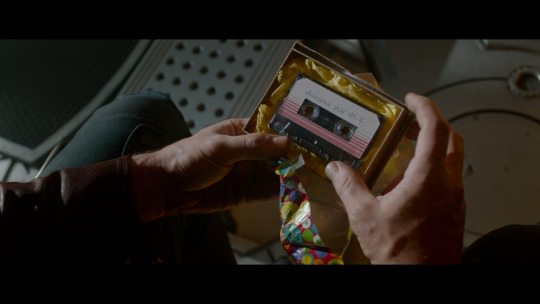 If you need me, call me.
No matter where you are,
No matter how far.
Just call my name.
I’ll be there in a hurry.
You don’t have to worry.

I’m going to go out on a limb and say Meredith realized the ending of vol. 1 was a little heavy, so she figured giving Peter a tape that opens with something as upbeat as a Marvin Gaye song works pretty nicely. 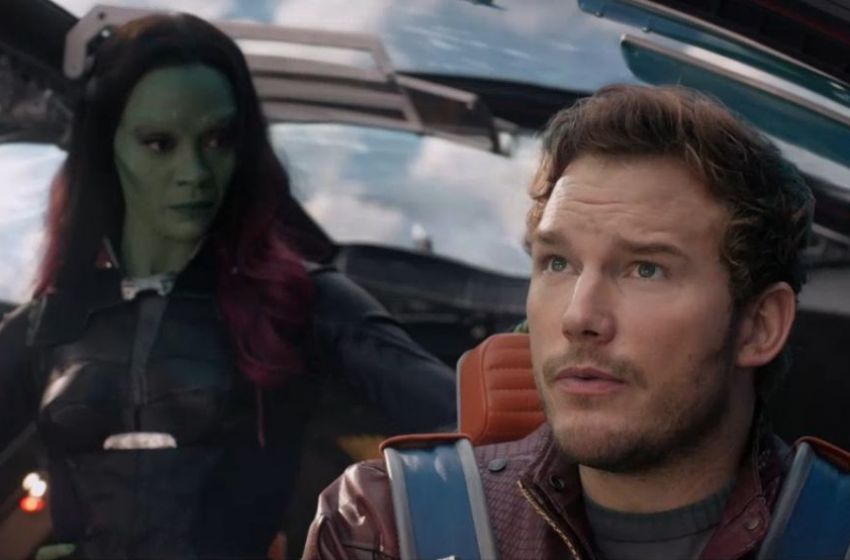 Now all I’m wondering, along with many of you I assume, is: What else does vol. 2 have up its cassette tape?

Guess we’ll have to wait until the first trailer for Guardians of the Galaxy 2 to find out. I hear Iron Man might be in it (seriously).