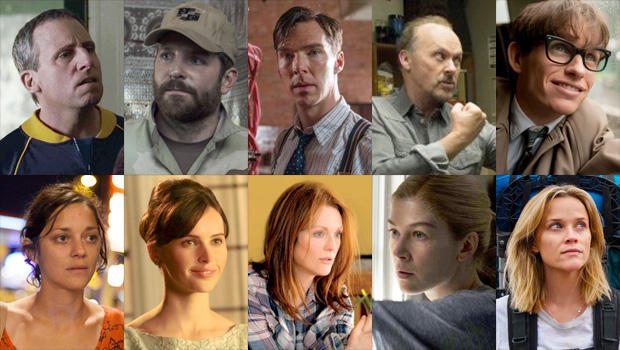 The nominees for Best Picture aren’t very surprising, save for Gone Girl getting snubbed in favor of noticeably weaker films. But first, here they are:

One of the trends you’ll notice on this list is that it’s very biopic heavy. Four of them are direct biopics, while another two are indirectly centered around the actor being the movie’s gimmick (Birdman and Boyhood). Only two of these movies are just that: Movies.

These are all great films. The only one of these I didn’t enjoy was Birdman, mostly because it’s such an uneven film made that way because it wants awards.

The only thing about it that worked for me was Edward Norton, but everything else felt so condescending toward nothing. It was just two hours of people screaming at each other for no reason but to vent out frustrations I couldn’t care about.

I sort of understand the appeal of stories that make no sense. But for me, narrative has to have cohesion, or else I’m not going to appreciate the movie as a whole. So for that reason, I’m not on the Birdman bandwagon.

Whiplash is still my favorite film of the year, and I’m also excited to see Selma and Boyhood getting their due. But Imitation Game and American Sniper beating out Gone Girl and Wild seems like a huge “We hate Ben Affleck and Reese Witherspoon” message from the Academy, even though Rosamund Pike and Witherspoon got the obligatory Best Actress nods.

And no, Interstellar doesn’t deserve to be on this list, but I feel terrible for Matthew McConaughey’s snub for best actor.

25 thoughts on “No Surprise: The Nominees For ‘Best Picture’ are Ridiculous”