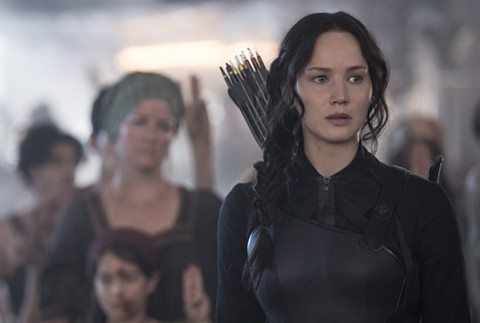 As expected, the worst book of a trilogy is, in fact, the worst movie. At least the Part 1 aspect.

Picking up right after the shattering events of Catching Fire, part 1 of the final two installments takes Katniss to her destroyed home in District 12, a not-so-subtle reminder that everything she loved has changed forever. And she’s never getting it back.

Her new set of problems are rightfully different from the ongoing threat of a battle royale with her peers. She’s now thrust into the center of a political revolution, where she’s the strategically ineffective mouthpiece for a war she doesn’t want to be a part of. While not as exciting as her previous obstacles, at least Mockingjay tries to do something new with the character. It’s just unfortunate that watching these politics play out onscreen aren’t much more scintillating than the book its based on.

The filmmakers worked hard to manufacture a climax, but it falls flat as the audience is left wondering why the film was cut in two in the first place. But in the world where sequels double profits, there was no doubt Lionsgate would capitalize. Perhaps marathons with both installments will solve this off-putting interruption.

Even without an actual Hunger Games this time around, Mockingjay: Part 1 has a fair share of action, albeit scattered in varying attempts to capture Katniss’s bravery and compassion on television for the revolutionary masses. This satire of how public relations can skew a war is brilliantly written, though forced to be a little too much of the focus of a movie that needs more going on with its characters, who stare blankly at walls with flashlights for extended scenes.

The parallels between Katniss the character and Jennifer Lawrence the movie star are obvious enough to appreciated, as several logos are shared between both properties (and a great marketing campaign utilizes their symmetry to great effect). Just as Katniss is being exploited to sell a war, Lawrence’s youth and charisma is being exploited by Hollywood to sell a franchise, and it works.

But overall, Mockingjay: Part 1 is a slow adaptation that suffers from being based on what amounts to a rough draft of a book. It still transcends its source material as these movies have consistently done, as they take us out of Katniss’s head and into the lives of other, sometimes richer, characters. Let’s just hope that the final installment is a wrap up worthy of the franchise.