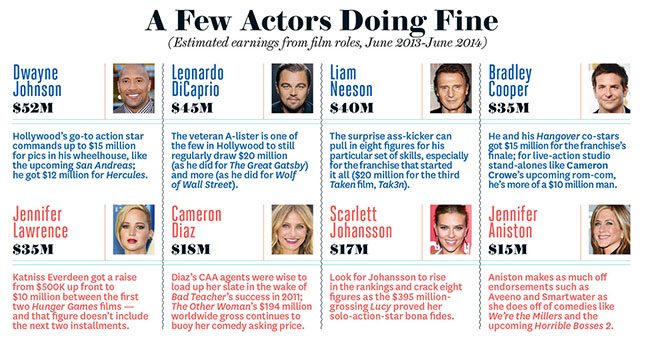 Hollywood Salaries Revealed, From Movie Stars to Agents (and Even Their Assistants) | The Hollywood Reporter:

Despite the huge sums still being raked in by such superstars as Robert Downey Jr. (his $75 million comes from his 7 percent, first-dollar slice of Iron Man 3, as well as his $12 million HTC endorsement deal) and Sandra Bullock (a 15 percent, first-dollar deal on Gravity and about $10 million more for her summer hit The Heat), most actors are feeling a definite squeeze, especially those in the middle.

“If you’re [a big star], you’re getting well paid,” says one top agent, “but the middle level has been cut out.” Sometimes with a hacksaw. Leonardo DiCaprio made $25 million (including bonuses) for The Wolf of Wall Street, while co-star Jonah Hill got paid $60,000. Granted, that’s an extreme example — Hill offered to do the part for scale (and got an Oscar nomination for his trouble).

But studio cost-cutting has meant that mid-level stars are being nickel-and-dimed in ways that would have been unheard of in the gilded ’90s (i.e., Marvel Studios’ reportedly offering Mickey Rourke a mere $250,000 to star opposite Downey in Iron Man 2). Before breaking out the violins, though, remember that even mid-level stars are far better off than most other actors. According to the most recent SAG statistics, the average member earns $52,000 a year, while the vast majority take home less than $1,000 a year from acting jobs.

Your gut reaction to these findings may be, “Who cares?” It’s hard to feel sorry for actors still reaping pretty big salaries for their roles.

But the issue, in my opinion, is that this gouging of the “middle-tier” actors causes a lack of segmentation for talented actors. To save money, studios have to skim on great secondary actors in order to afford the high-priced “star” who is consuming the budget.

And without a diverse wealth of talented actors breaking into bigger and bigger roles, you’re bound to see the same actors repeatedly being called in to breathe life in the latest adaptation, sequel, remake, reboot or what have you.

9 thoughts on “How Much Is Your Favorite Hollywood Actor Really Getting Paid?”