Jafar is the primary villain of the Disney animated classic, Aladdin, which magic carpeted its way into our hearts back in 1992.

I’m sure many of you agree that the film is easily one of Disney’s best offerings of all time, and a lot of that has to do with its complex “good and evil” narrative, as well as some fantastic music.

Rather than leave the movie alone, however, I’ve decided that it requires a little over-analyzing, and you can thank the recent live-action Disney film, Maleficent, for my mischief. Maleficient is a modern retelling of the classic story, Sleeping Beauty, which you may fondly remember as a VHS box tape that sat next to Cinderella, Snow White and maybe even Peter Pan. In this new version of Sleeping Beauty, Disney decided to turn the narrative on its head by making Maleficient a misunderstood villain.

Much like Broadway did with the Wicked Witch from The Wizard of Oz in “Wicked,” Disney retold the classic story with Maleficient actually being justifiable in her actions, though I won’t say much more for fear of ruining the film for anyone else.

At any rate, I found it valuable to do the same with Jafar from Aladdin, and I think you’ll find I have a decent case on my hands.

Right now, you’re probably remembering all of the awful things Jafar did in both Aladdin and its somewhat unofficial sequel, Return of Jafar. For the sake of keeping things simple, we’ll stick with just talking about Aladdin.

In the movie, Jafar betrays Aladdin after hiring him to do a job, tries to kill him later on, hypnotizes the sultan, tries to kill Aladdin again and then uses his power to usurp the title of sultan and force Jasmine and the real sultan to do his bidding.

After all of that, how could we possibly perceive Jafar as a good guy? Case closed, right?

Well, not necessarily. The problem here is that we have an unreliable narrator that could change the way we really watch the movie. The narrator I’m referring to is the merchant from the very beginning of the film.

If you recall, the movie starts with an unnamed merchant who is trying to sell his wares to us, the audience. To be clear, he’s as sleazy as they come, and it’s not long before he tries to sell us the magic lamp that once belonged to Aladdin.

In other words, the entire movie is a sales pitch.

The merchant is trying to prove to us (in his words) that the lamp is important because it “changed the course of one man’s life.” He then goes on to tell us the “story” of Aladdin.

The main problem here is that in order for us to want the lamp, he would have to position the main character, Aladdin, as the good guy. Even if he’s telling a “true” story, we as the audience have no idea how far he may be straying from the truth in order to convince us that having a magic lamp is a good idea.

(I’m sure what I just said has raised a lot of questions for those of you who remember how the movie ends, but stay with me for now).

To be fair, even the merchant’s telling of the story raises a lot of doubts for me that Jafar is that bad of a guy. So before we go any further, let’s go through the “Case for Jafar.”

THE SULTAN SUCKS AT HIS JOB

This is probably the most important piece of evidence we have to work with. The root of Jafar’s motivation is to replace the sultan, but why do you think he is lusting for this power in the first place?

There’s a three-pronged answer to that question:

All of these are reasons for why the Grand Vizier would be so incredibly frustrated with the current affairs of Agrabah. As we see in the opening sequence with Aladdin and Abu running from the guards, poverty and homelessness is a huge problem.

This is likely because every time we run into the sultan, he’s goofing off or playing with toys. Jafar has to hypnotize the sultan just to get him to do his job.

WHY WOULDN’T JAFAR HAVE HYPNOTIZED HIS WAY TO BECOMING SULTAN?

Jafar himself is not a sorcerer until the end of the movie, but he does have a wide array of magical tools and instruments, which includes his cobra staff, the sands of time, etc. So why does he need a lamp to make himself sultan? We’re led to believe that Iago (his parrot) convinced Jafar that he should just get the sultan to make Jafar a suitor for the princess. But if Jafar was really as cruel as the merchant portrays him, then Jafar could have simply hypnotized the sultan to concede his title.

Instead, Jafar wants to become sultan by either “wishing” himself sultan or marrying into it, which would both occur without hurting anyone (except Jasmine’s feelings).

You could argue that Jafar isn’t powerful enough to hypnotize the sultan in this way, but he seems to have plenty of other tools at his disposal. It seems unlikely that he wouldn’t be able to accomplish this without the lamp unless he was trying to do this without bloodshed.

THE MOVIE FROM JAFAR’S PERSPECTIVE

Let’s review. We have a Grand Vizier named Jafar who is fed up with how the sultan is refusing to take his job seriously. Poverty and homelessness run rampant, the princess is antagonizing her suitors and the sultan is just standing by.

The law says Jasmine has to marry within the next few days, but she refuses because she wants love. So Jafar decides he needs to take matters in his own hands.

He’s been hypnotizing the sultan so far to keep things running, but that’s not enough anymore. Jafar decides he needs to become sultan himself and right what the sultan has wronged, while also allowing Jasmine to marry whomever she wants.

Meanwhile, Jasmine runs away and falls for a homeless thief who only likes her for her looks (as evidenced by how he describes her to the genie).

Of course, the sultan is old and could die soon. If Jasmine, his only heir, doesn’t marry in time, then the city will fall into turmoil. But Jasmine selfishly neglects her responsibility until the guards finally find her.

Jafar discovers with the sands of time that Aladdin is the key to getting into the Cave of Wonders, where the lamp resides. He hires him to get the lamp, but his stupid monkey touches something and the whole thing is collapsing. Deciding not to take any chances, Jafar takes the lamp and lets Aladdin suffer the consequences of his actions, but Abu steals the lamp back as they become trapped.

Jafar then has no choice but to save the city by hypnotizing the sultan into arranging a marriage between him and Jasmine. Of course, the “prince” is Aladdin, who tricked the genie into breaking him out of the cave without wishing for it and then made the promise that he’d free the genie later (even though he apparently didn’t intend to keep that promise).

Aladdin sneaks into Jasmine’s chambers (at night) and whisks her away across the world. Oh, and he lies to her again about who he really is by claiming he was a prince all along. Jafar knows that the “prince” is a fraud, so he arranges to have him disposed of before he ruins the entire kingdom. But Aladdin escapes thanks to the genie, whom he betrays by going back on his promise to free him. Aladdin decides it’s more important to keep the genie around in order to keep the “prince” act up.

But Jafar realizes that the “prince” is actually Aladdin, so he steals his lamp back and commands the genie to make him sultan.

He also wishes for power, hoping that it will protect Agrabah from the country that just found out their prince they sent to marry Jasmine was attacked by a tiger. Jafar even places the kingdom on a hill to make it a more secure stronghold. Alas, Aladdin returns and tricks Jafar into becoming a genie, thus imprisoning him.

We could also talk about Return of Jafar (which starts with the same merchant singing “Arabian Nights” by the way), but it’s pretty much the same story.

Oh, and I’m not the only person to argue for the case of Jafar. In fact, there is an entire musical based on this concept called Twisted, which you can watch in its entirety below: The only answer I can think of is that he wants to sell the lamp because it is rare. It’s no ordinary lamp! This is the lamp that Aladdin used to defeat the evil Jafar! Hear the tale of the magical Genie would can summon entire parades that disappear without any explanation!

Can you see how his hyperbole and twisting of the story would convince someone that the lamp would be cool to have? Even if the story isn’t accurate? This is the same sales tactic that people make even today, but especially during those times when street merchants would shout extravagant sales pitches from the corner.

Am I over-thinking this? Of course. But I didn’t get into this because I want to prove something is true. Rather, I recognize the value in turning a story on its head to learn a new lesson. 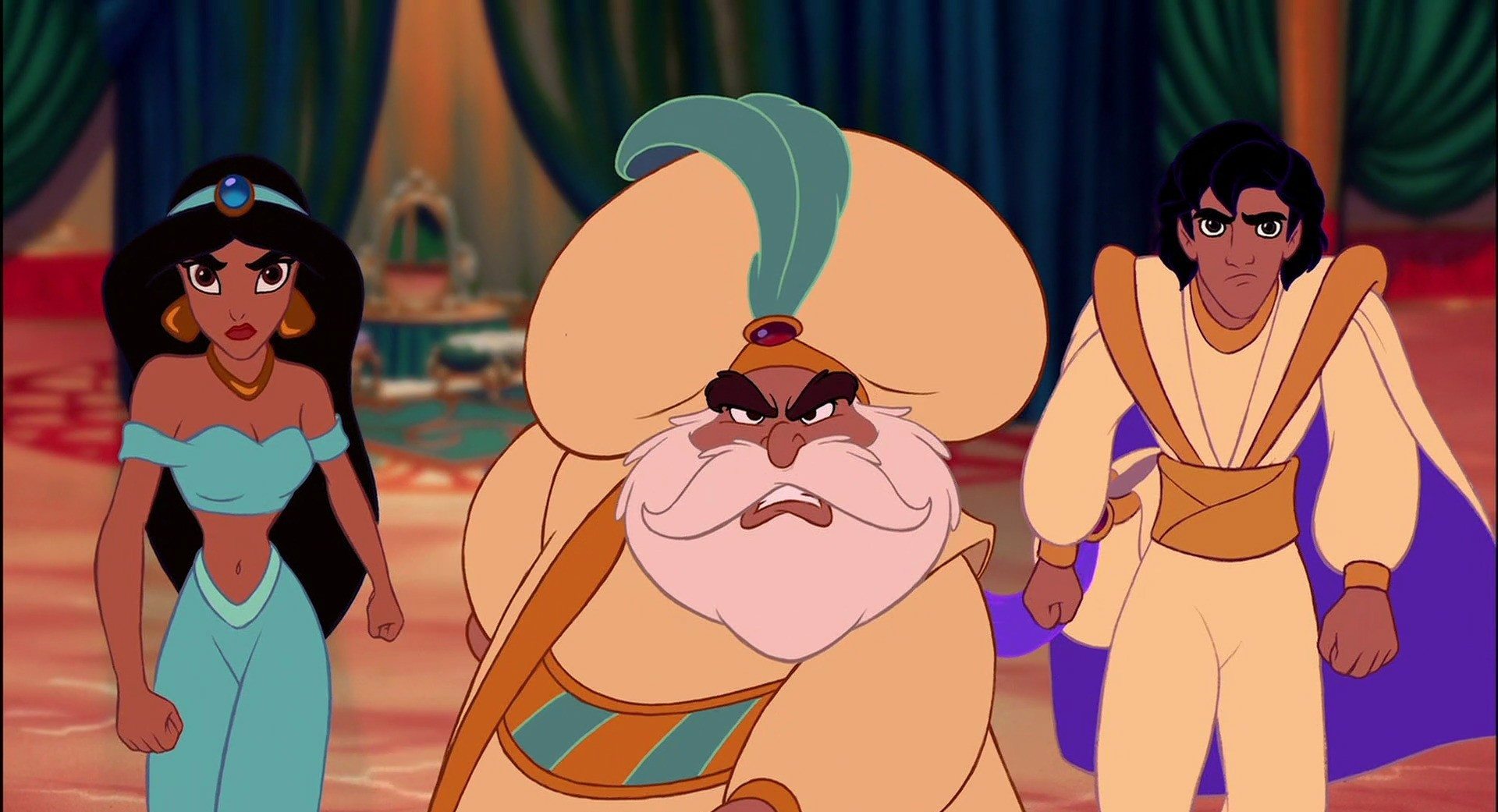 The message here is that sometimes, things aren’t all what they seem. Sure, Aladdin is probably a cool guy and Jafar was a jerk, but my article may have made you doubt that a little. And that’s just because it’s easy to twist a story and blur the lines between good and evil (even though they are clearly distinct at the same time).

That said, which version of Jafar do you prefer?

42 thoughts on “What if Jafar Was Good All Along?”