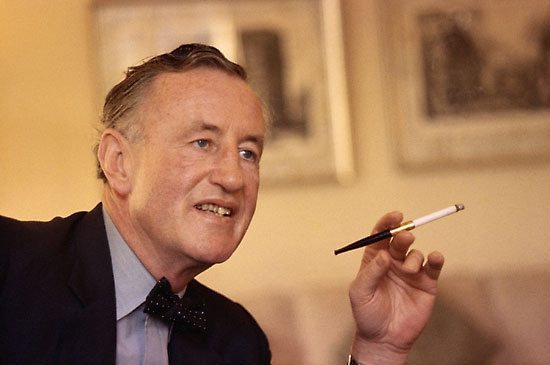 Ian Flemming created one of the most iconic figures of modern times. James Bond. He wrote the original novels that would someday become immortalized in one of film’s biggest, and greatest achievements: the first real franchise for movies.

I recently watched a documentary about the James Bond franchise, called Everything Or Nothing. It’s the full story of how James Bond came to be, both in print and on film, leading up to the release of the latest Bond film, Skyfall. The documentary was definitely fascinating for a Bond fan like me, and you can catch the whole thing on Netflix.

One of the biggest takeaways I took from the documentary was how Ian Flemming became a literary success. He came into writing as the Cold War began, and he went into writing almost like it was his life’s mission to translate his experiences and imagination into a book. The character of James Bond is really what Ian envisioned himself to be, which is why the lore would become such a staple. James Bond represents pure escapism.

When he first wrote the books, he would write over 2,000 words a day, everyday. He would write in very short sentences, the documentary explains, in order to capture the characterization of James Bond. What immediately comes to mind is how this has carried on in every James Bond movie (well maybe not the Timothy Dalton ones), where the titular character responds in short, clever responses to what happens around him.

I obsess over making sure my sentences count, and I prefer to keep them as prolonged as I can without disrupting the flow of what I’m trying to say. With Flemming, we have a writer who understood that this doesn’t always work for characterization.

When crafting dialogue, which is something I’m poor at, it is essential to say as much as you can in very few words. This is a lot like copywriting, but with a twist: the character you’re reflecting has to be believable. This isn’t always the case with advertising, since their time on screen is short. The dialogue of a character in a story, however, has to have a consistent and precise personality.

We see this in James Bond, for sure, especially since Flemming put so much of his own personality into the character. That makes crafting other characters a huge difficulty when writing, which is a main reason why most people are not that great at it. Empathy, understanding, and world-building are key in writing.

There is one more thing I took away from Flemming’s success. When he first wrote the James Bond novels, he made them exactly the way he wanted to. He used themes that would not go over very well with many people, such as the use of womanizing, overt sexual themes, and even sadism. The result was initial backlash.

It would have been easy for Flemming to give up at that point and conform his style of writing in order to please the masses and find success. How many of us have been faced with that decision? Instead, Flemming wrote what he wanted to write, and the ultimate result was that he was a pioneer. His work became legendary because it was something no one had done before.

The whole story of how James Bond became immortalized in film is full of huge risks and gambles, hence the title of the documentary, Everything or Nothing. I highly encourage anyone to see it, whether they be a Bond fan or just a lover of rags to riches stories.

Regardless, I will be sure to write according to these principles inspired upon me from one of the most underrated  writers in his time: Write what you want to write about. Take risks. Put yourself into your work. Make it count.

Of course, putting yourself into your work may not be a great idea if you’re not that interesting. Mean?